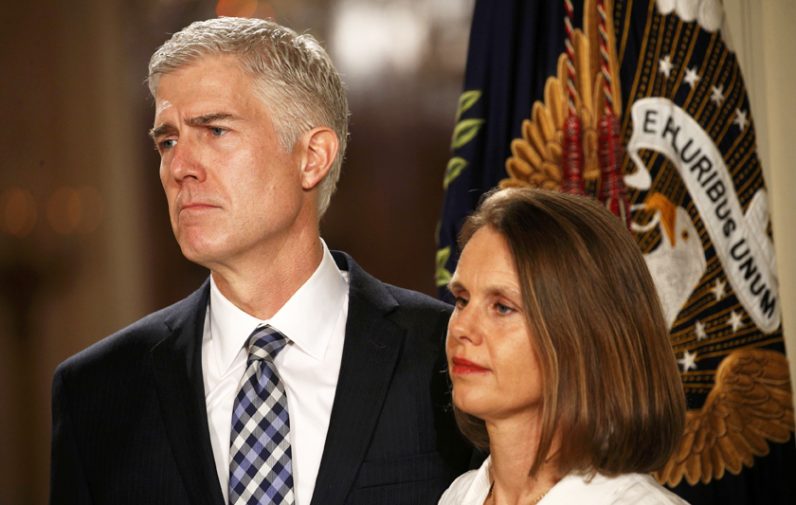 Judge Neil Gorsuch stands with his wife, Marie Louise, at the White House in Washington Jan. 31 as U.S. President Donald Trump announces his nomination of the jurist to be a U.S. Supreme Court justice. If confirmed, Gorsuch will fill the seat that has been empty since the death of Justice Antonin Scalia last February. (CNS photo/Kevin Lamarque, Reuters)

WASHINGTON (CNS) — President Donald Trump nominated Judge Neil Gorsuch to fill the seat on the U.S. Supreme Court that has been empty since the death of Justice Antonin Scalia last February.

Gorsuch is a man the country needs, Trump said in announcing his nominee the evening of Jan. 31. He added that his pick for the high court already has had bipartisan support. “Judge Gorsuch has outstanding legal skills, a brilliant mind, tremendous discipline,” he said.

When Trump announced his choice at the White House, in the audience was Maureen McCarthy Scalia, the widow of the late justice. One of the couple’s children also was present: Father Paul Scalia, a priest of the Diocese of Arlington, Virginia.

In his remarks, Gorsuch said he was thankful for friends, family and faith giving him balance. He also said he was honored and humbled to be chosen as a nominee to the nation’s highest court. He described Scalia as “lion of the law” and said he misses him.

He said he respects the fact that Congress, not the courts, writes new laws. “It is the role of judges to apply, not alter, the work of the people’s representatives. A judge who likes every outcome he reaches is very likely a bad judge, stretching for results he prefers rather than those the law demands.”

“It is the role of judges to apply, not alter, the work of the people’s representatives. A judge who likes every outcome he reaches is very likely a bad judge, stretching for results he prefers rather than those the law demands.” — Judge Neil Gorsuch

Several news outlets reported that hundreds of demonstrators held a rally outside the Supreme Court building to protest Trump’s choice of Gorsuch. Pro-life organizations, however, were quick to praise the president’s selection of someone who they said will “carry on the legacy” of Scalia.

Gorsuch, judge of the U.S. Court of Appeals for the 10th Circuit, is 49, making him the youngest Supreme Court nominee in 25 years. He was born in Denver. He currently lives outside of Boulder, Colorado, with his wife and two daughters.

He lived in the Washington area as a teenager when his mother, Anne Gorsuch Burford, was appointed by President Ronald Reagan to head the Environmental Protection Agency. Gorsuch attended the Jesuit-run Georgetown Preparatory School where he won a national debate championship.

Gorsuch has the typical qualifications of a high court justice. He graduated from Columbia, Harvard and Oxford, clerked for two Supreme Court justices and also worked for the Department of Justice. He also is an adjunct law professor at the University of Colorado.

In 2009 he wrote “The Future of Assisted Suicide and Euthanasia,” a book critiquing the “death with dignity movement” and arguing against the legalization of assisted suicide and euthanasia.

Gorsuch hasn’t written a ruling specifically on abortion but he has strong views on religious liberty. He sided with the Little Sisters of the Poor in their challenge of the contraceptive mandate of the Affordable Care Act. And in Hobby Lobby Stores v. Sebelius, in June 2013, the 10th Circuit ordered the federal government to stop enforcement of the federal mandate against Hobby Lobby, the Oklahoma-based Christian chain of retail arts and crafts stores. 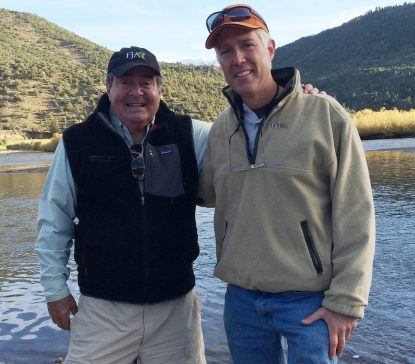 Gorsuch is an Episcopalian. Scalia, who had been one of six Catholic members of the court, was often described as its most conservative voice and known for his strict interpretation of the Constitution’s intent.

“All too often, our efforts to protect unborn children and other vulnerable humans have been overridden by judges who believe they have a right to impose their own policy preferences,” Carol Tobias, president of National Right to Life, said in a statement.

“We are heartened that Judge Gorsuch appears to share Justice Scalia’s view that federal judges are constrained to enforce the text and original intent of constitutional provisions, and on all other matters should defer to democratically elected lawmakers,” Tobias added.

Priests for Life, the American Life League, the Susan B. Anthony List and other groups echoed those sentiments.

“In the coming days, we will mobilize the pro-life grass-roots nationwide and in key Senate battleground states to urge the Senate to swiftly confirm,” she said in a statement. “Should pro-abortion Democratic Senators choose to filibuster this immensely qualified nominee, they do so at their own political peril.”