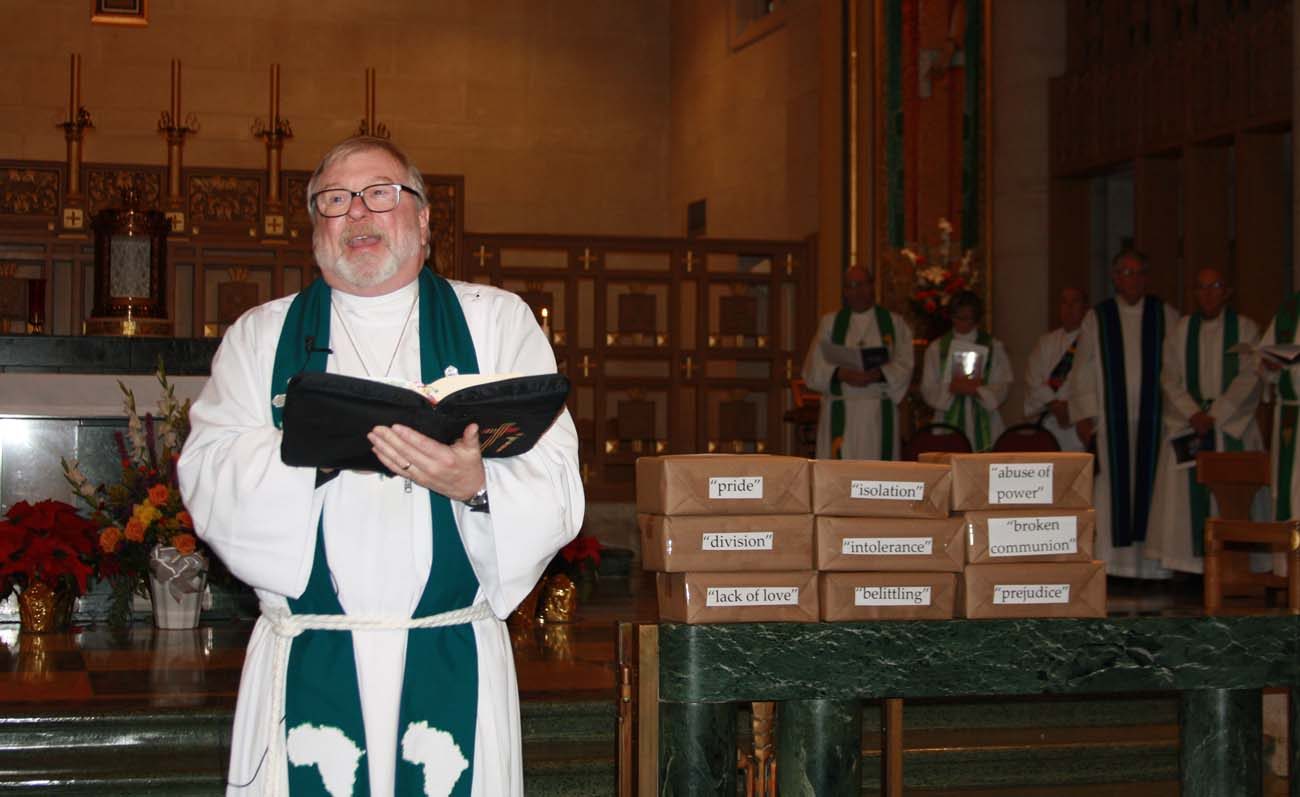 Bishop Rodger C. Prois, of the Western Iowa Synod of the Evangelical Lutheran Church in America, proclaims the Gospel reading at a Jan. 22 prayer service for Christian unity in Sioux City, Iowa. Next to Bishop Prois are boxes crafted to resemble stones that build a wall that have on them words that divide people of faith. (CNS photo/Joanne Fox, the Globe)

“Thank you for taking the time out of your day, even though you might be missing the AFC and NFC championships, although, I must confess, I really don’t care who wins,” said the bishop, a self-proclaimed Denver Broncos fan.

Blessed Sacrament Parish hosted the Sioux City-wide ecumenical prayer service for the annual Week of Prayer for Christian Unity, observed this year Jan. 18-25. The week had as its theme “Reconciliation — The Love of Christ Compels Us,” taken from Chapter 5, verses 14-20, of the Second Letter to the Corinthians.

In his introductory remarks, Bishop Nickless emphasized the concept of unity by citing a scriptural reference.

“Jesus Christ prayed at the Last Supper that ‘they all may be one,'” he reminded those present.

“It is important we keep doing what we are doing here today — especially in dialogue, but most important in prayer,” the bishop continued. “We must remember God can accomplish what we cannot.”

The ecumenical celebration included an invitation for the congregation to pray to God to break down the stones in the wall that kept them from a relationship with the Lord. Individuals brought up crafted brown boxes to resemble stones with the words written on them: “broken communion,” “intolerance,” “division,” “abuse of power,” “isolation,” “lack of love,” “belittling,” “prejudice” and “pride.” They were stacked on the communion rail. Later, those boxes were moved to the floor in front of the altar to form a cross.

A combined choir from the area’s worshipping communities came together prior to sing a special hymn for the service. About 70 individuals raised their voices in the song, “Agnes Dei,” just before the readings.

Bishop Rodger C. Prois, of the Western Iowa of the Evangelical Lutheran Church in America, also offered remarks following the Gospel story of the prodigal son and its theme of separation.

“This is hope,” he said, looking out over the congregation.

The bishop reminded those present to think about the “choreography” of the return of the son to his father.

“Remember, the son truly did not come to the father,” he said. “The father went to his son as the son approached his home.”

Bishop Prois continued, “God also moves to the object of his love, so you are no longer lost. You are no longer separated. As God said, ‘I have made all things new.’ You are all born again in Jesus Christ.”

“Scripture teaches us that before you bring your offering to the altar, you must be reconciled with your brother or sister,” he said.

“Without that reconciliation, we continue to build walls,” Bishop Prois said, gesturing to the stack of “stone” boxes.

Bishop Prois praised Pope Francis for his encouraging recommendation that Christians should be building bridges and not walls.

Bernadette Rixner, a parishioner at Blessed Sacrament and one of the organizers of the event, felt the service opened her eyes to new ways to collaborate with other Christian faiths.

“As a cradle Catholic, I felt there were certain aspects of my faith I had to keep ‘guarded,'” she told The Catholic Globe, Sioux City’s diocesan newspaper. “I now feel I need to be more open to hearing what other Christians are saying about their faith.”

She added, “Through the process of putting this service together with others, I have been impressed how much ‘church’ is working with other faiths and finding the common ground we do share.”