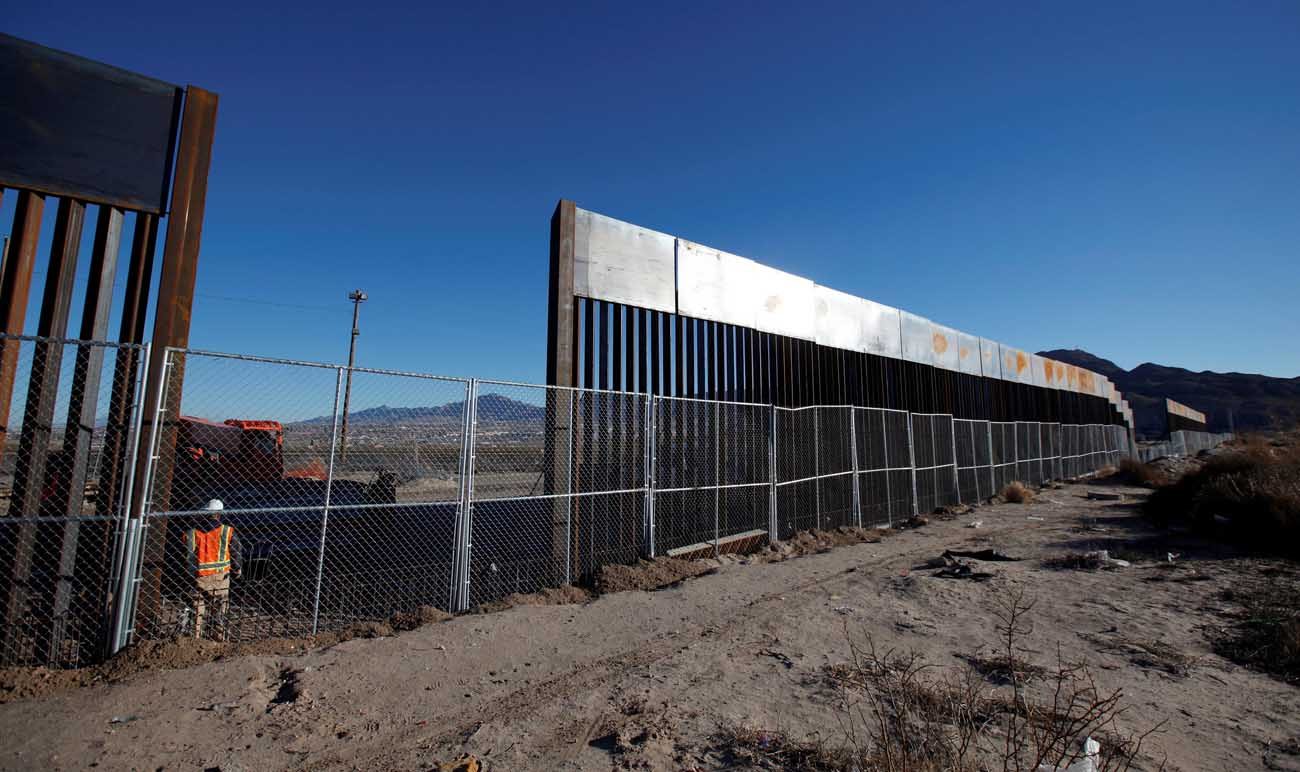 A worker stands next to a newly built section of the U.S.-Mexico border wall in 2016 at Sunland Park, U.S. opposite the Mexican border city of Ciudad Juarez, Mexico. President Donald Trump enacted two executive memorandums to deal with security, including one that calls for construction of a wall along the U.S.-Mexico border. (CNS photo/Jose Luis Gonzalez, Reuters)

WASHINGTON (CNS) — President Donald Trump enacted two executive memorandums to deal with the country’s security, including one that calls for construction of a wall along the U.S.-Mexico border.

“This will stem the flow of drugs, crime and illegal immigration” along the southern border, said White House press secretary Sean Spicer, who reiterated that Mexico will end up paying for the wall. The memorandum also would create more detention space for people who illegally cross into the United States, he said.

Spicer said Trump would work with Congress on finding money to pay for the construction, noting, “there are a lot of funding mechanisms that can be used.”

The U.S. Conference of Catholic Bishops has formed a working group to closely monitor executive memorandums and legislation on immigration, but no reaction from the bishops was available immediately after Trump signed the memorandums Jan. 25 at the Department of Homeland Security.

However, Bill O’Keefe, vice president for government relations and advocacy at Catholic Relief Services, which works in Central America, said Catholics “cannot escape our responsibility to the poor and vulnerable who are suffering around the world.”

“Our position consistently has been while nations have a right to maintain their borders, people fleeing violence, as we in Central America see every day … we have a responsibility to welcome them as refugees and offer them safe protection,” he told Catholic News Service hours before Trump signed the memorandums.

O’Keefe said the United States, “the richest and most powerful country,” must address the needs of people who “for circumstances outside of their control are forced to flee to our shores.” The country’s actions could include doing more “to address the root causes of migration by helping governments and civil society to meet their own needs.”

“You have American people out there working” and their tax funds are sent to places that do not enforce the law, he said at the White House briefing Jan. 25.

The executive memorandums did not address the issue of DACA, the Deferred Action for Childhood Arrivals program, nor did they discuss emigration from the Middle East, which Spicer said would be addressed later in the week.

In 2006, President George W. Bush signed the Secure Fence Act, which authorized several hundred miles of fencing along the 2,000-mile U.S. frontier with Mexico. The Associated Press reported that legislation led to the construction of about 700 miles of various kinds of fencing designed to block both vehicles and pedestrians, primarily in Texas, New Mexico, Arizona and California. It said the final sections were completed after President Barack Obama took office in 2009.

AP reported that a 1970 treaty with Mexico requires that structures along the border cannot disrupt the flow of rivers that define the U.S.-Mexican border along Texas and 24 miles in Arizona.

During a February 2016 visit to Mexico, Pope Francis traveled to the U.S. border at Ciudad Juarez and pleaded for the plight of immigrants. He said those who refuse to offer safe shelter and passage were bringing about dishonor and self-destruction as their hearts hardened and they “lost their sensitivity to pain.”

During a Jan. 12 conference call promoting National Migration Week, Jan. 8-14, Bishop Joe S. Vasquez of Austin, Texas, chairman of the U.S. bishops’ Committee on Migration, said it was “important to respect the security of this nation … but never to lose that human face to this reality” of migration.

“We need to bring about some change,” he added. “We hope the president will work with us and with Congress as well to pass some laws that will be humane and respectful.”

The PICO National Network, the largest network of congregations and faith-based groups in the country, including Catholics, challenged the executive memorandum on sanctuary cities.

“Retaliating against local communities because they refuse to follow immoral policies is part of an emerging pattern of President Trump of not only bullying people who dare to disagree with him, but isolating and further marginalizing people who are different than him,” said Eddie Carmona, campaign director for PICO National Network’s LA RED campaign. “Such behavior is inconsistent with the long-held notion that America was a place of opportunity for all.”