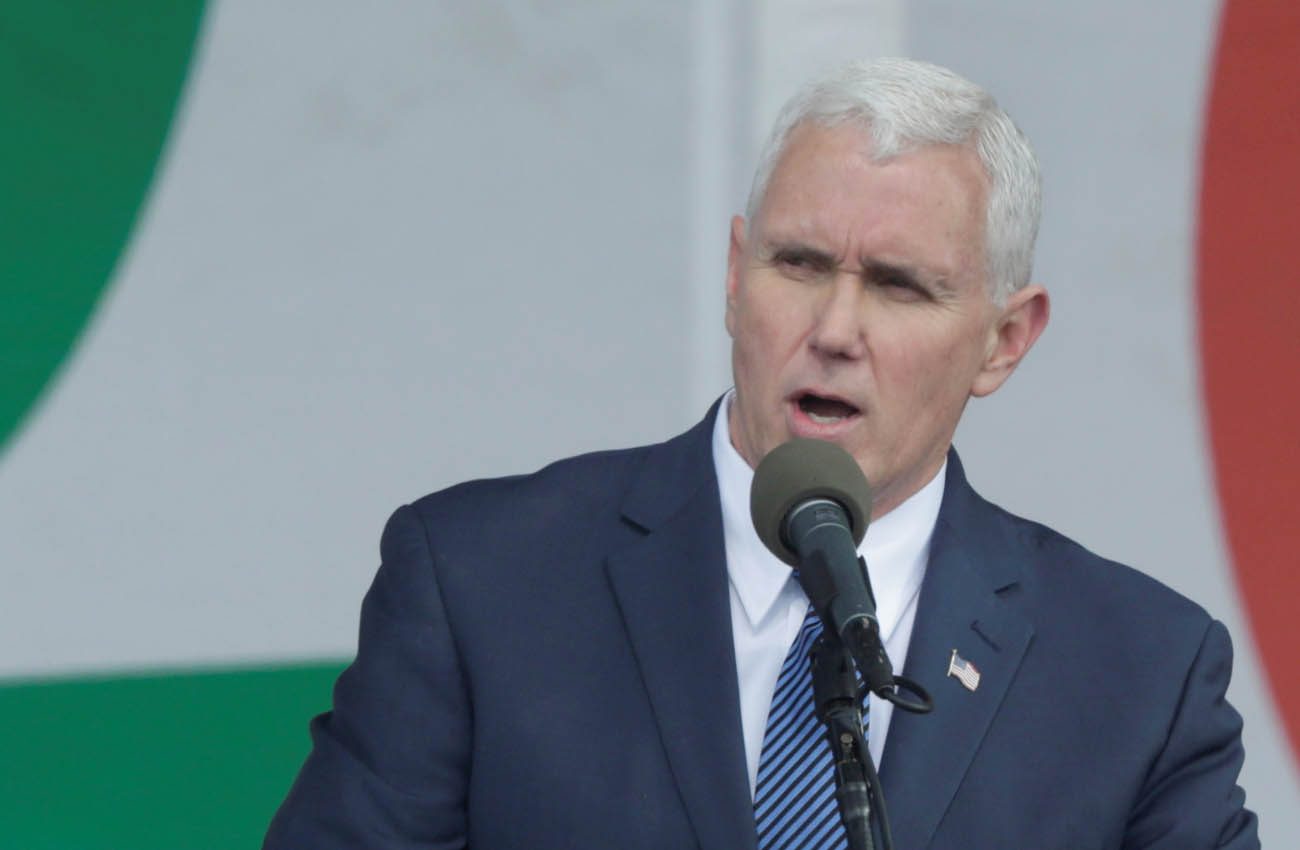 WASHINGTON (CNS) — The leaders of the pro-life movement are used to having the ear of the president, as they had with Ronald Reagan, George H.W. Bush and George W. Bush.

During their respective administrations, they addressed the March for Life via telephone, but this year the event marking the Roe v. Wade anniversary had the highest-ranking government official ever to address the crowd in person.

“Life is winning again in America, and today is a celebration of that progress,” the official, Vice President Mike Pence, told the March for Life rally on the National Mall Jan. 27.

“More than 240 years ago, our founders declared these truths to be self-evident — that we are, all of us, endowed by our Creator with certain unalienable rights and that among these are life, liberty and the pursuit of happiness,” he said. “Forty-four years ago, our Supreme Court turned away from the first of these timeless ideals, but today, generations hence — because of all of you and the many thousands who stand with us in marches all across the nation — life is winning again in America.”

Pence said President Donald Trump had asked him to address the rally, which took place under a sunny sky with temperatures in the 40s. “He asked me to thank you for your support, for your stand for life and your compassion for the women and children of America.”

Early that morning, Archbishop Christophe Pierre, apostolic nuncio to the United States, conveyed a message from Pope Francis to the March for Life, saying the pontiff was “profoundly grateful for this impressive testimony to the sacredness of every human life.”

“As he has made clear, so great is the value of human life and so inalienable the right to life of an innocent child growing in a mother’s womb that no alleged right can justify a decision to terminate this life,” the nuncio said.

Pope Francis “trusts that this event, in which so many American citizens speak out on behalf of the most defenseless of our bothers and sisters, will contribute to a mobilization of consciences in defense of the right to life and effective measures to ensure its adequate legal protection,” Archbishop Christopher said.

The evening before the march, Pence also hosted organizers at the Executive Office Building next to the White House. As a member of Congress, he had addressed the March for Life in 2002, 2003 and 2007.

“Our president is a man with broad shoulders, a big heart,” Pence said at the rally. To loud cheers, he added, “His vision, his energy, his optimism are boundless, and I know he will make America great again.”

He pointed to Trump’s Jan. 23 executive action reinstating what’s called the Mexico City Policy, which bans tax dollars from funding groups that promote or perform abortion in other countries. He said the administration would work with Congress to stop taxpayer funding of abortion “and devote those resources to health care services for women across America.”

On Jan. 24, the House passed the No Taxpayer Funding for Abortion Act, making the 41-year-old Hyde Amendment permanent. The amendment, which has had to be approved each year as part of the budget for the U.S. Department of Health and Human Services, prohibits tax dollars from paying for abortion except in cases of rape, incest or threat to the woman’s life. The Senate has yet to act on a companion bill, but Trump has said he will sign it into law when the measure reaches his desk.

“I urge you to press on,” Pence told the rally. “Let your gentleness be evident to all. Let this movement be known for love, not anger. Let this movement be known for compassion, not confrontation. When it comes to matters of the heart, there is nothing stronger than gentleness. I believe we will continue to win the minds and hearts of the rising generation if our hearts first break for mothers and their unborn children and meet them where they are with generosity, not judgment.”

“You can sense the joy in people today,” Kristan Hawkins, president of Students for Life, told Catholic News Service. “I hope it’s not lost.”

Earlier in the week, march organizers predicted at least 50,000 would be there. But there were at least that many at the rally, and before it was over, marchers, including many busloads of parochial schoolchildren, covered the full width of Constitution Avenue, en route to the Supreme Court, for at least seven blocks.

Trump drew considerable attention earlier in the week by telling Republican lawmakers at a Philadelphia retreat that there could be as many as 600,000, eclipsing the Woman’s March Jan. 21, which had an estimated 500,000.

Jeanne Mancini, president of the March for Life organization, acknowledged that new spotlight.

“There has been a lot of talk about numbers over the past week. The Women’s March has talked about numbers and Facebook likes, and people keep asking me about our numbers for the March for Life. Well, it is hard to add up how many have come here over the least 44 years, but that really isn’t the point,” she said.

“The only number I care about, and the only number that we all care about is — 58 million. Since 1973, 58 million Americans have died as a result of abortion,” Mancini said. “We stand here today for them — for the little innocent children who have lost their lives to abortion. We also stand here for the mothers who regret their abortion decision.”

Conway took the podium before Pence.

“Your courage, your conviction and your faith are impressive and consequential,” she told the crowd. “This is a new day, a new dawn for life. Why are we here? What does it mean to stand together to be part of this incredible movement, to face criticism, ridicule, and laws and lawmakers (against life)? It means to protect and promote the most previous gift in the world — the gift of life. It means to stand up stand tall and stand together against the indifference and the indefensible and on behalf of babies in the womb.

Conway added, “Allow me to make it very clear — we hear you, we see you, we respect you, and we look forward to working with you, and yes, we march, we walk, we run and endeavor forward with you.”

Congresswoman Love reminded the rally, “Every year, children, born and unborn, have the potential to open up our world and take us to places and spaces we never imagined.”

In her remarks, Ernst vowed to reintroduce legislation to strip Planned Parenthood of federal funding. She had done that in 2015, but “back then, we did not have a president who respected life” and President Barack Obama vetoed the legislation.

Smith, who is co-chair of the bipartisan Congressional Pro-Life Caucus, called Obama “the abortion president” who “did serious harm.”

“No human rights abuse however need be forever,” said Smith. “You and I are part of the greatest human rights struggle on earth. Because we recognize and enthusiastically accept our duty to protect the weakest and most vulnerable and to tangibly assist women in crisis … to pray, fast and tenaciously work to protect women and children from the violence of abortion.”

PREVIOUS: Cardinal Dolan: If sanctuary of the womb is violated, no one is safe

NEXT: Jubilant crowd gathers in Washington for annual March for Life