Protesters take to streets of downtown Washington on Inauguration Day 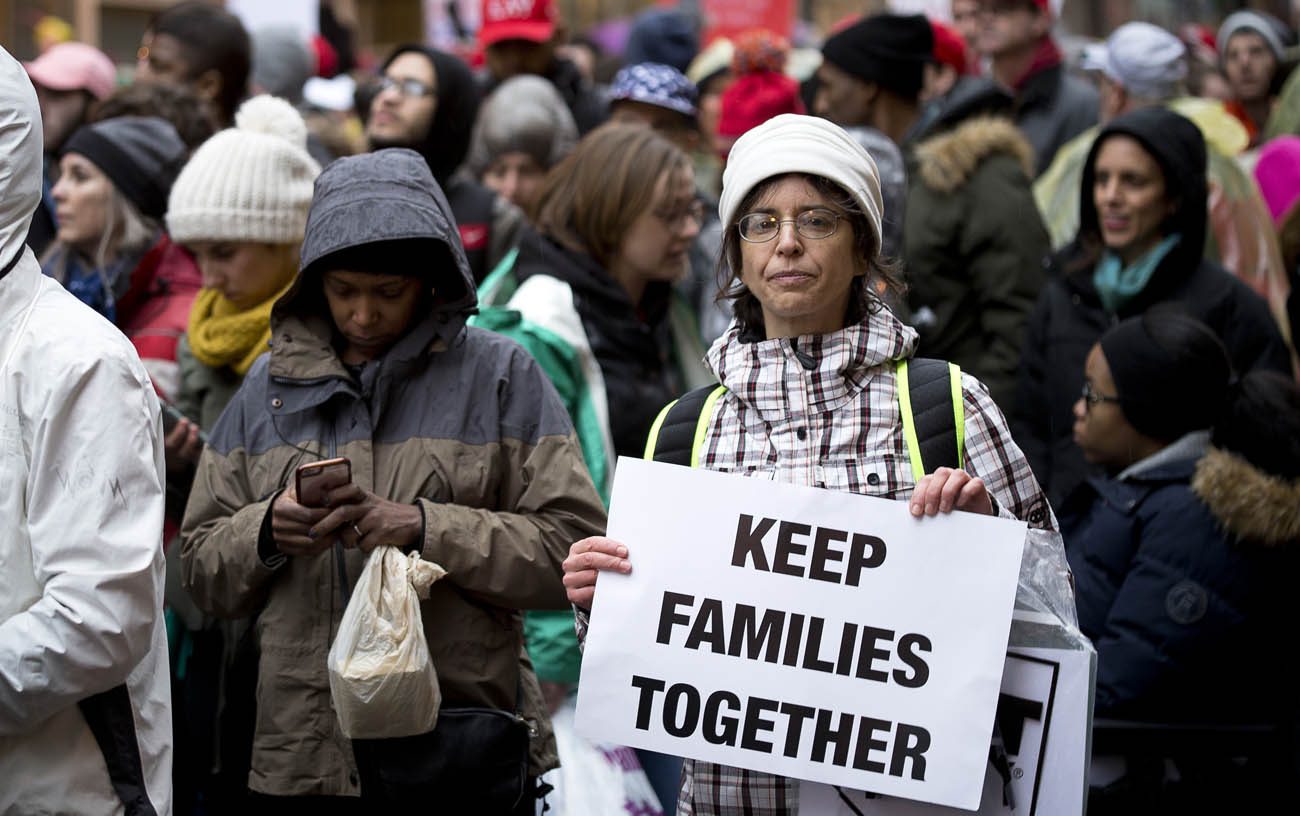 A woman holds a pro-immigration sign in Washington prior to the start of U.S. President Donald Trump's swearing-in as the country's 45th president Jan. 20. (CNS photo/Tyler Orsburn)

WASHINGTON (CNS) — The inauguration parade route was an unexpectedly strange place for Suzzett and David Faby to find themselves in as they headed to celebrate Donald Trump, the man the Catholic couple voted for in the 2016 presidential election.

Suzzett Faby, wearing a purse and other clothing with the colors of the American flag, sheepishly looked around as she found herself outnumbered by more protesters than like-minded Trump supporters on the streets of of Washington Jan. 20, hours before her candidate was sworn in as the nation’s 45th president.

“They even throw us dirty looks,” said David Faby, wearing a puzzled look that many Trump supporters carried with them as they walked through the overwhelming crowds that turned out to protest Trump and his presidency. When the motorcade carrying him and President Barack Obama to the U.S. Capitol drove by, there were more boos and expletives than cheers near the United States Navy Memorial, about a mile from the swearing-in ceremony.

Katherine Samolyk, of Washington, had a front-row seat along the route, but she wasn’t there to celebrate.

As a Christian, she said she felt she had to protest what she sees as Trump’s intolerance toward other people but also the system of wealth inequality he represents. Christian teachings are against greed, she said, against the lack of distribution of wealth.

“The free market will not solve problems away anymore,” she told Catholic News Service.

One problem that’s particularly pressing, she said, is the care of the environment, something Samolyk, who grew up Catholic but no longer practices, admires in Pope Francis and is worried about when it comes to President Trump.

“We’ve elected a person who doesn’t believe in global warming,” she said. “God gave us this planet and it’s a sin to destroy it.”

She draped a homemade flag with an image of the earth on it and the words: “An appeal to heaven: Let charity trump greed,” one of the many signs that lined the fences Trump would see along the way on his way to and from the White House.

In the distance, others like Heleodora Vivar, a street vendor from New York, yelled into the air slogans in Spanish, trying to call attention to the fear some immigrants have when it comes to the new president. Does he realize that he’s scared children with his words? she asked.

“It’s not just his talk about deportations,” she said, but also the racism she feels he has fostered among some groups in the country.

Though there isn’t a day that goes by without a protest in Washington, most demonstrators are confined to the area in front of the White House and sometimes around the Washington Monument. The Inauguration Day protests, however, were scattered throughout large areas in downtown Washington, where diverse crowds of young and old turned out to make their displeasure, ire, or sorrow heard. Other protests took place leading up to it, producing vitriol from both sides.

Outside the Deplora-Ball, a Jan. 19 inauguration celebration, protesters yelled at Trump supporters and the others angrily yelled back with bad words and gestures of their own.

However, some appreciated the opportunity it provided those who never get worked up about much, to participate in the gifts of democracy, which allow a plurality of voices to talk at the same time, even when opposing sides refuse to hear what the other has to say.

There are a lot of concerns shared by all sides, said Suzzett Faby, and it would be nice if all could hear each other. Her concerns include care for homeless vets, education, the country’s national security and unemployment, she said, adding that she believes Trump can do something about it.

Like her husband, Suzzett said she felt the odd sensation of being a minority in a crowd that didn’t share her views and sang all around her chants against the man she’s put her faith in.

“It feels horrible,” she said.