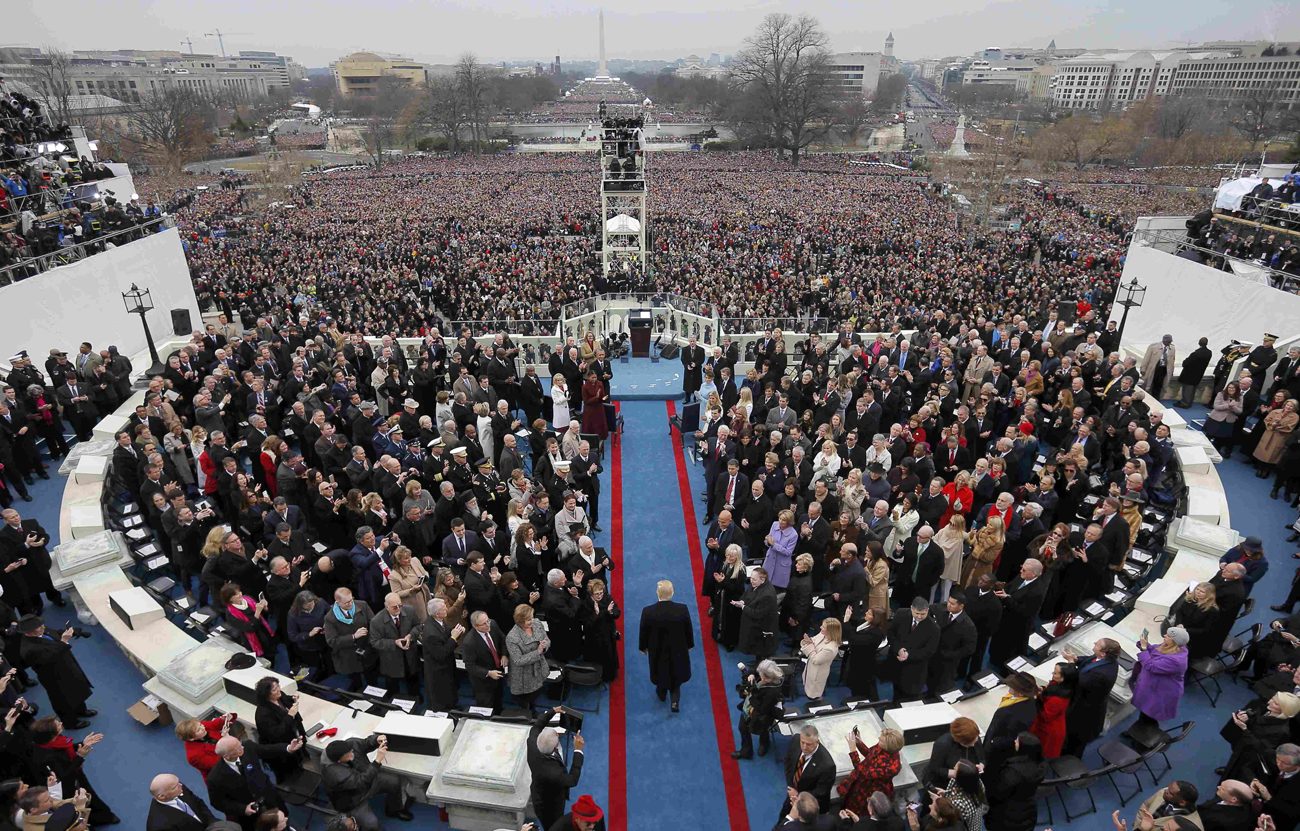 U.S. President-elect Donald Trump is applauded as he arrives for his Jan. 20 swearing-in as the country's 45th president at the U.S. Capitol in Washington. (CNS photo/Rick Wilking, Reuters) 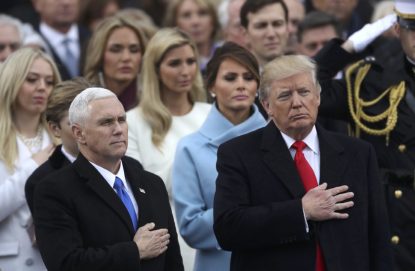 U.S Vice President Mike Pence and President Donald Trump stand for the singing of the national anthem after Trump’s swearing-in as the country’s 45th president at the U.S. Capitol in Washington. (CNS photo/Carlos Barria, Reuters)

WASHINGTON (CNS) — Words of congratulations as well as caution emerged from political and religious leaders as President Donald J. Trump was inaugurated Jan. 20.

Pope Francis sent best wishes and prayers to incoming President Trump shortly after he took the oath of office.

“I offer you my cordial good wishes and the assurance of my prayers that almighty God will grant you wisdom and strength in the exercise of your high office,” the pope’s message said.

Saying that the human family faces “grave humanitarian crises” that demand “farsighted and united political responses,” the pope said he would pray that Trump’s decisions “will be guided by the rich spiritual and ethical values that have shaped the history of the American people and your nation’s commitment to the advancement of human dignity and freedom worldwide.”

In a Jan. 18 letter to the new president, national, state and local organizations said that DACA had become one of the country’s “most successful immigration policy initiatives … fostering economic growth and strengthening national security.”

The letter asked Trump to continue DACA despite his promises to immediately end President Barack Obama’s executive actions on immigration.

Obama introduced DACA in 2012 as an initiative to provide work permits and relief from deportation to young and adults and children who arrived in the U.S. before their 16th birthday. Applicants must undergo background checks, pay a fee and meet certain educational requirements to qualify under DACA. 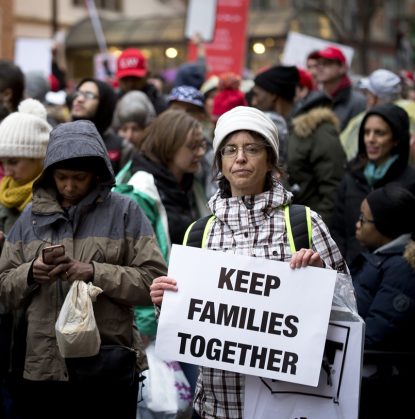 A woman holds a pro-immigration sign in Washington prior to the start of U.S. President Donald Trump’s swearing-in as the country’s 45th president Jan. 20. (CNS photo/Tyler Orsburn)

The letter also cited bipartisan support for the Bar Removal of Individuals who Dream and Grow our Economy measure, or BRIDGE Act, which was introduced near the end of the last Congress in December by Sen. Dick Durbin, D-Illinois, and Sen. Lindsey Graham, R-South Carolina. The bill would allow the young immigrants under DACA to stay in the country for three more years.

Whether lawmakers planned to reintroduce the bill in the new Congress is not known.

The presidents of organizations representing women religious and superiors of congregations of men religious offered to support the Trump’s presidency and urged him to join them in promoting the common good.

They expressed concern about the “fractures and divisions” that “continue to threaten the well-being and freedom of all Americans and those who have fled in fear to our shores and borders,” writing that America’s diversity has been the country’s strength.

“In order to be ‘one nation under God,’ we believe we are all called to live as true ambassadors or reconciliation, in all places and all times,” the leaders said. “We believe we need a president who transcends party politics and personal agendas in order to heal deep divisions that threaten the stability of our nation. We strongly believe that we all need to be dedicated to respectful and dignified civil discourse with those whose positions different from our own.”

The letter concluded by inviting the Trump to join them in “constant prayer that God might act in our hearts and through our actions as leaders.”

Prior to the inauguration, other faith leaders joined an ecumenical People’s Prayer Service at Metropolitan AME Church in Washington. Participants prayed for justice for marginalized communities throughout the country.

The event offered a “a vision for America that is inclusive and welcoming of all,” said United Church of Christ Bishop Dwayne Royster, political director of People Improving Communities through Organizing, PICO, National Network, an association of faith-based organizing groups.

Bishop Royster said in a statement announcing the service that people of faith are called “to advocate for the marginalized while serving as a moral compass for the country.” He cited the need to “preserve the Affordable Care Act … (and) to provide sanctuary to vulnerable communities and resisting inhumane policies” in announcing the service.

The Washington-based organization In Defense of Christians congratulated Trump and Vice President Mike Pence on their inauguration and urged the new administration to make the plight of Christians in the Middle East a policy priority.

The organization said Christian communities in Iraq and Syria particularly are in need of assistance to rebuild their homelands after suffering severe losses in years of war. “It is in the interests of the United States and international community to do so,” the organization said in a statement.

The organization noted that the administration of President Barack Obama declared that atrocities by the Islamic State group against Christians and other minority communities was genocide in 2016 and that such a designation affords the new administration on opportunity to ensure the “continued survival of the ancient ethnic and religious minorities of the Middle East.” 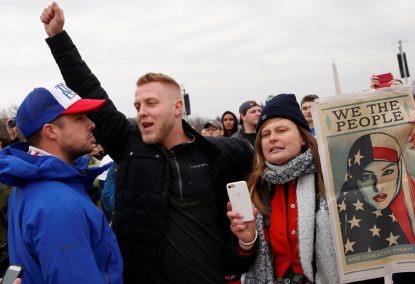 A supporter of U.S. President-elect Donald Trump confronts a demonstrator on the National Mall during Trump’s swearing-in as the country’s 45th president at the U.S. Capitol in Washington. (CNS photo/Shannon Stapleton, Reuters)

Among Catholic leaders responding on Twitter, Boston Cardinal Sean P. O’Malley thanked God for the freedom Americans enjoy because of the sacrifices of previous generations. He also offered a prayer for Trump and for the country to “recommit to care for the needy.”

Two days before the inauguration, the Ignatian Solidarity Network, a social justice education and advocacy organization based at John Carroll University in suburban Cleveland, invited Jesuit parishes, schools and universities to pray for people who fear Trump’s proposals to deport immigrants.

Prime Minister Justin Trudeau of Canada offered congratulations on Trump’s inauguration and said that the partnership between the two countries built throughout history is “essential to our shared prosperity and security.”

“Together, we benefit from robust trade and investment ties, and integrated economies, that support millions of Canadian and American jobs. We both want to build economies where the middle class, and those working hard to join it, have a fair shot at success,” Trudeau’s message said.

Canada looks forward to working with Trump, his administration and the new Congress on the path to restoring middle class prosperity in both countries and to develop a safer and more peaceful world, the prime minister added. 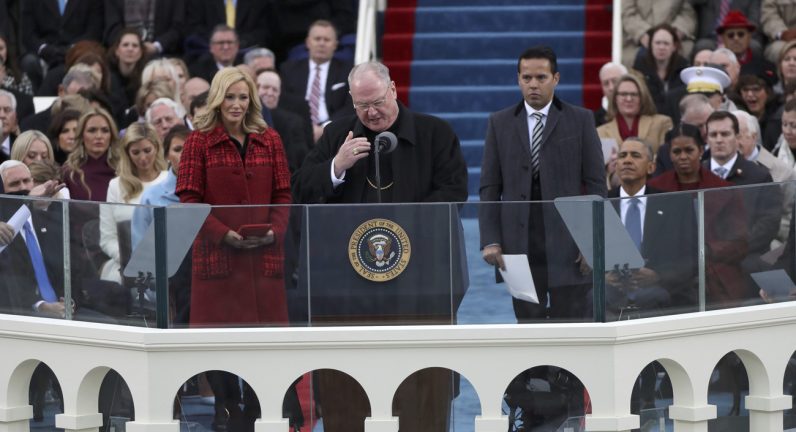 PREVIOUS: ‘We will be protected by God,’ Trump declares in inaugural address

NEXT: Protesters take to streets of downtown Washington on Inauguration Day