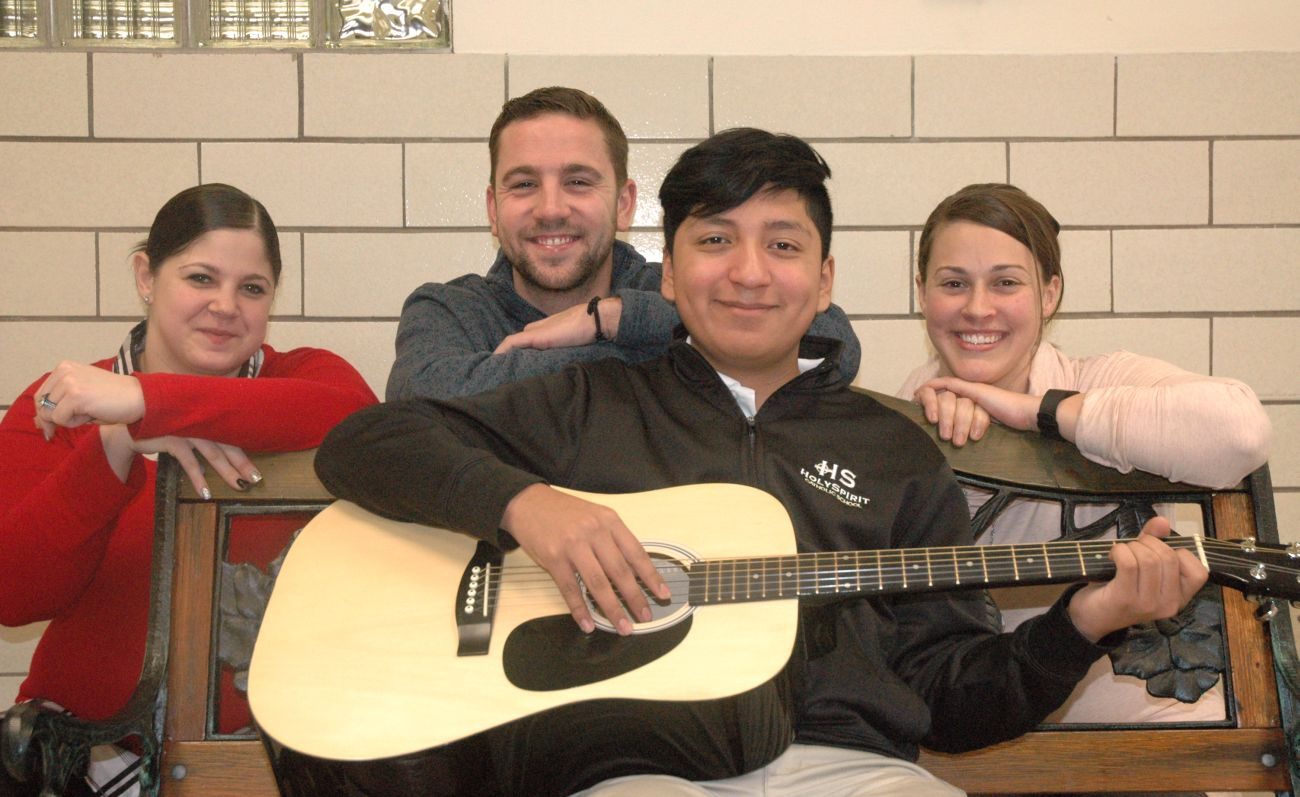 Ethan Velazquez, a 12-year-old at Holy Spirit School in Indianapolis, plays his guitar alongside school staff members Stacy Inman-Davidson, Lucas Stippler and Lauren McLaughlin. The three staffers are credited with their quick actions to help save the life of Ethan, who had a heart attack on the school playground in May 2016. (CNS photo/John Shaughnessy, The Criterion) .

INDIANAPOLIS (CNS) — The fear flashes in their eyes again as the educators recall rushing to the child who was lifeless on the ground.

In one moment, 11-year-old Ethan Velazquez raced across the playground at Holy Spirit School in Indianapolis, playing soccer with his friends. In the next moment, he collapsed — becoming immediately unresponsive, showing no signs of breathing.

“There was the feeling, ‘Oh, my God! Are we doing the right thing?'” said McLaughlin, a kindergarten teacher. “He didn’t have a pulse. When we had done one round of 30 compressions, he started to gasp. Then he lost all coloring, he started to foam at the mouth, and there was no pulse again.”

As Stippler kept telling Ethan, “Stay with us, Ethan! Stay with us!” the other two continued CPR, trying to revive his heart and keep oxygen flowing into his lungs and brain until the ambulance arrived.

When it did, the paramedics took over Ethan’s care, and the emotions suddenly poured from the three educators.

“Stacy had lost a child in a drowning,” said Rita Parsons, principal of Holy Spirit School. “When the ambulance came, she just broke down. It’s amazing the strength she had.”

As the paramedics lifted Ethan into the ambulance, he was still lifeless.

The call Jenny and Enrique Velazquez, Ethan’s parents, received about their son shook them to their core.

Jenny received her phone call first, telling her that Ethan had collapsed on the playground and to come quickly.

She rode in the front seat of the ambulance as it rushed her son to Riley Hospital for Children in Indianapolis. During the frantic ride, she turned to watch the paramedics give Ethan CPR a third time, followed by an attempt to revive his heart with electric shock paddles. It didn’t work.

In the ambulance, Jenny phoned her husband at work, crying as she described everything that had happened.

When their call ended, Enrique had his own talk with God. He said when he got to the emergency room his son looked “really bad. … I thought he had passed away.”

Ethan’s doctors decided to put him in an induced coma. And the family waited. “The doctor said there might be brain damage because he’s not sure there was enough oxygen to his brain,” Enrique told The Criterion, newspaper of the Archdiocese of Indianapolis.

As each day passed, the prayer tree for Ethan grew. Its roots were in the friends and even strangers from Holy Spirit Parish and the school community. It also extended to family members in Costa Rica, Guatemala, Mexico and Spain.

“We’re close to God,” Enrique said. “My faith is strong and big, but this is pain. I don’t want this to happen to anyone.”

Three days after Ethan was rushed to the hospital — as his mother prayed the “Our Father” at her son’s bedside — all the prayers were answered as Ethan awakened from the coma. Subsequent medical tests showed he was health and had no consequences from his collapse.

The doctor “was impressed,” Enrique said, “He couldn’t explain what happened. I said, ‘Doctor, it’s God.'”

Since that May afternoon in 2016 when Ethan collapsed, he has celebrated his 12th birthday. His recovery was celebrated at a school Mass. Everyone in the church that day gave Ethan a standing ovation.

He’s back to playing soccer, swimming, playing his guitar and reading the Bible — all the things he used to do. The only difference is that the doctor attached a pacemaker to Ethan’s heart — as a precaution.

“Most people who saw me on the playground that day probably didn’t think I was going to make it,” he said. “God gave me a second chance at life.”

He feels the same way about Inman-Davidson, McLaughlin and Stippler.

“They care for me,” Ethan said. “They look out for everyone in the school. And they would do anything to save a life.”

“God stayed with us,” his mother said. “God gave me my son again.”

“It happened in the right moment in the right place with the right people,” said Ethan’s father, noting how quickly the Holy Spirit staff members responded to give his son CPR. “I know that’s God. God is love.”

Stippler, an after-school recess worker who is studying to be a nurse, shakes his head in wonder whenever he sees Ethan. When he returned to school, the boy gave him a card and a bracelet, which is inscribed with a verse from the Book of Joshua: “Be strong and courageous. Do not be terrified; do not be discouraged, for the Lord your God will be with you wherever you go.”

Shaughnessy is the assistant editor of The Criterion, newspaper of the Archdiocese of Indianapolis.