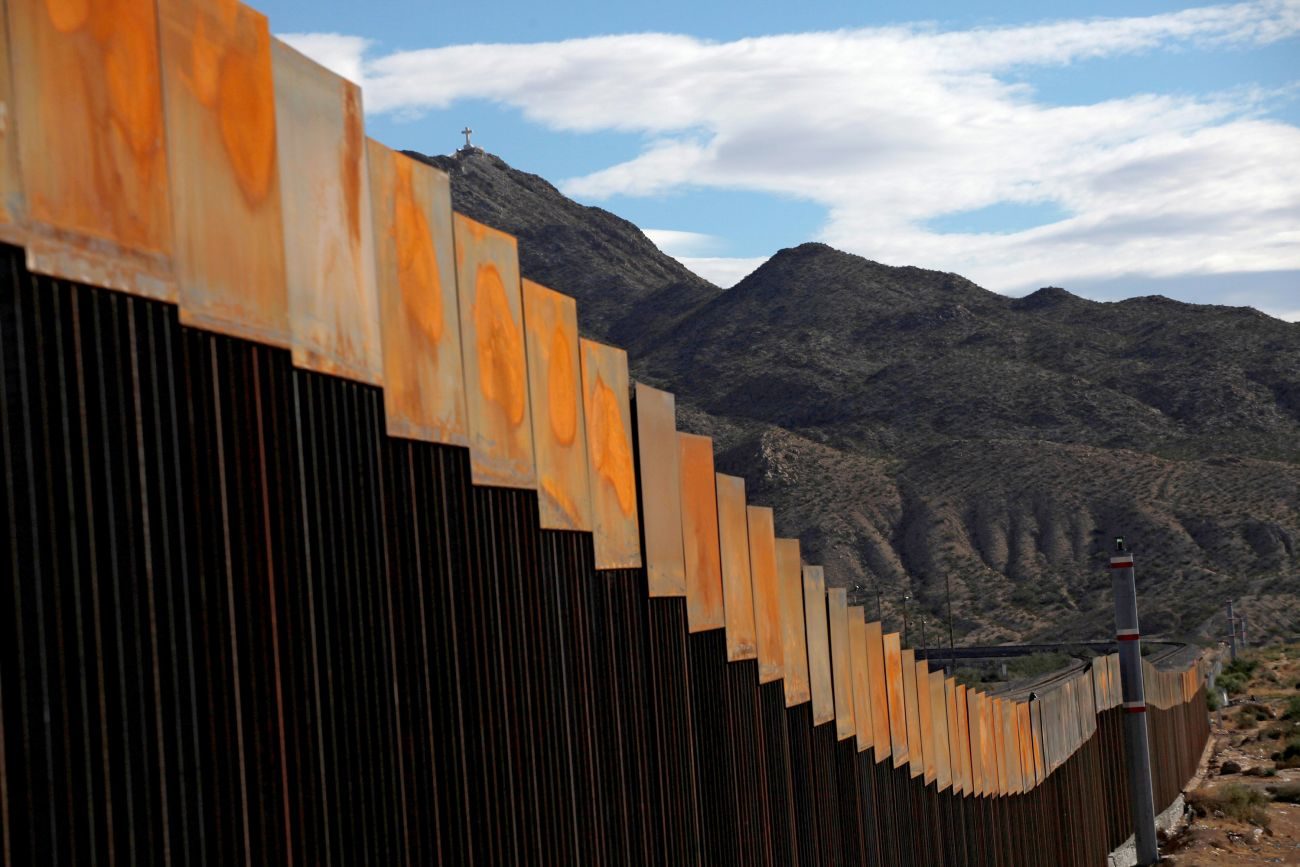 A photo taken in 2016 shows a newly built section of the U.S.-Mexico border wall at Sunland Park, N.M., opposite the Mexican border city of Ciudad Juarez, Mexico. President Donald Trump enacted two executive memorandums to deal with security, including one that calls for construction of a wall along the U.S.-Mexico border. (CNS photo/Jose Luis Gonzalez, Reuters)

The reactions came within hours of Trump’s signing of executive memorandums on national security Jan. 25 during a visit to the Department of Homeland Security. The memorandums authorized the construction of a wall along the U.S.-Mexico border and directed John F. Kelly, secretary of homeland security, to look at how federal funding streams can be cut for cities and states that illegally harbor those in the country without legal permission.

Agencies cited the words of Pope Francis in criticizing the president’s actions and pledged to support and serve migrants in the United States.

“Pope Francis has urged people not to close the door on migrants and refugees,” Dominican Sister Donna Markham, president and CEO of Catholic Charities USA, said in a statement. “In concert with the Holy Father, we believe we must move from attitudes of defensiveness and fear to acceptance, compassion and encounter.

“As the U.S. Catholic bishops have said, this is not an either/or situation for us,” Sister Donna added. We can protect our citizens and, at the same time, we can welcome newcomers. Our commitment to care for those who are most vulnerable resides at the core of our faith.”

The PICO National Network, the largest network of congregations and faith-based groups in the country, including Catholics, challenged the executive memorandum on sanctuary cities.

“Retaliating against local communities because they refuse to follow immoral policies is part of an emerging pattern of President Trump of not only bullying people who dare to disagree with him, but isolating and further marginalizing people who are different than him,” said Eddie Carmona, campaign director for PICO National Network’s LA RED campaign. “Such behavior is inconsistent with the long-held notion that America was a place of opportunity for all.”

“When Nuns on the Bus visited the U.S.-Mexico border in 2014, we walked along the wall and listened to the stories of communities that have been torn apart for decades. That is the reality experienced by border communities: The wall is there and it affects the daily life and commerce of the people.

“Federal appropriations for border security have grown to $3.8 billion in FY2015, from $263 million in FY1990, and fencing exists for hundreds of miles along our southern border,” she said in a statement.

The Washington-based Columban Center for Advocacy and Outreach recalled Pope Francis’ words at the close of the Year of Mercy that concluded in November in which he decried a global “epidemic of animosity and violence” toward strangers, immigrants and refugees who often are considered a threat.

Trump’s signings “presents false and inhumane responses” to the harsh reality of poverty, violence and conflict that cause people to migrate, the center said in a statement.

“As people of faith, we are called to both address the root causes of migration and seek policies of welcome toward our migrant sisters and brothers. We stand against any policies that seek to build a wall, inhumanely detain women and families, end sanctuary cities, conduct immigration raids, limit migration based on a person’s country of origin and further militarize the border,” the statement added.

Pax Christi USA sided with “our immigrant brothers and sisters living in fear of deportation and separation from their families.”

“No one flees their countries of origin on a whim,” a statement from the Catholic peace organization said. “We honor the multiplicity of reasons people migrate to the United States, many of which are poverty, gang violence and terror. People are not the enemy, but that is the myth we are being told by President Trump. Building a wall is the visual symbol of these political lies.”

The Franciscan Action Network expressed concern that the country would be turning its back on refugees after Trump’s actions.

“The Gospels call us to welcome the stranger, so as people of faith we advocate and support the rights and dignity of all people,” Patrick Carolan, the Franciscan network’s executive director, said in a statement. “The United States was built by immigrants and we must continue to protect our immigrant and refugee sisters and brothers and keep families together.”

The U.S. cannot be blinded to the despair of migrants and refugees, including those from Syria and different faith traditions, said Gerry Lee, executive director of the Maryknoll Office for Global Concerns.

“Pope Francis proclaimed that ‘refugees are not pawns on the chessboard of humanity. They are children, women, and men who leave or who are forced to leave their homes … the flesh of Christ is in the flesh of the refugees.’ The faithful response is not to build a wall or to discriminate against Muslims, but to open our hearts and our homes to refugees of all faiths in recognition of our sacred call to protect and nourish life. If we refuse to welcome refugees in urgent need, we risk becoming like those we claim to deplore,” Lee said.

Elsewhere, the Jesuits of Canada and the United States said they were concerned about the administration’s actions.

“Increasingly, migrants come to the U.S. fleeing violence and insecurity,” the Jesuits said in a statement. “Our faith calls us to see them, to understand their situations and to offer protection.”

The religious order said it agrees with its partner agency, the Kino Border Initiative, which accompanies migrants and their families who are denied access to due process and protection, that the president’s actions would make them more vulnerable as they seek safety in the U.S.

The Jesuits also agreed with the Kino initiative that the expected rapid increase in border enforcement without sufficient training and accountability for the U.S. Border Patrol agents could harm migrating people.

Also joining the outcry was the chairman of the board of directors of Catholic Legal Immigration Network, Bishop Kevin W. Vann of Orange, California, who said the actions “greatly challenge and weaken the United States’ history and core value of offering refuge to the persecuted.”

“As Catholics, we believe that immigration is sometimes necessary for people to care for their families and preserve human dignity,” Bishop Vann said in a statement released by the agency. “A just society protects these immigrants, our brothers and sisters.

“Too many of these executive orders veer far from our national ideals, presuming guilt over innocence and risk depriving desperate people of due process rights and human dignity,” he said.