Event inspires Catholic collegians to evangelize on their campuses 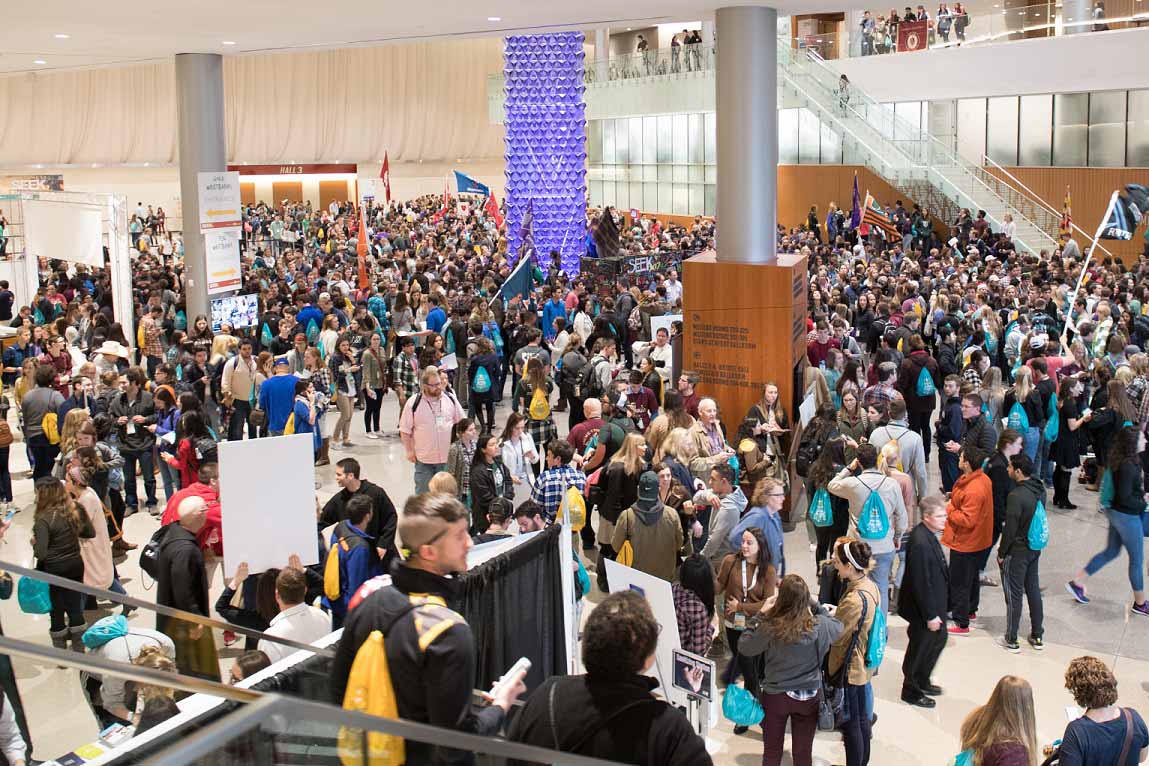 SAN ANTONIO (CNS) — In need of reigniting the fire for his Catholic faith, Jeremy Martins found the flame he needed during SEEK 2017.

“SEEK is the log I was waiting for,” said Martins, a junior at Benedictine College in Atchison, Kansas. “It has been two years since a real encounter with Christ.”

He told Catholic News Service that the conference, sponsored Jan. 3-7 by the Fellowship of Catholic University Students, known as FOCUS, generated a new excitement even though he previously had committed two years of his life to mission work that involved evangelizing young people and help them overcome “the poverty of spirit” in their lives.

Martins was not alone. About 13,000 people, almost exclusively young adults, attended the biennial SEEK conference at San Antonio’s Henry B. Gonzalez Convention Center. The five-day event focused on the theme “What Moves You.”

“I know that if they are from my university and attended SEEK, we can now bring this experience that we have had together back to campus with us. We can talk about it and show what we learned on our university campus,” Martins told Catholic News Service. 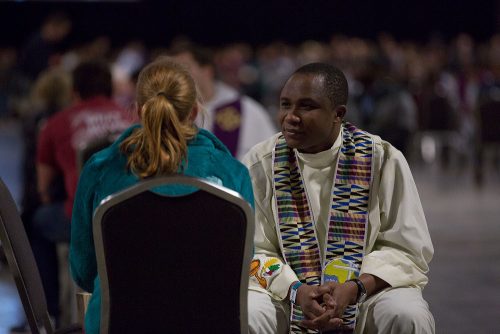 Archbishop Charles Chaput also spoke at the conference — read his column adapted from his talk on CatholicPhilly.com, here.

Father Schmitz reminded his listeners to “not be conformed by this age. But be transformed by the renewal of your mind. Our call is to live like Jesus.”

Austin Palen, a junior at Kansas State University, came away with “pages and pages of notes” from the talk.

Kylee Mernagh, a freshman at the school, also appreciated how Father Schmitz urged participants to “strap our boots on” in order to live their faith in the world. She attended the conference with several of her sorority sisters from Pi Beta Phi.

“It was helpful knowing we’d see these people at everyday events,” she said afterward. “Knowing when it seems that everyone is thinking differently, you’re not the only person with morality. You know others have similar values.” 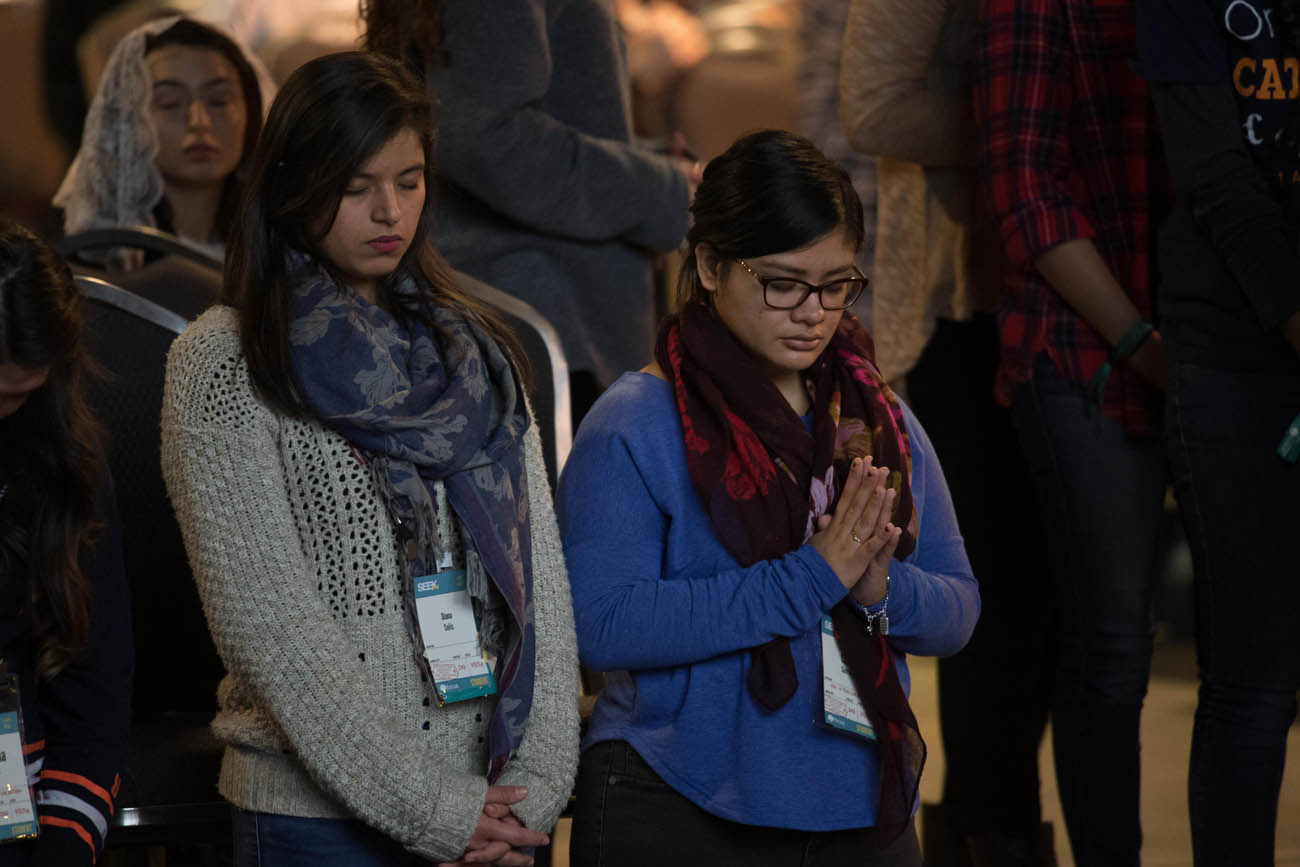 Mernagh said her sorority sister brainstormed about encouraging Catholic members from other fraternities and sororities to not be afraid of living their faith. “If each house took one hour of adoration, how cool would it be?” she said.

It’s such reactions that conference organizers hoped would resonate in the future among the college-age participants.

Craig Miller, FOCUS president, told CNS that he hoped that the most important thing participants take from the conference is “the knowledge that Jesus Christ loves them and that they all have a father who loves them and will be with them through everything.”

“Knowing what you are made for gives you purpose and knowing that you are born as son or daughter of God brings you in relationship with your creator,” he said.

As a team director for FOCUS at Ave Maria University, Nick Smith described FOCUS as important to university campuses because the organization “counteracts the things that distract us in a way that really allows Jesus to enter into this culture of death and change it.” 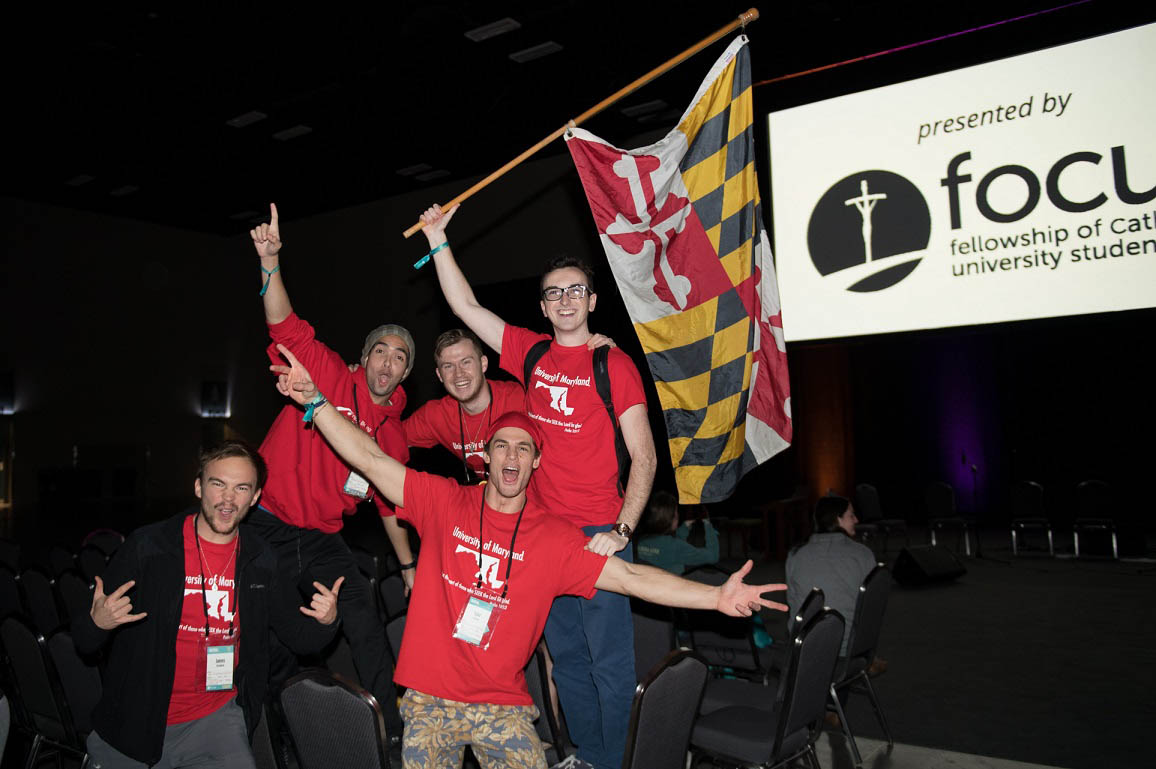 Martins said he was struck by Sri’s comments about the importance of people changing their actions to reflect their beliefs in an effort to overcome relativism in the world.

“This stuck with me because I realized that although I was surrounded by Catholics in Benedictine College, I found myself going to Mass less and less,” he explained. “I now realize I was changing my actions and justifying them by other Catholic’s actions. This conference has helped me realize that I really need to act the faith taking it upon myself to change, so my actions reflect my beliefs.”

In another presentation, John H. Carmichael, author of “Drunks and Monks,” discussed the freedom of drunkenness and worldliness. “If you build your house on sand, it will wash away,” he said. “Young people, you should build it on rock. Go deep into the heart of the Catholic Church.”

With such encouragement, SEEK participants could head back to their homes or colleges with what Miller described as a strong relationship with God so that “this relationship allows us to live life at its fullest.” 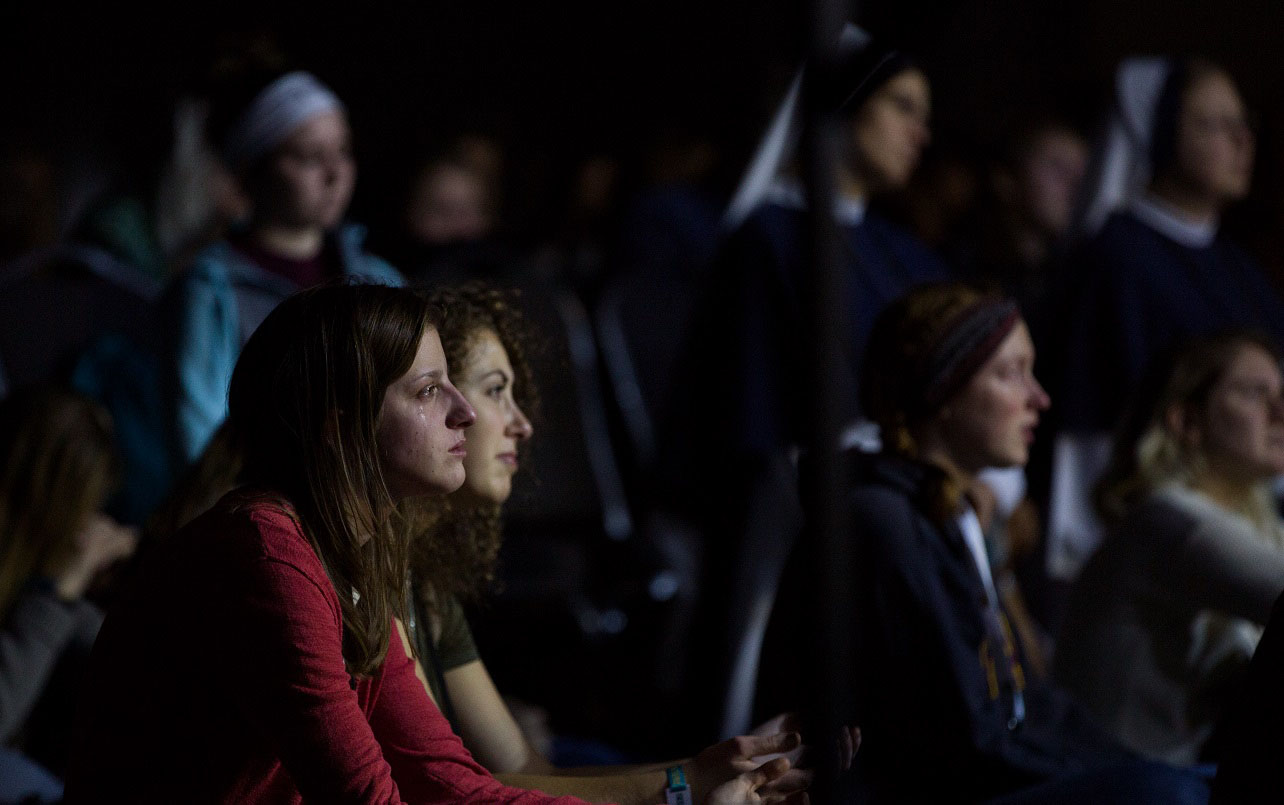 Among those in attendance were more than 200 college students from the Diocese of Salina, Kansas. Among them was Adam Urban, a senior at Fort Hays State University in Kansas. He coordinated a bus from the school.

“(Adoration and reconciliation) were very well done,” he said. “They have great music to draw you into prayer and incense — they engage all of the senses. For our group and myself, the adoration experience is really powerful.”

The lines were long for reconciliation the evening of Jan. 5 as thousands of students took advantage of the opportunity to grow a bit closer to God. The experience impressed Tracie Thibault, a junior from Kansas State University.

“I think the moment I knew it was worth all the planning and fundraising was seeing more than 12,000 people on their knees at adoration,” said Thibault, who helped coordinate the school’s three charter buses. “Sitting in the back watching student after student go to confession, seeing 200-plus priests and knowing God’s mercy was present, that’s when I knew it was all worth it.”

Contributing to this story was Karen Bonar, editor of The Register, newspaper of the Diocese of Salina, Kansas. 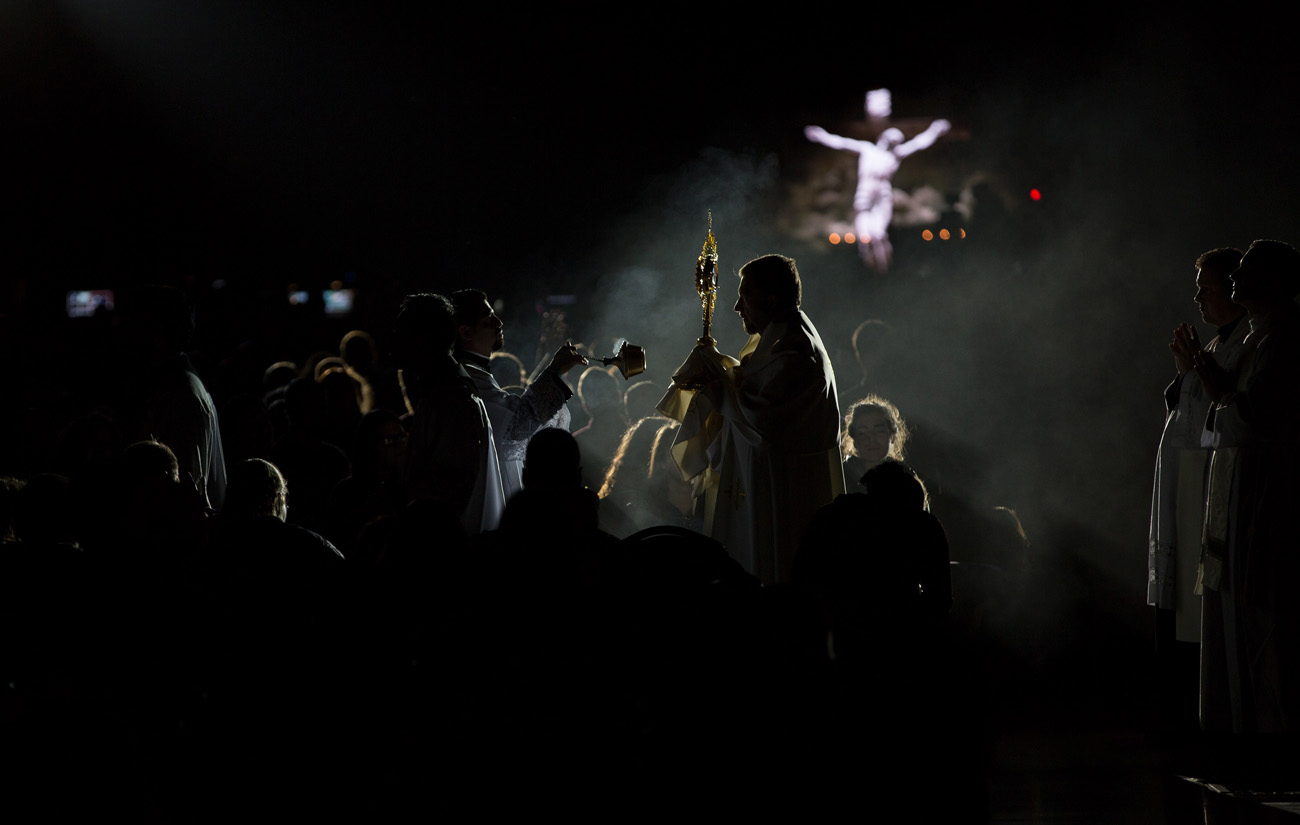