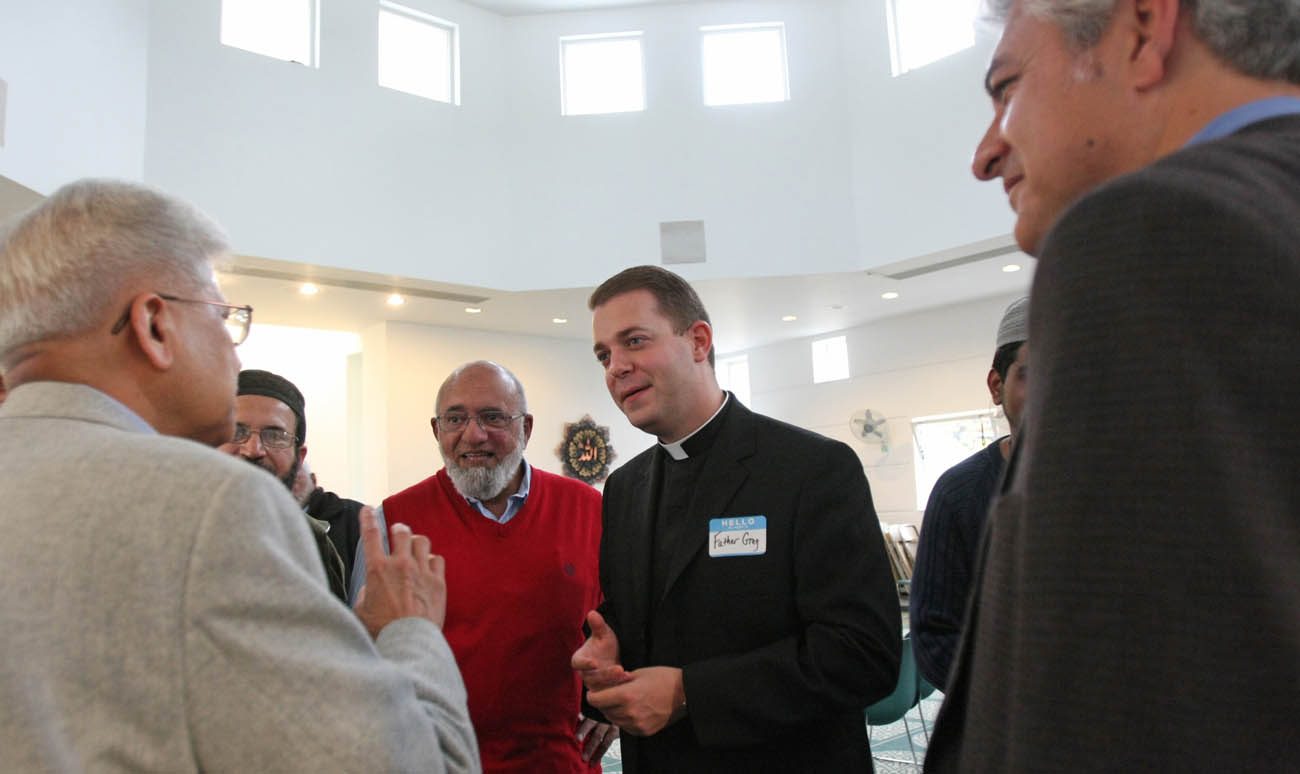 Father Gregory Rannazzisi chats with Muslim men during an open house in 2010 at the Islamic Center of Long Island in Westbury, N.Y. Father Rannazissi, a member of the ecumenical and interfaith commission of the Diocese of Rockville Centre, N.Y., is the diocese's liaison with Long Island's Muslim population. (CNS photo/Gregory A. Shemitz)

The dialogue stems from concerns expressed by U.S. bishops in the wake of “a serious uptick in violence against American Muslims … to make sure that they are sensitive to what is going on in the (Muslim) communities,” said Anthony Cirelli, associate director of the Secretariat for Ecumenical and Interreligious Affairs at the U.S. Conference of Catholic Bishops.

The dialogue, underway since last February, will build on three already existing regional Catholic-Muslim dialogues, also overseen by the secretariat. Those gatherings have involved Muslim and Christian scholars and religious leaders and have focused largely on academic discussions and comparisons of their respective religious texts, Cirelli said.

The regional dialogues — mid-Atlantic, Midwest and West Coast — have been effective in creating a better understanding among Muslim and Catholic leaders on a theological level, Cirelli explained. The national dialogue also will help Muslim leaders to better advocate for current concerns, “especially with the incoming (U.S.) administration,” said Cirelli, referring to calls by President-elect Donald J. Trump and others to monitor American Muslims and limit entry of Muslim visitors from abroad.

“While our meetings will still have as a central component the all-important theological conversation, right now there is an urgency to engage more in a kind of advocacy and policy in support of the Muslim community,” Cirelli told Catholic News Service.

Cirelli cited statistics documenting a higher number of anti-Muslim activities nationwide as well as a recent study by The Bridge Initiative, a Georgetown University research project on Islamophobia, showing that Catholics who regularly obtained information from Catholic media were more likely to unfavorably view Muslims than those who did not.

“The bishops’ priority at the moment is to listen to (Muslims’) concerns, their fears, their needs … and so discern how we as Catholics can help them achieve their goals of full participation in their communities,” Cirelli said.

He said Muslim counterparts to the dialogue were still being identified.

“At this point in our nation’s history, the bishops, are mainly concerned with listening to and, when appropriate, coming to stand with our Muslim colleagues in their own difficult work of addressing the fears of ordinary Americans with respect to Muslims as well as their work in trying to change the negative narrative surrounding Muslims in our popular media,” Cirelli said.

The creation of the dialogue was motivated by the call of “Nostra Aetate,” the Second Vatican Council’s declaration on the relations with non-Christian religions.

“As the national conversation around Islam grows increasingly fraught, coarse and driven by fear and often willful misinformation, the Catholic Church must help to model real dialogue and goodwill,” Bishop Mitchell T. Rozanski of Springfield, Massachusetts, chairman of the bishops’ Committee on Ecumenical and Interreligious Affairs, said at the time the dialogue started in February.

Cardinal Blase J. Cupich of Chicago was designated as the dialogue’s Catholic chairman and assumed the position Jan. 1, Cirelli said.

Beyond building relationships, the national dialogue will “strive to contribute tangible fruits … that benefit not only those who pray and worship in our churches and mosques but also the American public and the international community of Christians and Muslims as each tries to replace narratives of hate and distrust with love and affection,” Cardinal Cupich said.

During the widely publicized event at the University of San Diego’s Joan B. Kroc Institute for Peace and Justice, Bishop McElroy challenged U.S. Catholics to take an active role in combating “the scourge of anti-Islamic prejudice.”

The next dialogue is set for March 7-9 in Chicago. On March 8, Bishop McElroy will discuss the common good tradition in the Catholic Church. An Islamic scholar, who has yet to be named, will address the Islamic understanding of hospitality in the Quran.

NEXT: Event inspires Catholic collegians to evangelize on their campuses