Pro-life groups march with women in capital, even after snub 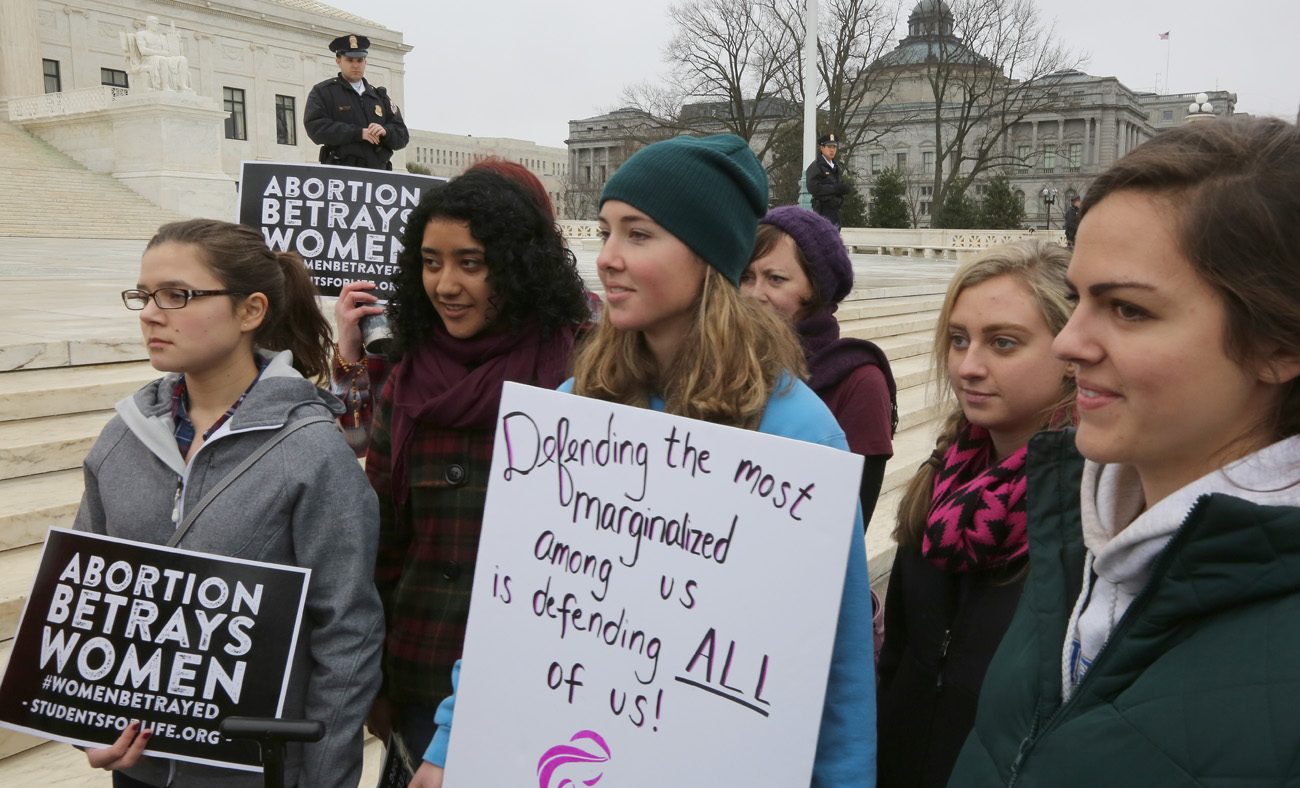 Mary Solitario, 21, center, a Catholic from Virginia, joins a pro-life demonstration outside the U.S. Supreme Court prior to the Women's March on Washington Jan. 21. (CNS photo/Bob Roller)

UPDATED – WASHINGTON (CNS) — After being removed from a list of partner organizations for the Women’s March on Washington, members of a pro-life group based in Texas decided they still would take to the streets Jan. 21 to take part in the historic and massive event. And they said it was a good decision.

“Overall, it was an amazing experience,” said Destiny Herndon-De La Rosa, of New Wave Feminists, one of the groups removed as a march sponsor.

“We were prepared for confrontation and instead were supported by so many women,” said Herndon-De La Rosa told Catholic News Service.

The group posted photos on their Facebook and Instagram accounts of their participation, holding signs that read, “I’m a pro-life feminist.”

“They kept coming up and telling us how glad they were that we were there and how, even though they didn’t necessarily agree on the abortion issue, they thought it wrong that we were removed as partners,” said Herndon-De La Rosa. “It was very cool.”

Women like Herndon-De La Rosa marched for a cause. In her group’s case, they are concerned about President Donald J. Trump’s changing position on abortion and say they wanted him to know they’d be watching what he does on pro-life issues such as abortion, the death penalty and violence.

Others marched to voice disapproval of the new president. Many came from places near and far and after filing past the streets near Washington’s most important institutions, they filled the area near the White House where its newest residents have a direct line of view toward the Washington Monument.

They were hoping the newly minted president would hear or see them and consider what they had to say.

Margie Legowski, a parishioner at Washington’s Holy Trinity Catholic Church, said she took to the streets “in support of values that I don’t see in this administration.” Those values include equality for women and also caring about immigrants who need help.

“I want to take a stand. I don’t want to be passive about it,” she said. “In our faith we’re called to solidarity.”

That means standing up against wealth inequality and defending the vulnerable, she said. It’s a means of building the kingdom of God on earth and she doesn’t see that as a priority for the new president.

Like a lot of women attending the march, she hosted other female friends, nieces and a sister-in-law who lives in Germany, all of whom felt enough conviction to travel to Washington and lend their presence to the numbers of participants.

Jean Johnson, another Holy Trinity parishioner, attended the march with 11 nieces and four grandnieces. They arrived in Washington from around the country, some driving long distances and picking up other family members along the way. She said she felt pride in her large group, particularly because they adopted the values of her Irish Catholic immigrant parents and are concerned about the common good, for women and for others.

She wasn’t marching against a cause or person, but rather marching for women’s dignity, she said.

“I went to a Catholic school where the nuns told me I’m a temple,” she told CNS. “The march is for that dignity.”

And she was excited to share that moment with a new generation in her family, she said.

Some women who attended said they didn’t feel president Trump valued that dignity, particularly after a leaked recording was aired during the campaign in which he was heard making lewd comments about women to an entertainment reporter.

Jack Hogan, who once worked for the Catholic Campaign for Human Development, the U.S. bishops’ domestic anti-poverty program, said he was attending the march with neighbors and friends because he feels that what Trump has said goes against Catholic social teaching. He said he was hoping other Catholics, as organizations and groups, as well as church leaders, would speak up more forcefully for the poor and vulnerable at this time.

He said worries about the new president’s stance on climate change, on the poor and other issues that seem to go against what Pope Francis, as the leader of the Catholic Church, says are important. He said he feels Trump lives and espouses the opposite of what the church values, including family.

As a citizen, “what (Trump) stands for is not what our participatory democracy stands for,” Hogan said, adding that he could not celebrate his inauguration. Ever since Trump was elected, Hogan said he has participated in various protests and prayer events with other organizations because he worries about what will happen to the vulnerable in society. The Women’s March was one of those instances, he said.

Jim Switzer, a member of Pope John XXIII Parish in Liverpool, New York, patiently made his way through the jammed L’Enfant Plaza Metro station carrying a U.S. flag folded close into the traditional shape of a tri-cornered hat close to his chest.

“A lot of people died for this flag and now we want to continue to work under this flag,” said Switzer, also a member of Carpenters Local 277 in Syracuse, New York. “I’m here to support the march because it encompasses everything we stand for.”

Sister Kathleen Desautels, 78, who came to Washington from Chicago, said the march was the about the “intersection of all the issues — human rights, anti-racism, sexism, women and church and society issues, economic issues, poverty, climate change” — and the need to “look at the systems” that create injustice.

“This was a perfect response occasion to support and be a part of it and in one sense one way to resist the new administration,” she told CNS. Sister Desautels is a justice promoter for her order, the Sisters of Providence of St. Mary of the Woods, and on the staff of the 8th Day Center for Justice.

Billie Murray, an associate professor in communication at Villanova University, said she was inspired by the crowd size and the diversity of viewpoints. “I hope this is a way for people to build community and when people wake up tomorrow (the day after the march) they feel energized about a mass movement of people that want things to be progressive and will use that energy to work for justice.”

“The march was peaceful, beautiful, diverse. The only negative is that we couldn’t get around to see the stage,” added Maria Scharfenberger, from the Archdiocese of Louisville, Kentucky. “Thousands of us stood — and stood together, even though we couldn’t see or hear what was going on. We still were present as a sign of hope.”

She told CNS she wanted to show “solidarity with the most vulnerable.” Through her work in Hispanic ministry at a parish, St. Bartholomew Parish and as a member of the local Catholic Worker community called the Casa Latina CW, Scharfenberger said, she is aware of how many people feel vulnerable with Trump as president.

“Kids are afraid their parents will be deported. And I am talking about folks with and without papers,” she explained. “I wanted to stand up for the human treatment of all. Respect, dignity, compassion. … The message I keep hearing and coming back to is that diverse voices and causes must unite.”

While organizers said the event was to “promote women’s equality and defend other marginalized groups,” some pro-life groups that wanted to be partners in the march were either removed as official sponsors days before the march — or their application to be a sponsor was ignored.

In an interview before the march, Herndon-De La Rosa told CNS no one contacted her group to give them the news they were taken off a roster of sponsors, but they found out after a flurry of stories about it. The groups And Then There Were None and Students for Life of America also were denied or taken off the Women’s March roster.

However, many members of those organizations attended the march. 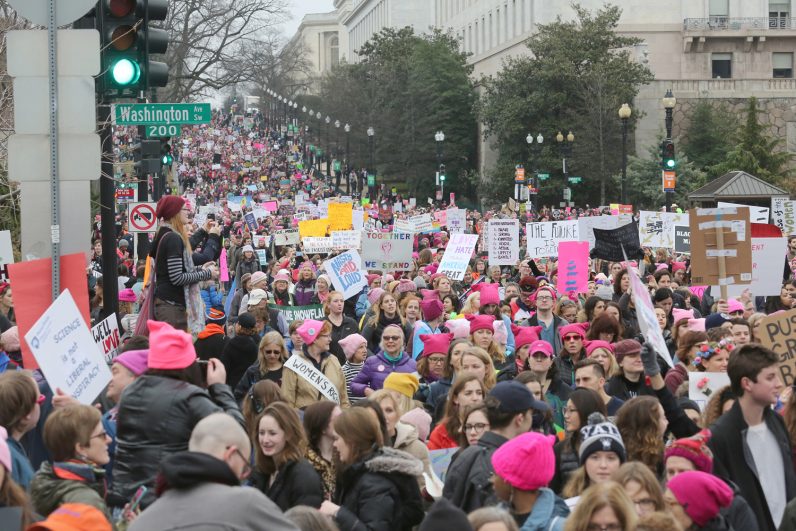 NEXT: Catholic schools plant seeds for vocations by example