After a shooting, Catholic group reminds people about feast’s solemnity 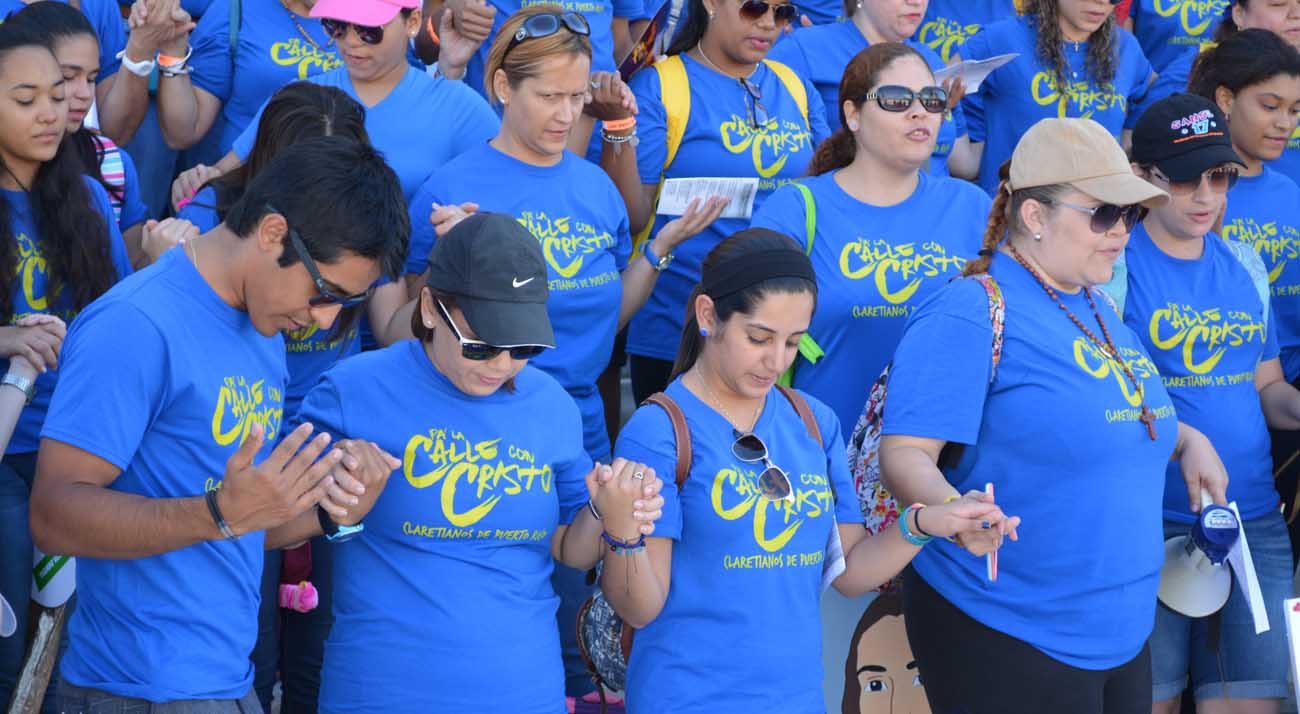 Members of the Claretian Youth group from the Archdiocese of San Juan, Puerto Rico, pray before entering St. Sebastian Street Feast hours after a shooting at the four-day event in Old San Juan Jan. 21. In the late hours of Jan. 20, the feast day of St. Sebastian, a fight broke out within the crowd, leading to shots fired resulting in two wounded men, but no fatalities. (CNS photo/Wallice J. de la Vega)

SAN JUAN, Puerto Rico (CNS) — Within hours after a shooting at an event that originated as a religious feast, a brigade of about 125 young Catholic evangelizers launched a “To the Streets With Christ” campaign Jan. 21, making their presence heard throughout the packed streets of Old San Juan.

Jovenes Claretianos’ (Claretian Youth) message was a lively reminder that the annual St. Sebastian Street’s Feast is at its core a religious observance.

“Claretian Youth has resolved to make a happy, joyful presence at this St. Sebastian Street Feast with concern and hope to highlight the celebration’s origin: to honor St. Sebastian martyr,” said Father Hector Cuadrado, a member of Claretian Missionaries of Puerto Rico, pastor of St. Joseph Parish in Bayamon.

Celebrated in San Juan the weekend closest to Jan. 20, the Mardi Gras-like event originated in 1954 as a fund-raising effort led by Father Juan Manuel Madrazo, then pastor of nearby St. Joseph Church. After a long suspension, the celebration was revived in 1970 to benefit a Catholic preschool for poor children run by the Daughters of Charity of St. Vincent de Paul until 2009.

Over the years, the feast has become larger but less religious. According to local authorities, last year’s event set an all-time attendance record of 700,000 party-goers.

Late night Jan. 20, the feast day of St. Sebastian, a fight broke out within the crowd, leading to fired shots resulting in two wounded men, but no fatalities.

“We have taken the initiative to evangelize and show people what we Claretian Catholics celebrate, which is a saint’s feast,” said Aisha Machuca Roman, a Claretian Youth member from St. Joseph of Magnolia Parish. “This celebration has lost its sense of honoring our saint; we can celebrate merrily, but we must never forget that.”

NEXT: Never underestimate the courage and wisdom of women, pope says