As elections approach in Somalia, bishop sees signs of hope 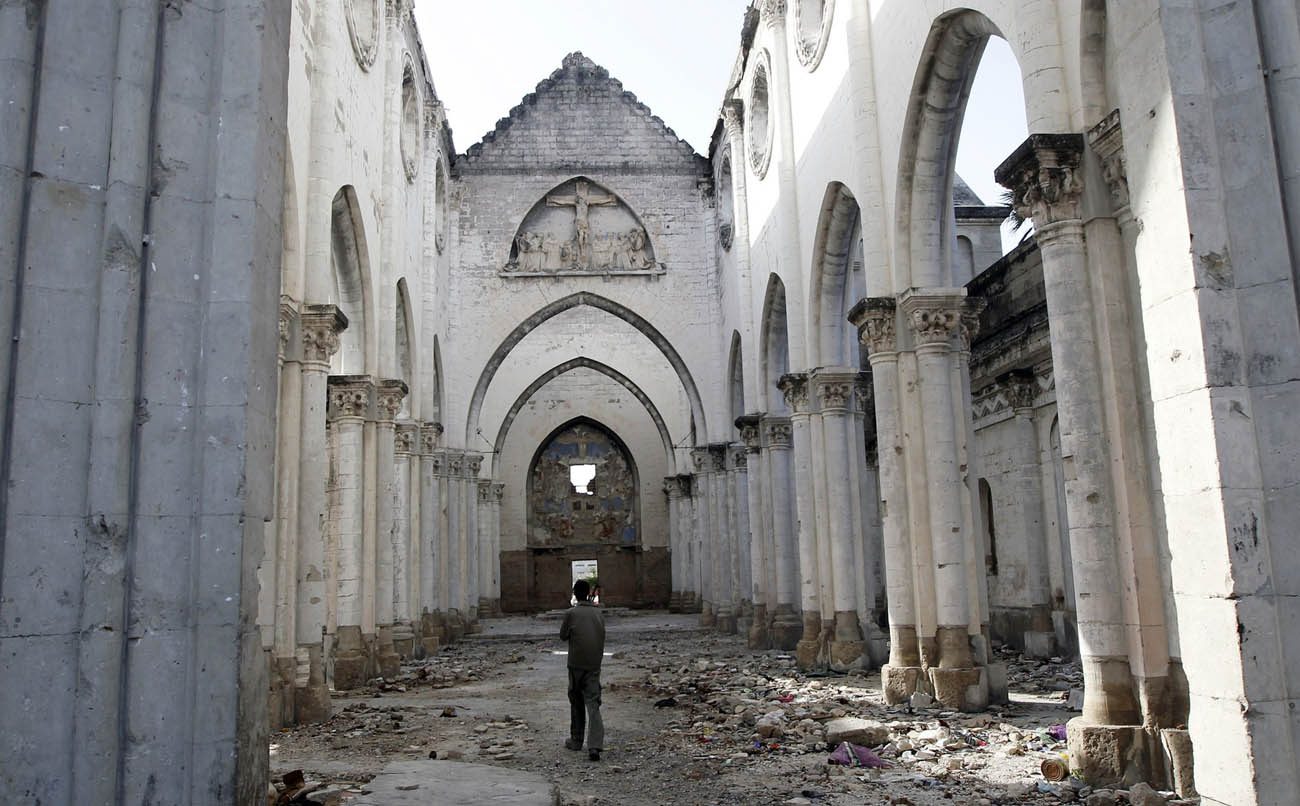 A man is seen in 2012 walking through a Catholic church destroyed during the civil war in Mogadishu, Somalia. (CNS photo/Goran Tomasevic, Reuters)

NAIROBI, Kenya (CNS) — As presidential elections approach in Somalia, the bishop who serves as apostolic administrator sees signs of hope, but he says changes are needed.

Since 1991, the presence of the Catholic Church in Somalia, already small, largely disappeared across the country as parts of Somalia came under the control of a more fundamentalist Islamic authority while other large sections of the country were taken over by al-Shabab, an Islamist militant group.

Bishop Giorgio Bertin, the apostolic administrator of Mogadishu and president of Caritas Somalia, has worked largely below the radar from outside of the country, first in Nairobi and later from Djibouti, where the diocesan offices were eventually relocated.

Despite the years of turmoil and upheaval, he has always remained hopeful. He said one symbol of that hope is the recent rebuilding and re-consecration of the parish church in Hargeisa, Somalia’s second-largest city. The project was supported by the U.S. bishops’ Catholic Relief Services.

What is and is not surprising, depending on how one looks at it, is that the church serves between 10-15 faithful.

“There might be one or two more,” Bishop Bertin said, “but they might be afraid to come to the church.”

“The threat of Islamic extremism is of course always there, but the situation is now relatively safe,” he said in early January.

Bishop Bertin said the 10-15 people who form the small church community are foreigners, working regularly in the semi-autonomous region of Somaliland for the United Nations or other development and humanitarian agencies that have offices in Hargeisa.

“Why have a church for just 15 people?” Bishop Bertin asked. “First, the priest is there for those people. But second, and more importantly, he serves the others too. And for those people, they see and experience the church in its essence: in its presence and in its service, including through the work of its Caritas organizations.”

Through this presence, including through Caritas, Bishop Bertin said the aim is to re-awaken those values that are God-given and that all humanity has, irrespective of faith: the value of work, respect toward people of different faiths, and unconditional love toward others and the poorest of the poor.

He also noted that in areas like Hargeisa, where people have so little and there are so few resources to fuel conflict, there is relative peace compared with the rich agricultural lands around the Lower Shabelle and Juba rivers, which have been largely hijacked by al-Shabab militants in southern Somalia.

In Hargeisa, now with a parish priest and a small Caritas office, Caritas Somalia is working a programs such as repairing local schools and a hospital, food assistance and support for children from among the most marginalized minority clans. Caritas also has projects in Mogadishu.

Bishop Bertin said he remains optimistic for the Jan. 22 elections, which have been rescheduled several times. He said, however, that one of the keys to Somalia’s future peace will be the need for foreign interests and the vested interests inside of Somalia to take a step back and allow Somalis to move forward in their own interest and for their own welfare.

He recounted how, in 1995, when internationals were being evacuated from the ever-deteriorating Somalia, a humanitarian worker who was leaving Mogadishu, like hundreds of others, pulled him aside and asked the bishop to pray for him.

“Father, please pray for me that I’ll be able to find a job as great as this job in Somalia has been,” the man asked Bishop Bertin at one of the last Masses he celebrated in Somalia, around Christmas of that year.

Bishop Bertin said if Somalia remains the way it is, not only would some nongovernmental organizations profit, but so would various Somali clan mafias and international economic interests, such as the security and the arms industry. Those who are currently in power seek to keep that power, he said, so an opening to the outside world is the last thing they would want.

On a recent trip to the United Nations, Bishop Bertin told to a roundtable group that when it comes to Somalia, the outside world tends to view the country through one of two lenses. It’s either a security issue, or an emergency.

“I say we need to bring about the rebirth of state institutions,” Bishop Bertin said. “This must be our main work as the international community because the state was destroyed and, clearly without a state, there will always be a need for the military and for emergency response.”

“The international community needs to make a more serious commitment to Somalia for Somalis,” he said. “It’s a shared responsibility. Because normally all the external parties push their own agenda, saying it’s for the Somali people but really it isn’t.” The result is that different Somali groups then align with whichever foreign interest best suits their particular clan, and it continues to just not work, he said.

“I am of the opinion that 80 percent of the population is being held hostage by all these different interests,” he added.

NEXT: In visit to Kurdistan, U.S. bishop hears priorities of Iraqi Christians