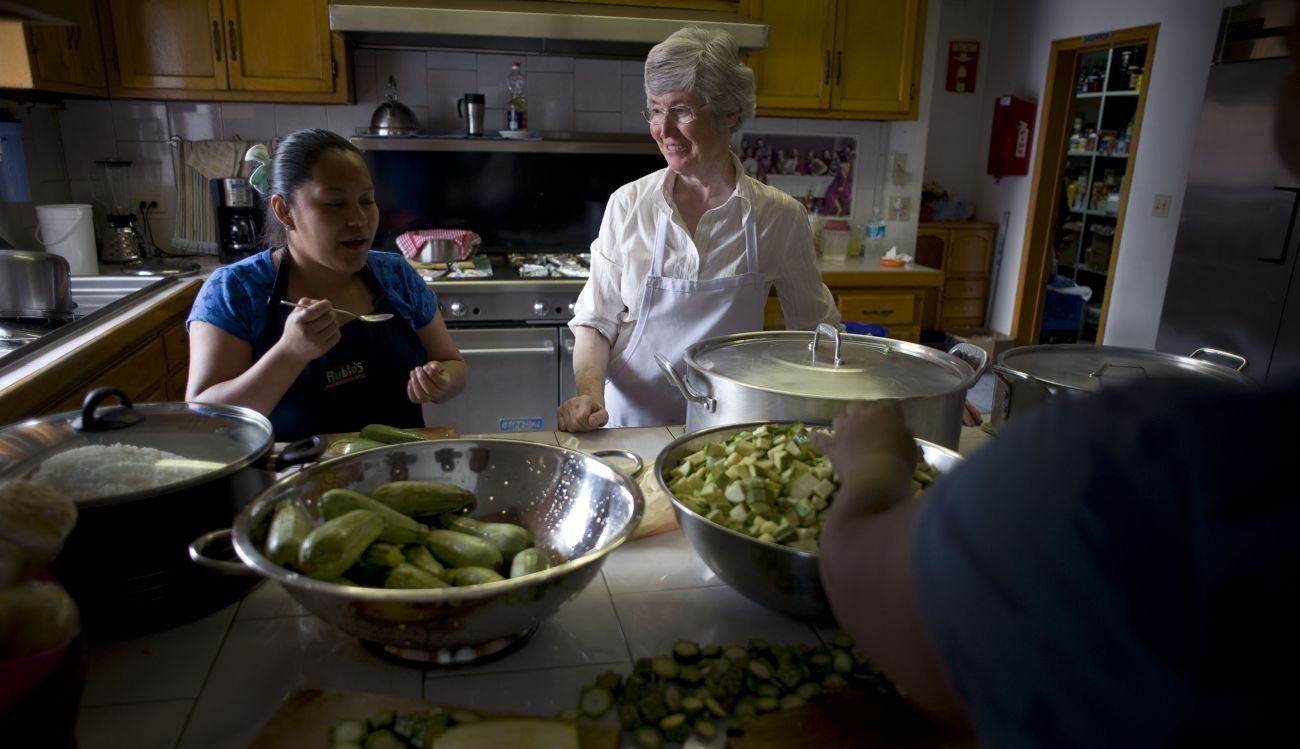 Scalabrinian Sister Adelia Contini, right, with the Instituto Madre Asunta, a shelter for immigrant women and children, watches as a woman does a taste test in 2016 while preparing lunch at the shelter in Tijuana, Mexico. (CNS photo/David Maung)

MEXICO CITY (CNS) — Catholics working with the thousands of migrants transiting Mexico in their attempts to reach the United States said a border barricade will fail to dissuade those desperately fleeing countries in Central America with some of the highest homicide rates on earth.

Sister Leticia Gutierrez, Mexico director of the Scalabrini Mission for Migrants and Refugees, said “the United States will not stop being an attractive place for people” who live in such dangerous conditions. She also criticized the message sent by U.S. President Donald Trump’s executive memorandums, one of which included building a border wall along the nearly 2,000-mile-long frontier with Mexico, parts of which are already fenced.

“The wall announcement is a symbolically strong action in signaling the U.S. posture for the region and the whole world,” said Sister Leticia. “It’s continuing this thinking that comes from a perspective of national security, a vision of nationalism and seeing others as a danger.”

Some in the Mexican church community said the border wall announcement would not change much.

“There’s already a wall here,” said Father Alan Camargo, spokesman for the Diocese of Matamoros, which occupies the northeast corner of the country. “All of the Rio Grande is a wall.”

Many deportees are returned through the border towns served by the diocese. The potential influx from increased enforcement in the United States causes concern among residents. Church workers say such concern is common, because deportees returning to their hometowns often suffer the stigma of not having succeeded in the United States and are seen as competition for scarce jobs. In border cities, they’re viewed suspiciously as strangers and considered targets for drug cartel recruitment.

“We don’t have the space to receive these people,” said Sister Maria Nidelvia-Avila, a Daughter of Charity of St. Vincent de Paul who oversees a shelter in Reynosa, west of Matamoros. “I would imagine the government will take some measures.”

For the Catholics working with migrants, the efficacy of a potential border wall brings doubts. Many say the border is already impossible to cross without some sort of paid assistance, almost always in the form of smugglers, whose business has been co-opted by organized criminal groups such as Los Zetas, the notorious drug cartel.

“Any migrant that arrives at the Mexican-U.S. border will be required to hire the services of organized crime, be it Mexican groups or those in collusion with criminal groups on the U.S. side of the border” or in the border authorities, Sister Leticia said.

“There’s a bottleneck with our migration situation,” she added. “It’s a bottleneck in that our people continue wanting to cross the border, the Central Americans and people from other continents continue arriving and they’re not being allowed to cross. And with the phenomenon of deportations it becomes a challenge to contemplate.”

Large numbers of Central Americans transit Mexico every year, along with an increasing number of nationals from countries like Cuba and Haiti and even as far away as Africa.

Pew Research Center reported apprehension of migrants by U.S. Customs and Border Protection surged by 42 percent in October and November 2016 in comparison to the same period the previous year.

Advocates for migrants worry that the Mexican government will use its willingness to stop those transiting Mexico “as a bargaining chip” in its dealings with the Trump administration.

Mexico implemented an enforcement scheme known as the Southern Border Plan after an outflow of child migrants from Central America in 2014. It has detained and deported increasingly large numbers of nationals from the “northern triangle” countries of Guatemala, Honduras and El Salvador, even as Mexico promises to protect its own citizens without the proper papers living in the United States.

In Central America, one priest said, another outflow started in early January as migrants took note of the changing political situation in “el norte.”

“People are saying, ‘We’re going to cross the border prior to the inauguration of Donald Trump,” said Jesuit Father Ismael Moreno, director of Radio Progreso in Honduras. “This was a temporary situation,” he added, explaining the problems of extortion, the forced recruitment of kids into gangs and high homicide rates had not improved. “It’s not only for economic reasons, but due to violence” that they’re leaving, he said.

Trump’s executive memorandum caused consternation in Mexico, where the population took offense with him calling Mexican migrants “rapists” and attacking the country in his campaign. Still, many had expressed hope the U.S. president was bluffing about building a border wall.

Mexican President Enrique Pena Nieto told the nation Jan. 25 that Mexico would not pay one peso toward the project, though he reiterated Mexican intentions to forge productive relationships with the Trump administration. The Mexican president canceled a Jan. 31 trip to the White House.

PREVIOUS: Pope prays for victims of deadly wildfires in Chile