Christian unity requires learning from each other, pope says 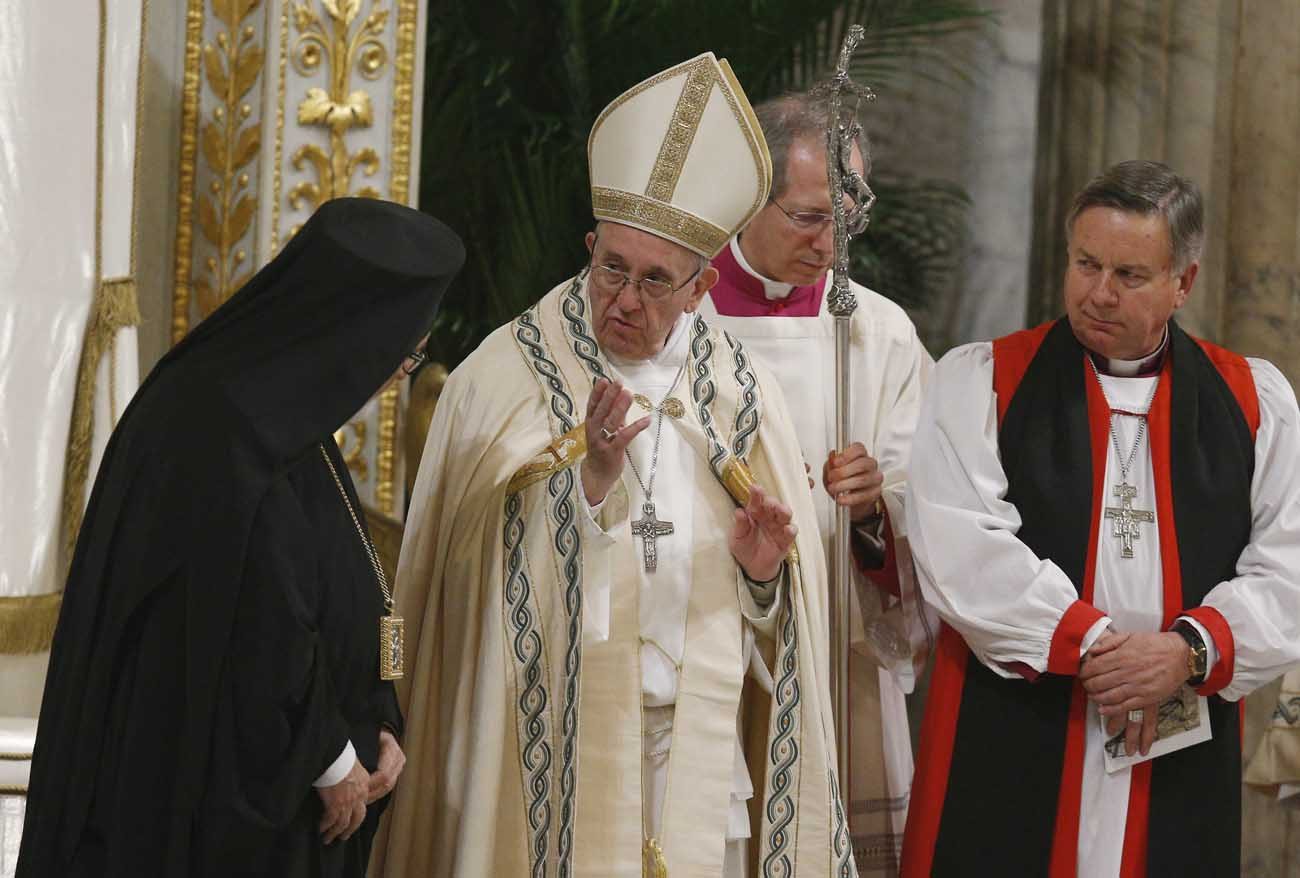 Pope Francis gestures as he stands with Orthodox Archbishop Gennadios of Italy and Malta and Anglican Archbishop David Moxon, the archbishop of Canterbury's representative to the Vatican, during an ecumenical evening prayer service to conclude the Week of Prayer for Christian Unity at the Basilica of St. Paul Outside the Walls in Rome Jan. 25. (CNS photo/Paul Haring)

VATICAN CITY (CNS) — Divided Christians need to recognize the gifts God has given to other communities and learn from them “without waiting for the others to learn first,” Pope Francis said.

Leading an ecumenical evening prayer service Jan. 25 for the close of the Week of Prayer for Christian Unity, Pope Francis said Christians must overcome the “temptations of self-absorption that prevent us from perceiving how the Holy Spirit is at work outside our familiar surroundings,” including in the lives of other Christian communities.

The Vatican’s Sistine Chapel Choir and the Anglican Westminster Abbey Choir sang at the service at Rome’s Basilica of St. Paul Outside the Walls.

At the end of the service, the two took turns with Pope Francis in reading segments of the solemn blessing and in blessing the congregation with the sign of the cross.

In his homily, Pope Francis said St. Paul, who was persecuting the Christians, went from being a person who trusted “his own ability to observe the law strictly” to conversion and “cleaving with his whole being to the gracious and unmerited love of God: to Jesus Christ, crucified and risen.”

Like St. Paul, he said, “each person, forgiven and loved, is called in turn to proclaim the Gospel of reconciliation in word and deed, to live and bear witness to a reconciled life.”

“Authentic reconciliation between Christians will only be achieved when we can acknowledge each other’s gifts and learn from one another, with humility and docility, without waiting for the others to learn first,” he said.

In the year marking the fifth centenary of the Protestant Reformation, Pope Francis said Christians must acknowledge the past but not allow themselves to be fixated on it and on the injuries suffered at the hands of the other.

Christians must allow God, “who makes all things new, to unveil before our eyes a new future, open to the hope that does not disappoint, a future in which divisions can be overcome and believers, renewed in love, will be fully and visibly one,” he said.

Praying for Christian unity, the pope said, is sharing in Jesus’ own prayer for the unity of his disciples.

“With patient and trusting hope that the Father will grant all Christians the gift of full visible communion,” he said, “let us press forward in our journey of reconciliation and dialogue, encouraged by the heroic witness of our many brothers and sisters, past and present, who were one in suffering for the name of Jesus.”

Echoing a call he made during major ecumenical meetings in 2016 with Lutheran and with Anglican leaders, Pope Francis prayed that Christians would “take advantage of every occasion that providence offers us to pray together, to proclaim together and together to love and serve, especially those who are the most poor and neglected in our midst.”

Speaking at the end of the service, Cardinal Kurt Koch, president of the Pontifical Council for Promoting Christian Unity, said, “We must commit ourselves to promoting reconciliation among Christians, and we must let ourselves be compelled by the love of Christ.

“In fact,” he said, “love is the motor of any ecumenical effort. True love does not erase the legitimate differences among Christian churches, but leads them together, reconciled, to a deeper unity.”

NEXT: Church implements Colombian peace accord with reflection, action, prayer