Church must accompany couples before, after marriage, pope says 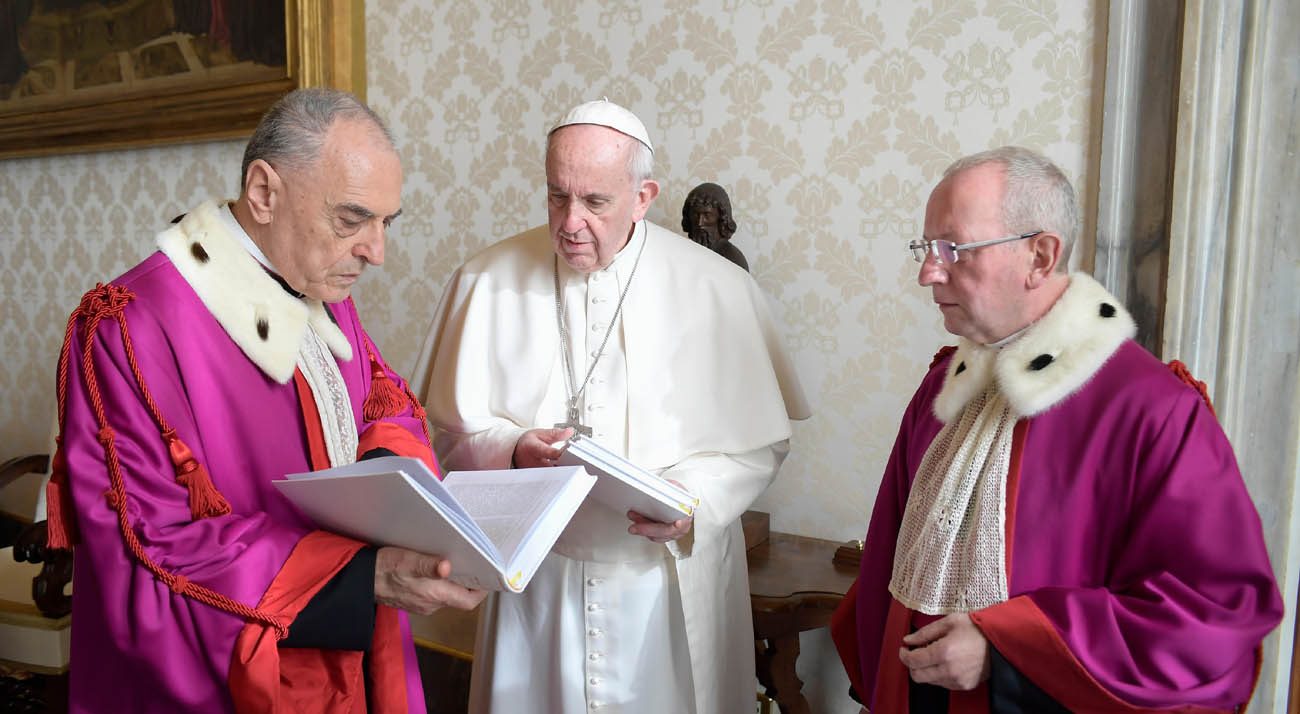 Pope Francis talks with Msgr. Pio Vito Pinto, dean of the Roman Rota, and Father Maurice Monier, pro-dean, during a meeting inaugurating the judicial year of the Roman Rota at the Vatican Jan. 21. The Roman Rota is the highest appellate court in the Catholic Church; it mainly handles marriage cases. (CNS photo L'Osservatore Romano, handout)

VATICAN CITY (CNS) — To ensure engaged couples are entering into a fully Catholic marriage and remain committed to their vows for life, they must be prepared properly beforehand and supported afterward, Pope Francis said.

Addressing members of the Roman Rota, a tribunal handling mostly marriage cases, the pope said the church cannot ignore that there is a “widespread mentality” that is convinced eternal truths do not exist and, therefore, that many young people approaching the church for marriage do not understand what the sacrament is and that it is for life.

“Such a context, lacking religious values and faith, cannot help but condition matrimonial consent,” one of the essential conditions for a Catholic marriage to be valid, the pope told the Rota members Jan. 21.

The response of the Catholic Church, he said, must be to provide serious preparation for engaged couples and support that would help newlyweds mature in their vocation.

“The objective of this preparation consists in helping engaged couples to know and live the reality of the marriage they intend to celebrate so that they may do so not only validly and lawfully, but also fruitfully,” he said.

Citing Pope Benedict XVI’s last address to the Roman Rota — in which he highlighted the relationship between love and truth — the pope said some seeking marriage participate actively in the church while others “are guided by a more generic religious sentiment.”

Educating young people so they rediscover marriage and family life according to God’s plan, he said, is a first “remedy” to situations where sufficient preparation is lacking.

“In this spirit, I would like to reiterate the need of a ‘new catechumenate’ for marriage preparation,” he said.

Pope Francis explained that, just like a catechumenate period in preparation for baptism as an adult, “marriage preparation can become an integral part of the whole sacramental procedure of marriage, as an antidote that impedes the growth of null or inconsistent matrimonial celebrations.”

A second remedy, he continued, is the church’s presence and formation after marriage to encourage newlyweds in their lives together.

The Christian community is “called to welcome, accompany and help young couples” and care for their spiritual life through the parish’s pastoral ministry, he said.

“Often times, young couples are left to themselves, perhaps for the simple fact that they are seen less in the parish; this is especially true after the birth of children,” the pope said.

It is in those “first moments of family life,” he said, that the church must be even closer to young couples so they “may strive for the beauty of the Christian family, despite the destructive traps of a culture dominated by the ephemeral and the provisional.”

“As I have said several times,” the pope said, “great courage is needed to be married in the times in which we are living. And those who have the strength and the joy of fulfilling this important step must feel the love and concrete closeness of the church near them.”

Prior to their meeting with Pope Francis, the members of the Roman Rota celebrated Mass with Archbishop Angelo Becciu, a top official in the Vatican Secretariat of State, to inaugurate the Vatican court’s judicial year.

In his homily, Archbishop Becciu said that like Jesus, the court officials are surrounded by real people who want to be listened to and who have had an “experience of failure, of pain.”

“The ministry you fulfill in the pope’s tribunal puts you daily in contact not just with letters, but with people marked by human and marital failure; they are awaiting answers of truth and justice by the church,” the archbishop said.

PREVIOUS: ‘We must wait and see,’ pope says of President Trump