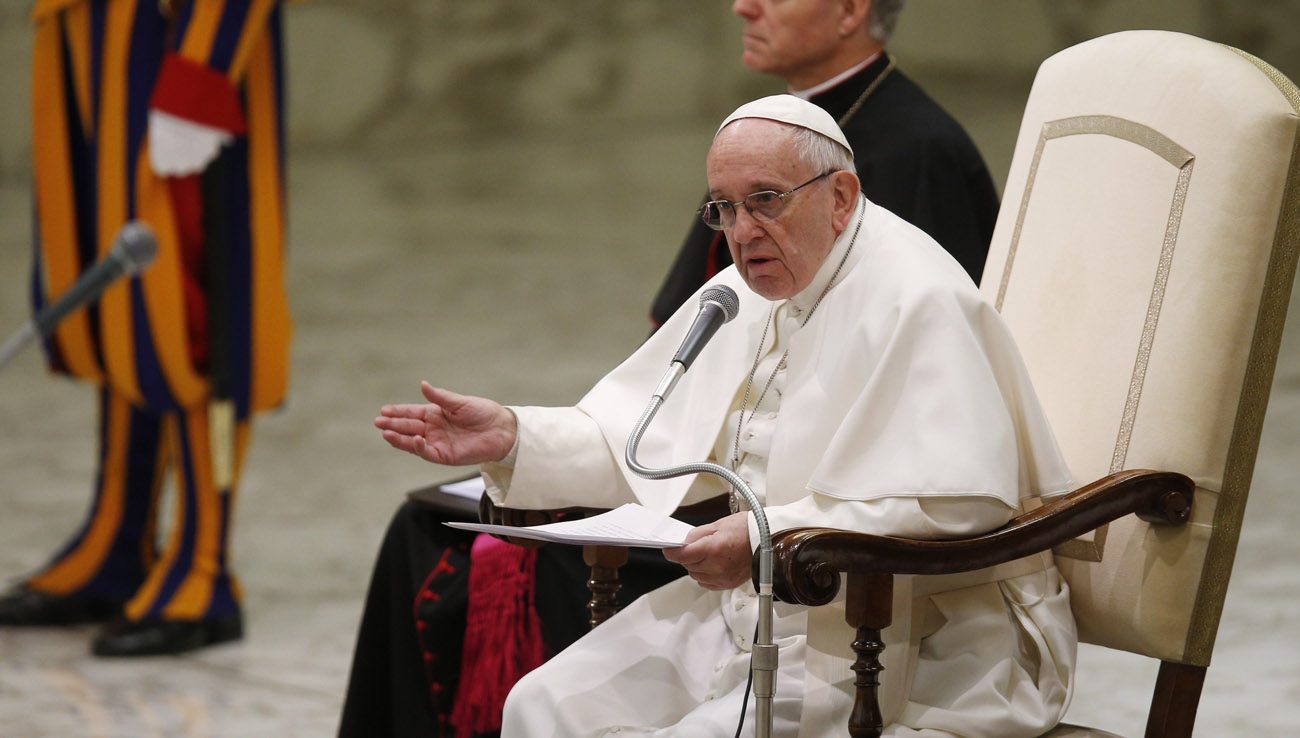 Pope Francis speaks during his general audience in Paul VI hall at the Vatican in this Jan. 11, 2017, file photo. (CNS photo/Paul Haring)

VATICAN CITY (CNS) — While there is a need to evangelize a culture that tells young people money equals success and commitments aren’t forever, stopping the “hemorrhage” of people leaving religious orders also requires changes from the orders themselves, Pope Francis said.

“Alongside much holiness — there is much holiness in consecrated life — there also are situations of counter-witness that make fidelity difficult,” the pope said Jan. 28 during a meeting with members of the Congregation for Institutes of Consecrated Life and Societies of Apostolic Life and representatives of religious orders.

The congregation was holding a plenary meeting focused on “fidelity and abandonment,” examining the factors that contribute to a lifelong commitment to religious vows or to leaving consecrated life.

Pope Francis, himself a Jesuit, said that in some cases it becomes clear over time that a person never truly had a vocation to religious life and it is right for that person to follow God’s call elsewhere. But many other factors can influence a decision to leave, he said, including situations within an order or community.

“Such situations are, among others: routine, tiredness, the burden of running institutions, internal divisions, the search for power — ‘climbers’ — a worldly way of governing the institute, a service of authority that sometimes becomes either authoritarianism or a ‘live and let live'” attitude.

Pope Francis told the group that obviously it is more difficult for young people to make a lifelong commitment to a vocation when they are living in a culture where everything is provisional or temporary, where people are encouraged to pursue their dreams but leave a “door open” in case it does not work out and where “self-realization” is measured by money and power, not by fidelity to the Gospel and Gospel values.

Still, he said, the world of young people is “rich and challenging — not negative, but complex.”

But the young also include “many victims of the logic of worldliness, which can be summarized this way: searching for success at any cost, for easy money and easy pleasure,” Pope Francis said.

The response of the church must be to reach out and “to infect them with the joy of the Gospel and of belonging to Christ.”

The only way to attract young people to religious life and to help members stay, he said, is to “show the beauty of following Christ and radiate hope and joy.”

“When hope diminishes and there is no joy,” he said, “it’s an ugly thing.”

The community life of religious orders is essential, he said, and it must be nourished with community prayer, celebration of the Mass, reception of the sacrament of reconciliation, sincere dialogue among members, “fraternal correction, mercy toward the brother or sister who sins,” and shared responsibility.

Perseverance in religious life, as with any vocation, requires the encouragement and support of others, the pope said, “because when a brother or sister does not find support within the community, he or she will seek it elsewhere.”

“Many times great infidelities begin with little deviations or distractions,” he said. “In this case, it is important to make St. Paul’s exhortation our own: ‘Awake, o sleeper!'”

If a vocation is a “treasure,” Pope Francis said, then it must be handled with care, cultivated with prayer and strengthened with “a good theological and spiritual formation that defends it from the culture of the ephemeral and allows it to progress solid in the faith.”

Religious orders must make a commitment to training at least some of their members in the art of “accompaniment” and spiritual direction, he said.

“We can never insist enough on this need,” he said. “It is difficult to remain faithful walking alone or walking with the guidance of brothers and sisters who are not capable of attentive and patient listening or who have not had adequate experience in religious life.”

“All of us who are consecrated, whether young or not so young, need help appropriate to the human, spiritual and vocational moment we are living,” he said.

A spiritual director or guide “must not create dependency,” control or treat the other as a child, he said, but must help the person “discover the will of God and seek in everything to do that which is most pleasing to the Lord.”

NEXT: Pope encourages Knights of Malta to continue path of renewal