Pope encourages Knights of Malta to continue path of renewal 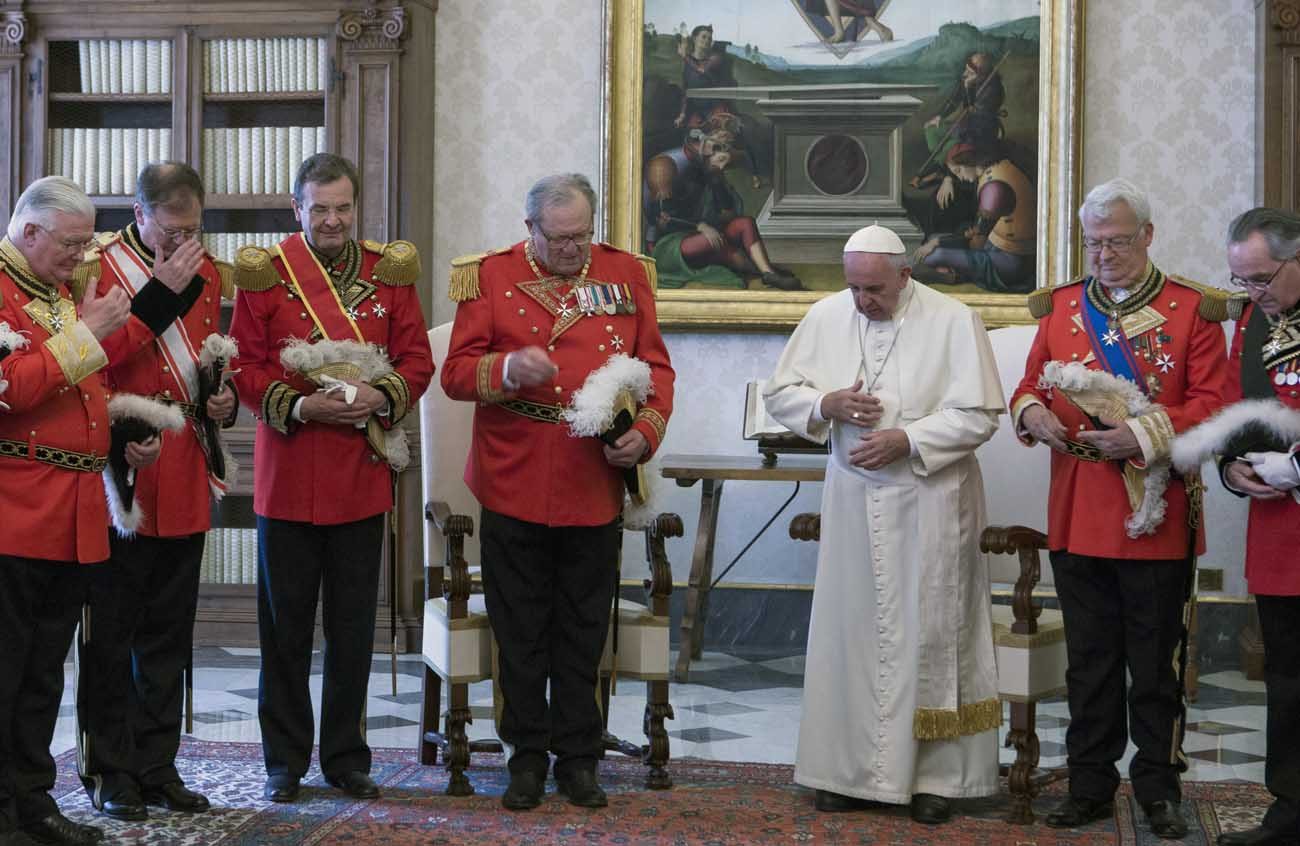 Pope Francis prays with Fra Matthew Festing, (fourth from left), grand master of the Sovereign Military Order of Malta, and Albrecht Freiherr von Boeselager (third from left), then-grand chancellor of the order, during a private audience with members of the order at the Vatican in this June 23, 2016, file photo. Pope Francis has established a commission to look into the dismissal of the order's grand chancellor, von Boeselager; Fra Festing said the commission members are unfit to address the situation objectively. (CNS photo/Maria Grazia Picciarella, pool)

VATICAN CITY (CNS) — As the Sovereign Military Order of Malta accepted Pope Francis’ intervention in their governance, the pope urged members to follow a path of renewal as they prepare to elect a new grand master.

In accordance with the pope’s wishes, the governing council of the order accepted the resignation Jan. 28 of Fra Matthew Festing as grand master and appointed Fra Ludwig Hoffmann von Rumerstein to temporarily lead the chivalric order.

By “putting aside personal interests and dangerous ambitions,” members, volunteers and benefactors of the order can better dedicate themselves to the “noble and proven mission” of defending the faith and serving the poor, the pope wrote in a Jan. 27 letter to von Rumerstein, lieutenant ad interim of the order.

“The witness of an authentic Christian life makes accompanying the sick more accepted and effective, and charity toward the poor and vulnerable people of society more fraternal,” the pope wrote.

Festing offered his resignation Jan. 24 at the behest of Pope Francis, who had established a commission to investigate his removal of the order’s grand chancellor, Albrecht Freiherr von Boeselager.

Festing refused to cooperate with the investigation and insisted the firing was a sovereign act outside the Vatican’s jurisdiction, although the knights take a vow of obedience to the pope.

Pope Francis said he would appoint a special delegate who — in close collaboration with von Rumerstein — will “specifically take care of the spiritual and moral renewal of the order,” especially the 50 or so members who have taken religious vows of poverty, chastity and obedience.

“The special delegate will have the task of being my exclusive spokesman during the period of your mandate for all that relates to the relationship of the order with the Holy See,” the pope wrote.

The pope’s letter did not clarify how the special delegate’s responsibilities would intersect with those of the current cardinal patron of the order, Cardinal Raymond L. Burke.

According the order’s constitution, the cardinal patron “has the task of promoting the spiritual interests of the order and its members and relations between the Holy See and the order.”

Following the acceptance of Festing’s resignation, von Rumerstein expressed his gratitude to him for “the many good things he has done for our order.”

“We are grateful to Fra Matthew in his generous response to the request of the Holy Father to resign his position for the good of the Order of Malta,” he said.

He also thanked the pope and Cardinal Pietro Parolin, Vatican secretary of state, for “their interest in and care for our order.”

“We are grateful to the Holy Father for all his decisions so carefully taken with regard to and respect for the order, with a determination to strengthen our sovereignty. In this and all matters, we will not yield in our loyalty to the pope,” von Rumerstein wrote.