Guard the faith and make it grow, pope tells parents at baptism 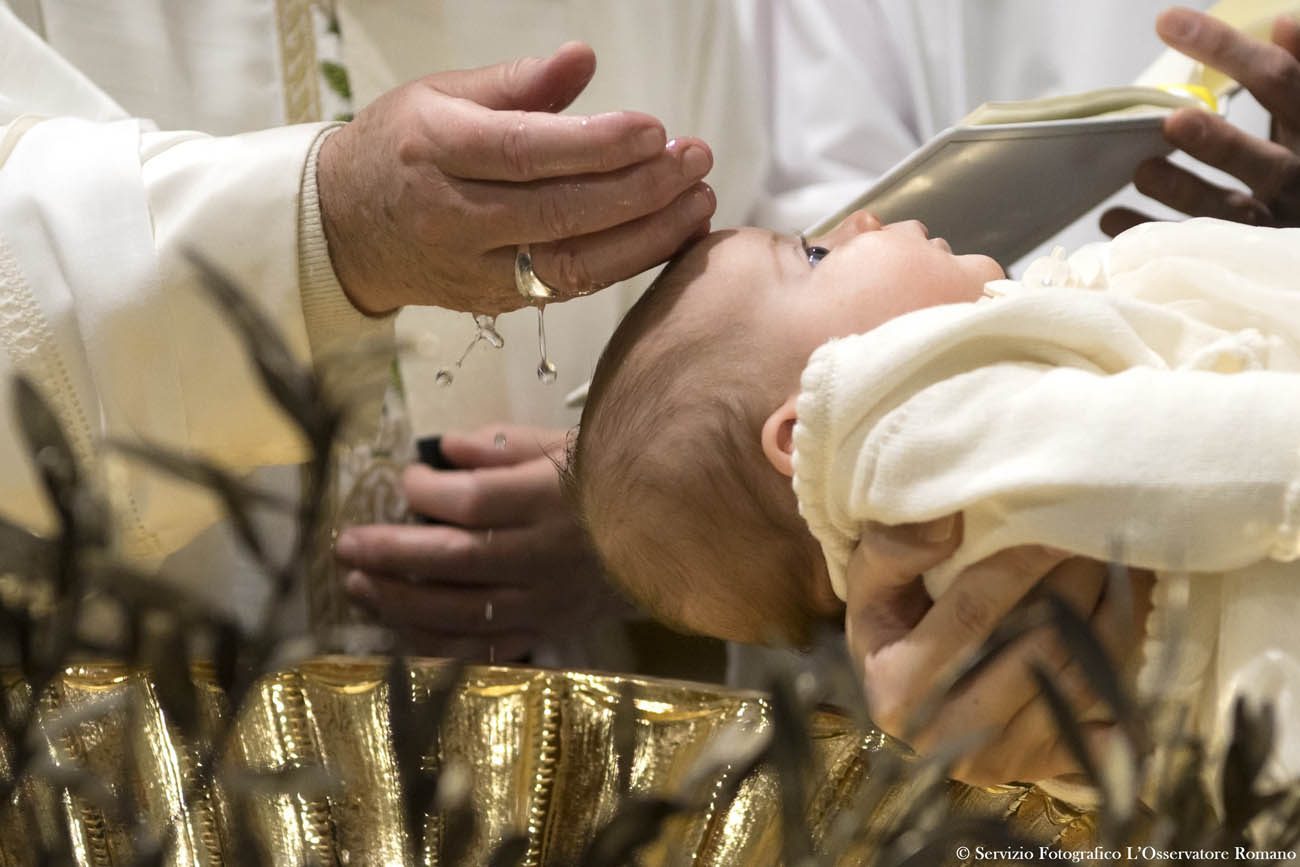 Pope Francis baptizes one of 28 babies in the Sistine Chapel at the Vatican Jan. 8. (CNS photo/L'Osservatore Romano, handout)

VATICAN CITY (CNS) — Parents are charged with guarding the faith given to their children at baptism and helping them become true witnesses by example rather than just rules, Pope Francis said.

By asking the church for faith for their children through the sacrament of baptism, Christian parents have the task of helping their children to grow so that they “may be witnesses for all of us: also for us priests, bishops, everyone,” the pope said during a Mass in the Sistine Chapel.

During the Mass Jan. 8, the feast of the baptism of the Lord, Pope Francis baptized 28 infants — 15 boys and 13 girls.

“Faith is not reciting the ‘Creed’ on Sunday when we go to Mass: It is not only this,” the pope said. “Faith is believing that which is the truth: God the father who has sent his son and the Spirit which gives us life.”

The pope’s brief homily centered on the meaning of faith, which he described as a lifelong journey that “is lived” and leads to becoming a witness of Christ.

Parents, he continued, must also teach through their example that faith “means trusting in God.”

While the pope spoke, the faint cries of a child echoed throughout the Sistine Chapel, causing a chain reaction of crying infants.

“The concert has begun!” the pope said jokingly. “It is because the children are in a place they do not know; they woke up earlier than usual. One begins with one note and then the others mimic. Some cry simply because another one cried.”

Acknowledging that some babies might be crying because they are hungry, the pope urged the mothers to not be ashamed to breast-feed their children in the chapel.

“Mothers, nurse them without fear, with all normality, like Our Lady nursed Jesus,” he told them.

Sunny Hallowell, a pediatric nurse practitioner and assistant professor at Villanova University’s College of Nursing who encourages new mothers to breastfeed as they transition from hospital to home, welcomed the pope’s comments.

“The normalization of breastfeeding during Mass has the potential to alleviate the anxiety of many mothers who invest considerable effort into breastfeeding their infants,” Hallowell said.

“The pope’s simple and supportive remarks may improve breastfeeding duration rates around the globe by sending the message that mothers are welcome at Mass to receive spiritual nourishment and especially if they find they must provide nourishment to their infants during the (Mass).”

Later, before praying the Angelus with those gathered in St. Peter’s Square, Pope Francis said the feast of the Lord’s baptism helps “us to the rediscover the beauty of being a baptized people.”

The baptized, he said, are “sinners saved by the grace of Christ, truly inserted by the power of the Holy Spirit in the filial relationship of Jesus with the father and welcomed into the womb of mother church” where Christians are capable of being brothers and sisters with everyone.

Noting John the Baptist’s feelings of unworthiness in baptizing Jesus, Pope Francis said John was aware “of the great distance between him and Jesus.”

However, Jesus came into the world to bridge the gap between God and man and “to reunite that which was divided,” he said.

After his baptism, Jesus begins his mission of salvation, which is characterized “by the style of a humble and meek servant, armed only with the strength of truth,” he said.

All Christians, the pope added, are called to follow Jesus’ style of proclaiming the Gospel without “shouting or scolding someone.”

“True mission is never proselytism but rather attraction to Christ. But how? How is attraction to Christ done? With one’s own witness that comes from a strong union with him through prayer, adoration and concrete charity, which is service to Jesus present in the least of our brothers,” he said.

After reciting the Angelus prayer, Pope Francis prayed for the parents and for the children he baptized, as well as for a “young catechumen” he baptized Jan. 7 in the chapel of the Domus Sanctae Marthae, where he lives.

The Vatican provided no further details about the young person.

“I invoke the Holy Spirit upon them and their children so that this sacrament, which is so simple yet at the same time so important, may be lived with faith and joy,” the pope said.

NEXT: Pope to diplomats: Break bad habits of war, injustice