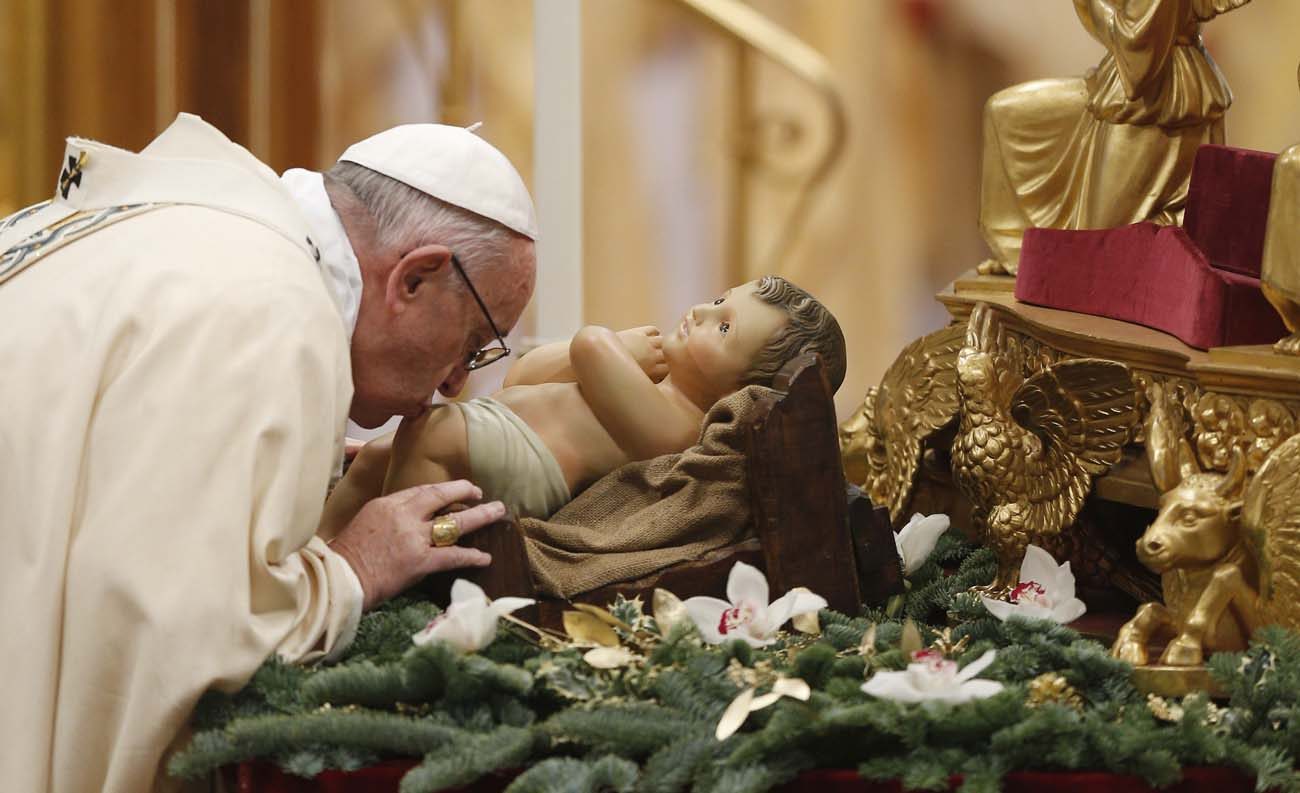 Pope Francis kisses a figurine of the baby Jesus as the start of a Mass marking the feast of the Epiphany in St. Peter's Basilica at the Vatican Jan. 6. (CNS photo/Paul Haring)

VATICAN CITY (CNS) — The Magi had the courage to set out on a journey in the hope of finding something new, unlike Herod who was full of himself and unwilling to change his ways, Pope Francis said.

The Wise Men who set out from the East in search of Jesus personify all those who long for God and reflect “all those who in their lives have let their hearts be anesthetized,” the pope said Jan. 6, the feast of the Epiphany.

“The Magi experienced longing; they were tired of the usual fare. They were all too familiar with, and weary of, the Herods of their own day. But there, in Bethlehem, was a promise of newness, of gratuity,” he said.

Thousands of people were gathered in St. Peter’s Basilica as the pope entered to the sounds of the choir singing “Angels we have heard on high” in Latin. Before taking his place in front of the altar, the pope stood in front of a statue of baby Jesus, spending several minutes in veneration before kissing it.

Seeing the star of Bethlehem did not prompt them to embark on their journey but rather, “they saw the star because they had already set out,” he said.

“Their hearts were open to the horizon and they could see what the heavens were showing them, for they were guided by an inner restlessness. They were open to something new,” the pope said.

This restlessness, he continued, awakens a longing for God that exists in the hearts of all believers who know “that the Gospel is not an event of the past but of the present.”

Recalling the biblical figures of Simeon, the prodigal son, and Mary Magdalene, the pope said this longing for God “draws us out of our iron-clad isolation, which makes us think that nothing can change,” and helps us seek Christ.

However, the figure of King Herod presents a different attitude of bewilderment and fear that, when confronted with something new, “closes in on itself and its own achievements, its knowledge, its successes.”

The quest of the Magi led them first to Herod’s palace that, although it befits the birth of king, is only a sign of “power, outward appearances and superiority. Idols that promise only sorrow and enslavement,” he said.

“There, in the palace, they did not see the star guiding them to discover a God who wants to be loved. For only under the banner of freedom, not tyranny, is it possible to realize that the gaze of this unknown but desired king does not abase, enslave, or imprison us,” the pope said.

Unlike the Magi, the pope added, Herod is unable to worship the newborn king because he was unwilling to change his way of thinking and “did not want to stop worshiping himself, believing that everything revolved around him.”

Christians are called to imitate the wise men who, “weary of the Herods of their own day,” set out in search of the promise of something new.

“The Magi were able to worship, because they had the courage to set out. And as they fell to their knees before the small, poor and vulnerable infant, the unexpected and unknown child of Bethlehem, they discovered the glory of God,” the pope said.

After the Mass, Pope Francis greeted tens of thousands of people gathered in St. Peter’s Square to celebrate the feast of the Epiphany.

A colorful parade led by the sounds of trumpets and drums, people dressed in traditional and festive clothing contributed to the cheerful atmosphere despite the chilly weather.

Explaining the significance of the Wise Men who presented their gifts to Christ after adoring him, the pope gave the crowds a gift: a small booklet of reflections on mercy.

The book, entitled “Icons of Mercy,” presents “six Gospel episodes that recall the experience of people transformed by Jesus’ love: the sinful woman, Zacchaeus, Matthew, the publican, the Samaritan, the good thief and the apostle Peter. Six icons of mercy,” the papal almoner’s office said.

Together with the homeless, poor men and women and refugees, religious men and women distributed the books to the crowd. As a thank you, Pope also offered more than 300 homeless men and women sandwiches and drinks.