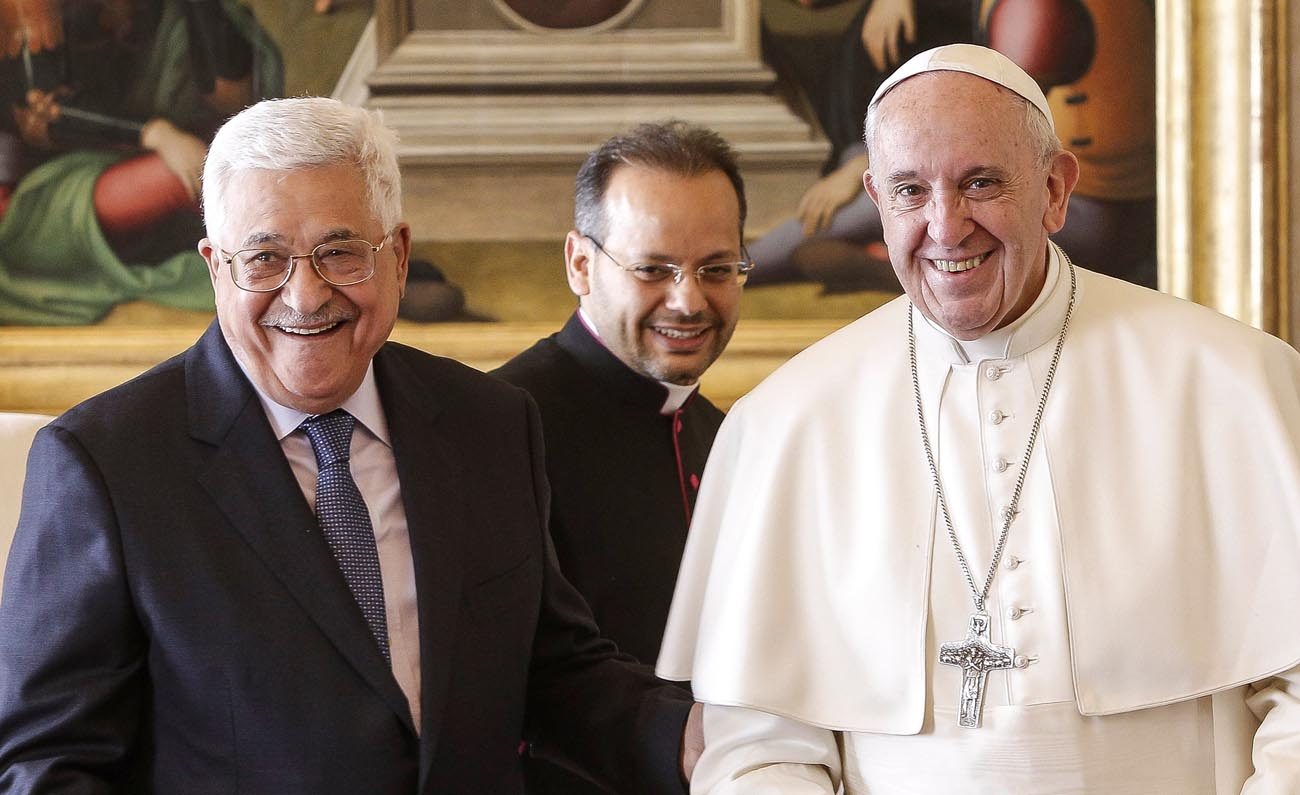 “This is a sign that the pope loves the Palestinian people and loves peace,” Abbas told the pope Jan. 14 before heading to the inauguration of the Palestinian embassy to the Holy See in Rome.

The pope welcomed Abbas with open arms, embracing the president and saying, “It is a pleasure to welcome you here.”

“I am also happy to be here,” Abbas replied.

The Vatican said the two leaders spoke privately of the contribution of Catholics in Palestine and their “promotion of human dignity and assistance for those most in need, especially in the fields of education, health and aid.”

The pope and Abbas also discussed the peace process and expressed hope that “direct negotiations between the parties may be resumed to bring an end to the violence” and to find “a just and lasting solution.”

“To this end, it is hoped that — with the support of the international community — measures can be taken that favor mutual trust and contribute to creating a climate that permits courageous decisions to be made in favor of peace,” the Vatican said.

The protection of holy sites “for believers of all three of the Abrahamic religions” was also discussed, the statement said.

After the pope and president spent more than 20 minutes speaking in private, Abbas introduced Pope Francis to the Palestinian officials traveling with him.

One member of the delegation joked with the pope about the pope’s favorite soccer team, San Lorenzo, before giving Pope Francis a soccer jersey with the colors of the Palestinian flag.

The pope gave the president a gold commemorative medallion of the Holy Year of Mercy and Arabic translations of “Amoris Laetitia” (“The Joy of Love”) and “Laudato Si’, on Care for Our Common Home.”

Issa Kassissieh, Palestinian ambassador to the Holy See, said the new embassy was “a significant achievement for the Palestinian people, considering that the pope has taken a moral, legal and political stand through recognizing the state of Palestine.”

In an interview Jan. 12 with Palestinian news agency, WAFA, Kassissieh said the new embassy “marks the outcome” of improved relations between Palestine and the Holy See after the signing in June 2015 of an agreement that supports a two-state solution to the ongoing conflict in the Holy Land.

Abbas’ visit came on the eve of an international peace conference in Paris Jan. 15 aimed at restating the international community’s support for the peace process.

However, Israeli Prime Minister Benjamin Netanyahu denounced the gathering as a “rigged conference” that seeks to adopt anti-Israeli policies.

“This pushes peace backward. It’s not going to obligate us. It’s a relic of the past. It’s a last gasp of the past before the future sets in,” Netanyahu said Jan. 12 following a meeting with Norway’s foreign minister, Borge Bende.

President-elect Donald Trump’s proposal to move the U.S. embassy in Israel from Tel Aviv to Jerusalem is also a cause for concern for the Palestinian government as both states claim the city as their rightful capital.

The two-state solution would split the city and allow for Palestine to claim East Jerusalem as their capital. Israel, however, claims the entire city as its capital.

According to WAFA, Abbas wrote to Trump Jan. 9 and said the move likely would have a “disastrous impact on the peace process, on the two-state solution and on the stability and security of the entire region.”

Following his meeting with Pope Francis, President Abbas told journalists he hoped President-elect Trump would not move forward with the proposal.

“We are waiting to see if it happens. If it does it will not help peace and we hope it does not happen,” Abbas said.

Despite the looming threats to the peace process, President Abbas said he hoped that the example set by the Palestinians agreement with the Vatican will allow European countries to follow suit in order to achieve peace.

“I met his Holiness and (thanked him that) the Holy See has completely recognized Palestine as an independent state and I hope that other states will follow the Vatican’s example and recognize the state of Palestine,” Abbas said.