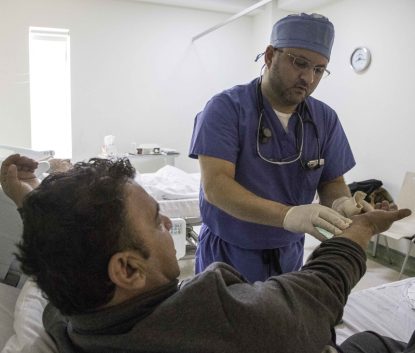 MAFRAQ, Jordan (CNS) — American doctors and nurses on a medical mission to Jordan are performing badly needed surgeries and other medical treatment free of charge to thousands of Syrian refugees who can no longer afford basic health care.

Dr. Bassel Atassi of the Little Company of Mary Hospital, a not-for-profit Catholic community hospital on Chicago’s South Side, led the 80-member mission.

Fanning out across Jordan, under the auspices of the Syrian American Medical Society, teams provided cardiac, eye and orthopedic surgeries; others offered care in pediatrics, obstetrics, dentistry, pain management and nephrology for refugees, inside camps and in the community. They also aided poor Jordanians.

Atassi, originally from Homs and Aleppo, Syria, said the brutal, nearly six-year Syrian conflict has scattered his immediate family around the globe.

One of the two main oncologists at Little Company, Atassi praised the hospital for its support.

“The hospital donated medications and other supplies to the mission. The last time I was here in the fall, the hospital asked me to speak at a big meeting about the mission, showing my documentary video. They are very appreciative of this effort,” Atassi told the Catholic News Service.

Compassion for the sick and cancer treatment is deep-rooted at Little Company. It founder, Venerable Mary Potter, fought a personal battle with cancer. The hospital has a state-of-the art cancer center affiliated with the University of Chicago Hospital. While the latest technology is key to treatment, so too, Little Company says, is the “spiritual connection of prayer to the healing process.”

“The hospital has a real humanitarian ethos,” said Dr. Junaid Makda, an orthopedic surgeon who also works at Little Company and joined Atassi on the mission.

“This trip really ties into the hospital’s mission statement of giving back and across all religions. That is something that is fundamental to everyone,” Makda told CNS during a clinic held in Mafraq, a northern Jordanian town hosting thousands of Syrian refugees near the Syrian border.

Aminah, a former teacher who fled the Syrian conflict three years ago with her tiny daughters, waited for treatment at the clinic in Mafraq.

“Life in Jordan is very difficult for us,” said Aminah, who asked to be identified by her first name only for fear of reprisals against family members still inside Syria.

“It’s difficult to find work, our funds are finished, and so I’m grateful that these doctors have come here to help us and provide medicines free of charge. This is a great blessing,” the petite woman, sporting a leopard-print headscarf, told CNS as refugee children raced around the packed waiting room.

Atassi said the Syrian American Medical Society does most of its work in Syria, while carrying out missions in neighboring countries that host the refugees.

“SAMS used to be a small organization with few members. Now in 2017, we have thousands of members and hundreds of people employed both inside and outside Syria,” said the doctor, citing the crisis in Syria as a real turning point for the nonprofit medical relief organization with offices in Washington, Jordan, Lebanon and Turkey.

“SAMS has been one of the first responders and biggest nongovernmental organizations bringing medical relief inside Syria, often through its field hospitals, including in Aleppo,” Atassi said. As of September, the group said it had treated more than 2.7 million Syrians.

Atassi said that during the recent battle for control of Aleppo, SAMS operated the largest field hospital in the eastern part of the city. It had been hit several times before, but the recent attacks left it completely destroyed.

“Some doctors lost their lives, others were injured. The majority evacuated to safe zones. They demonstrated a lot of dedication. After the evacuation, SAMS has opened new facilities for these doctors,” Atassi said.

Lona Gabree’s eyes welled up with tears when she explained why she traveled to Jordan for the first time to aid Syrian refugees.

The nurse for the past 27 years from Claverack, New York, told CNS, “There is a crying need for help here and, because I can do it and my heart is here, why not rise up and grab the chance.”

Gabree anticipated having to deal with a lot of post-traumatic stress suffered by the refugees.

“I helped people dealing with PTSD right after Hurricane Katrina,” she said. “I was very humbled to work there and am now humbled to be here.”

Dr. Soroosh Behshad, a cornea specialist and ophthalmologist at Atlanta’s Emory University, told CNS he wanted to participate in the mission because, as a child, he was a refugee, and he knows what that experience means for the many displaced Syrians.

“My parents fled first to Pakistan after the Iranian Revolution, when my mother was pregnant. Later they made it to Austria and finally to the United States, where our family settled, I was schooled and am now a doctor,” he said.

Atassi said he experienced one of his toughest days as a cancer doctor at one of Jordan’s camps for Syrian refugees.

“I’m an oncologist and used to delivering bad news. But today I was almost going to cry,” he said.

“I saw the tears of the young woman and the faces of some family members. It was bad. My hands are tied here. If I am back at my clinic in Chicago, I can do tons of stuff for her. I can cure her. But today, I can’t do anything. You try to refer her to agencies that can help and you just hope for the best,” Atassi said.

NEXT: New embassy a sign of pope’s love for Palestine, Abbas says