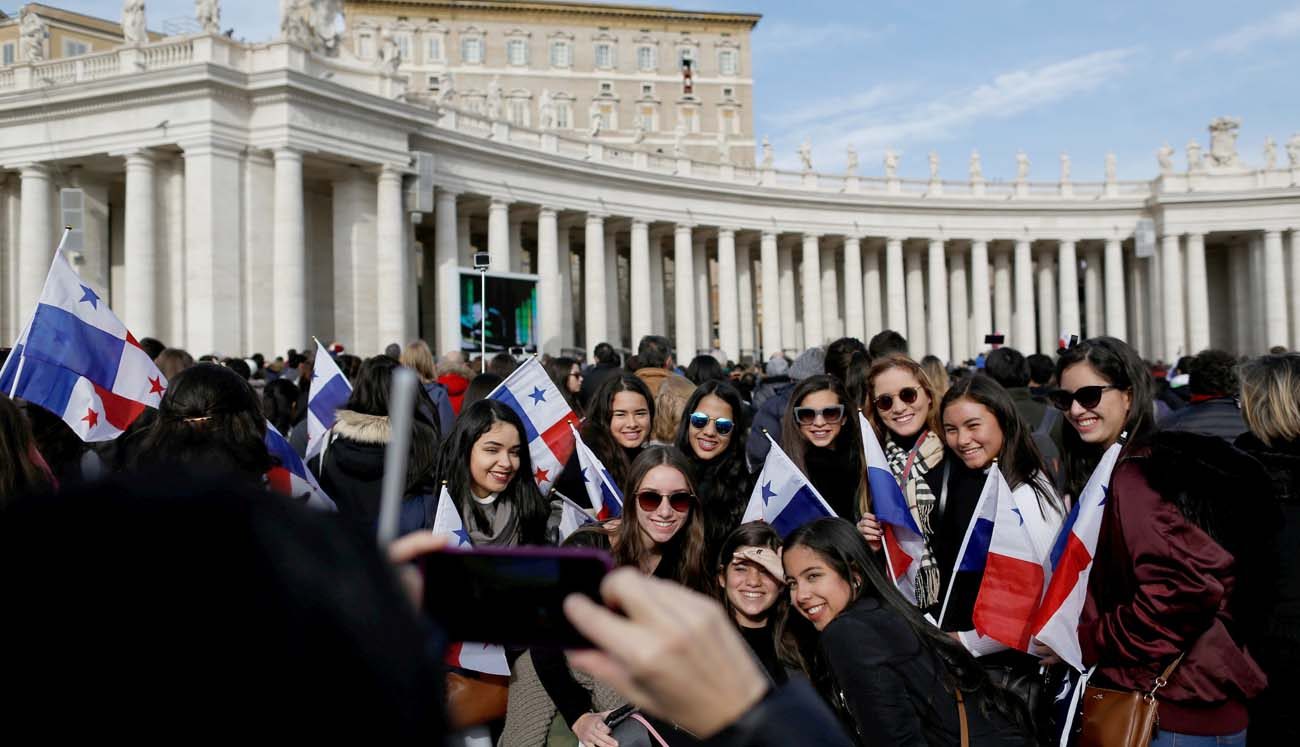 Students from Panama pose for a photo as Pope Francis leads the Angelus Jan. 22 in St. Peter's Square at the Vatican. (CNS photo/Tony Gentile, Reuters)

VATICAN CITY (CNS) — True conversion means Christians must not only change their way of living, but also transform their way of thinking in order to respond to Christ’s call to proclaim the Gospel, Pope Francis said.

“It is a transformation of thought. It is not about changing garments but habits!” the pope said Jan. 22 during his Angelus address.

The pope reflected on the Sunday Gospel reading (Mt. 4, 12-23), which describes Jesus beginning his ministry in Galilee, a place that was a not only a geographic “periphery,” but also considered religiously impure because it was “full of pagans.”

“Great things for the history of salvation were certainly not expected from Galilee,” the pope said. Yet, “the light of Christ is spread precisely from the periphery.”

Jesus’ “style and method” was going out to encounter people rather than waiting for them to come to him, the pope said. Like his call to the fishermen to follow him, Jesus calls each person not in “an extraordinary or sensational way but in our everyday lives. And there — in this dialogue with him in our everyday lives — our heart changes.”

After reciting the Angelus prayer, Pope Francis led the people in St. Peter’s Square in praying a Hail Mary for the victims of an avalanche that buried a hotel in the Apennine Mountains after a series of earthquakes in central Italy.

The pope also thanked rescuers who had saved nine people. As of Jan. 23, the death toll stood at six, but another 22 people were missing and believed buried underneath mounds of snow and ice.

“With prayer and affection, I am close to the families whose dear ones were among the victims,” the pope said. “I encourage all those who are committed with great generosity in rescue efforts and assistance, as well as the local churches, which are doing their utmost to alleviate the sufferings and difficulties.”