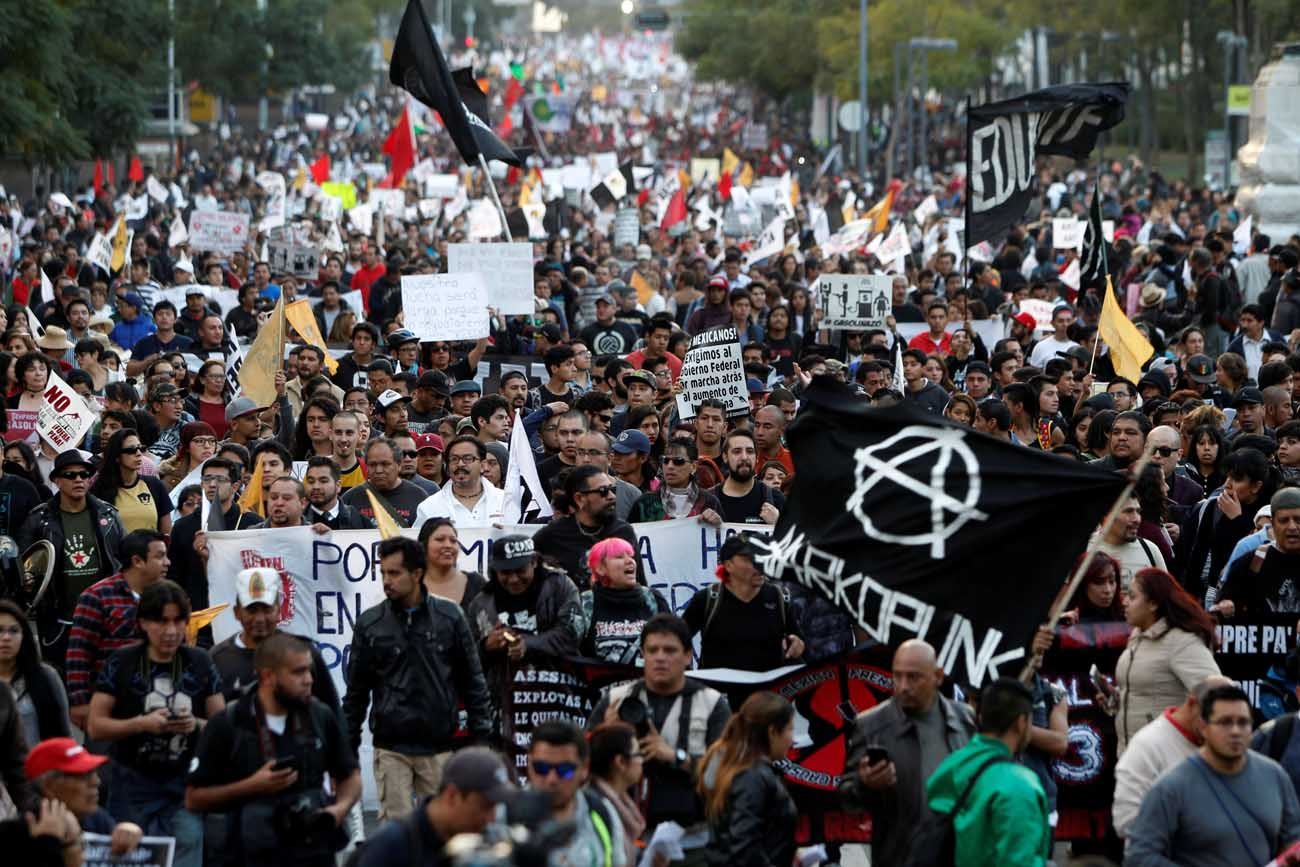 On Jan. 22, Trump said he had set up meetings with Mexican and Canadian leaders to renegotiate the North American Free Trade Agreement, which he has said benefited Mexico the most and has described as “the worst trade deal maybe signed anywhere.” NAFTA allows more than $500 billion in annual trade between Mexico and the United States.

Under NAFTA, parts of Mexico have boomed, such as an area known as the El Bajio region to the north and west of Mexico City, where automotive manufacturers moved in and growth rates were at times on par with places like China. Manufacturing also started underpinning the economy in many parts of the country and replacing income from oil sales as a source of foreign reserves.

Critics contend that wages have stayed stubbornly low, while rural areas suffered an outflow and, in much of the country, the growth of the last 20 years has underwhelmed and failed to propel Mexico to the “First World” status NAFTA proponents had promised.

But Trump’s talk tough and tweet storms — in which he tells manufacturers to move production north — have caused investment uncertainty and sent the peso plunging to record low levels.

Ford announced plans in early January to forgo a $1.6 billion investment in the state of San Luis Potosi, deepening fears that manufacturing, toward which the Mexican economy has oriented in recent years, might slow.

Many Mexicans “think Trump is going to force these companies to close their Mexican plants and they will all be out of work,” said Father Robert Coogan, a U.S. priest in Saltillo, a city about 190 miles from the Texas border at Laredo. The automobile industry in Saltillo has expanded rapidly in recent years.

The Diocese of Matamoros includes Reynosa, home to many maquiladoras, or factories for export.

Father Alan Camargo, diocesan spokesman, told Catholic News Service: “The experience up until now is that there’s been fear, but no unemployment. … There’s uncertainty, but people are still employed, and even more people are still arriving from other states.”

Representatives of Reynosa’s maquiladora industry and municipal government say newcomers continue arriving in the border city of 600,000 people, where unemployment is nonexistent; government statistics show jobs in the maquiladoras increased 13 percent in 2016.

“New projects have stopped until we know how things are going to work under Trump, but those that are here are continuing with their expansion,” said Martha Ramos, director of Index Reynosa, the maquiladoras’ business association.

Ramos and others in the industry say Mexico has succeeded in manufacturing by having trade deals with more than 40 countries, making it attractive for companies wanting to export globally. She added that productivity is high, while costs are low.

The low costs are contentious for some, since workers’ wages are often less than $10 per day, rates higher than many other jobs in Mexico. An editorial in the Archdiocese of Mexico City publication Desde la Fe pointed to studies showing Mexican workers having lost 11 percent of their purchasing power over the past three years, while wages have not kept up.

“We’re talking about $100 per month and families of four or five people,” said Father Jose Hugo Mercado, pastor of the Immaculate Conception parish in Reynosa.

As a priest, he sees parishioners increasingly buying and selling used clothes, families forgoing leisure activities and kids succumbing to the temptations of the drug cartels, which have operated with impunity in Reynosa and turned the city frighteningly violent at times.

“It’s easy money,” Father Mercado said. “Although they are conscious that they won’t die old … they prefer economic stability to a long life. Even so, many decide to get involved (in drug trafficking).”

The uncertainty over the future comes as the country convulses with protests, especially over a 20-percent hike in the government-set gasoline price, which many of those marching insist will cause all other prices to rise and trigger inflation. Others also insist that politicians are living large with generous salaries and committing acts of corruption so vile that two ex-governors in Veracruz state are accused of purchasing phony cancer drugs for the state health system.

“Mexicans are not willing to continue (making) sacrifices when a minority is lazily lounging at top rungs of power,” Desde la Fe wrote.

But some in the church see some upside to Trump’s plans.

“Paradoxically, the Trump phenomenon could be an opportunity for Mexico to awaken,” Father Alejandro Solalinde, an activist priest in Oaxaca state, told the Spanish newspaper El Pais. “We have dozens of years of submission to the United States and of abandonment and violence, and it would have stayed the same with Hillary Clinton as president. In this way, Mexico can awaken and look inward.”