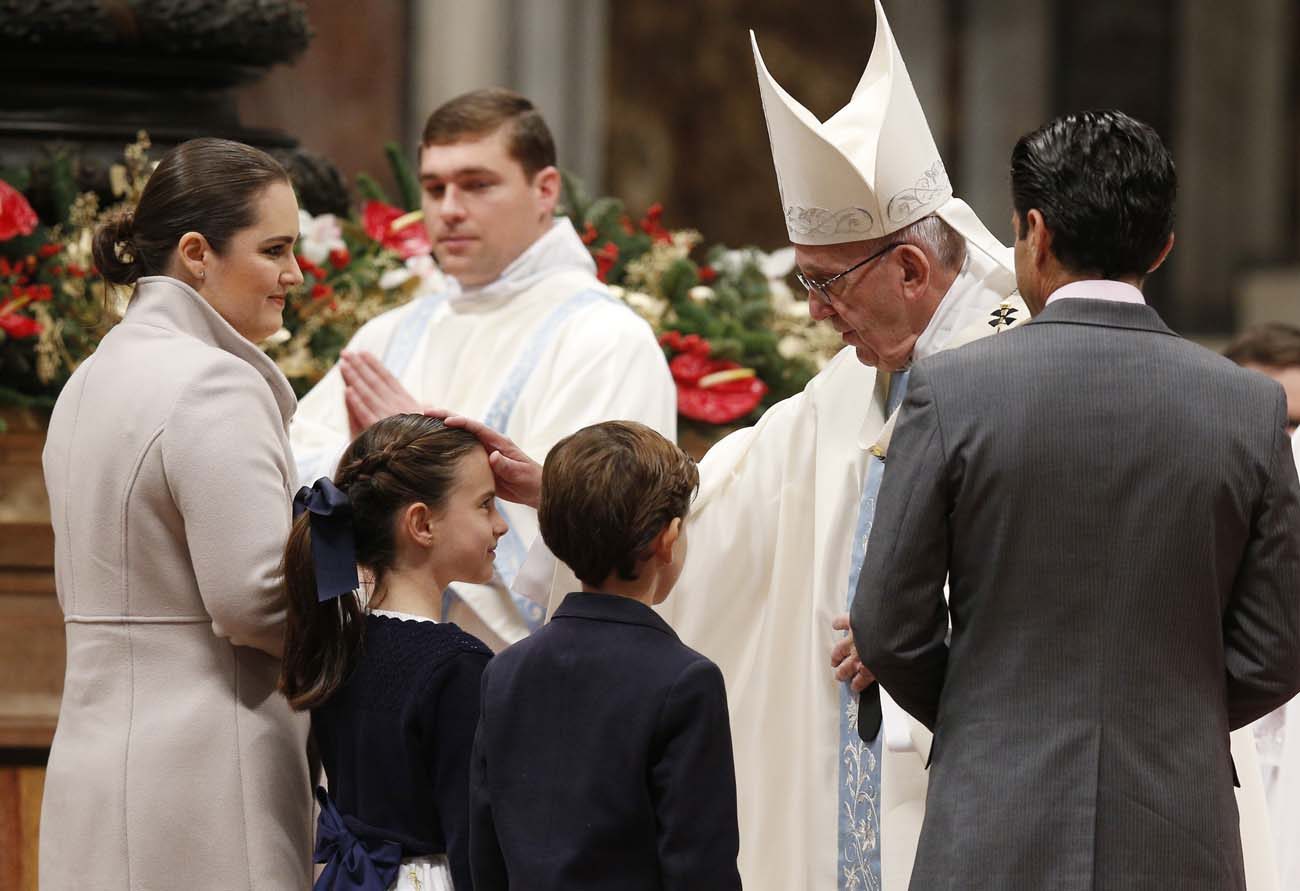 Pope Francis greets a family as they present offertory gifts during a Mass marking the feast of Mary, Mother of God, in St. Peter's Basilica at the Vatican Jan. 1. (CNS photo/Paul Haring)

VATICAN CITY (CNS) — Stand up and protect children from exploitation, slaughter and abuse, which includes committing to a policy of “zero tolerance” of sexual abuse by clergy, Pope Francis told the world’s bishops.

Wake up to what is happening to so many of today’s innocents and be moved by their plight and the cries of their mothers to do everything to protect life, helping it “be born and grow,” he said in a letter sent to bishops commemorating the feast of the Holy Innocents, Dec. 28. The Vatican press office published the letter and translations from the original Italian Jan. 2.

Just as King Herod’s men slaughtered young children of Bethlehem in his “unbridled thirst for power,” there are plenty of new Herods today — gang members, criminal networks and “merchants of death” — “who devour the innocence of our children” through slave labor, prostitution and exploitation, he said. Wars and forced immigration also strip children of their innocence, joy and dignity, he added.

The prophet Jeremiah was aware of this “sobbing and loud lamentation” and knew that Rachel was “weeping for her children, and she would not be consoled since they were no more.”

“Today too, we hear this heart-rending cry of pain, which we neither desire nor are able to ignore or to silence,” Pope Francis said.

“Christmas is also accompanied, whether we like it or not, by tears,” and the Gospel writers “did not disguise reality to make it more credible or attractive.”

Christmas and the birth of the son of God aren’t about escaping reality, but are a way to help “contemplate this cry of pain, to open our eyes and ears to what is going on around us, and to let our hearts be attentive and open to the pain of our neighbors, especially where children are involved. It also means realizing that that sad chapter in history is still being written today.”

Given such challenges, Pope Francis told the world’s bishops to look to St. Joseph as a role model.

This obedient and loyal man was capable of recognizing and listening to God’s voice, which meant St. Joseph could let himself be guided by his will and be moved by “what was going on around him and was able to interpret these events realistically.”

“The same thing is asked of us pastors today: to be men attentive, and not deaf, to the voice of God, and hence more sensitive to what is happening all around us,” he said.

Like St. Joseph, “we are asked not to let ourselves be robbed of joy. We are asked to protect this joy from the Herods of our own time. Like Joseph, we need the courage to respond to this reality, to arise and take it firmly in hand.”

The church weeps not only for children suffering the pain of poverty, malnutrition, lack of education, forced displacement, slavery and sexual exploitation, the pope said, she weeps “because she recognizes the sins of some of her members: the sufferings, the experiences and the pain of minors who were abused sexually by priests.”

“It is a sin that shames us,” he said, that people who were responsible for caring for children, “destroyed their dignity.”

Deploring “the sin of what happened, the sin of failing to help, the sin of covering up and denial, the sin of the abuse of power,” the church also begs for forgiveness, he said.

“Today, as we commemorate the feast of the Holy Innocents, I would like us to renew our complete commitment to ensuring that these atrocities will no longer take place in our midst. Let us find the courage needed to take all necessary measures and to protect in every way the lives of our children, so that such crimes may never be repeated. In this area, let us adhere, clearly and faithfully, to ‘zero tolerance,'” he said.

The pope urged the bishops to remember that Christian joy doesn’t ignore or sugarcoat reality, but “is born from a call” to embrace and protect life, “especially that of the holy innocents.”

He asked they renew their commitment to be shepherds with the courage to acknowledge what so many children are experiencing today and to work to guarantee the kind of conditions needed so their dignity will be respected and defended.

NEXT: Catholic leaders in Congo welcome church-mediated accord