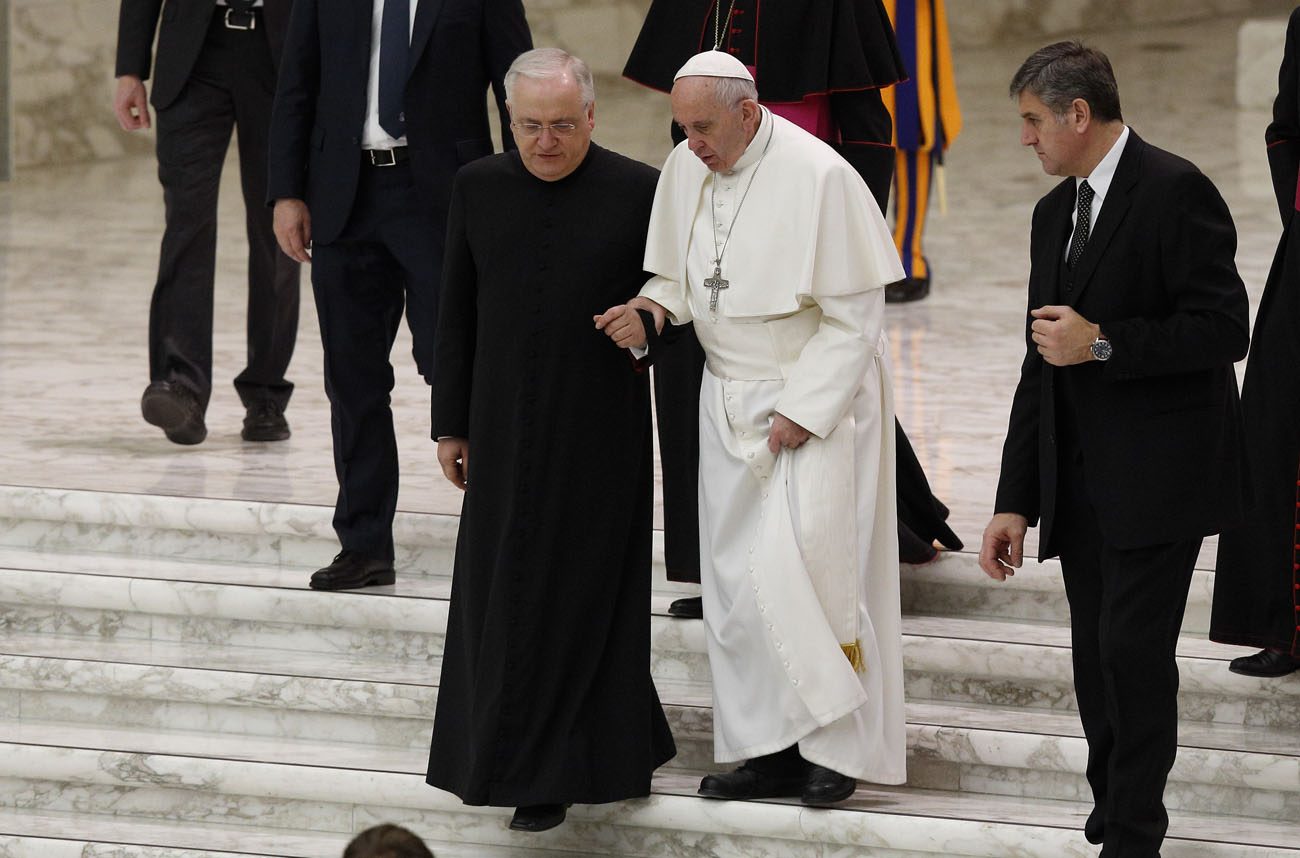 Pope Francis is assisted by Father Leonardo Sapienza, regent of the papal household, as he walks down stairs during his general audience in Paul VI hall at the Vatican Jan. 18. (CNS photo/Paul Haring)

VATICAN CITY (CNS) — Prayer has the power to awaken hope in men and women, even in the face of death and destruction, Pope Francis said.

People often feel unworthy to turn to God when they are in need “as if it were a self-interested prayer and, thus, imperfect,” the pope said Jan. 18 during his weekly general audience.

“But God knows our weakness; he knows that we remember him to ask for help and, with the indulgent smile of a father, he responds graciously,” he said.

Greeting thousands of people in the Paul VI audience hall, the pope seemed to lose his balance several times as pilgrims clasped his hand and tried pulling him toward them, hoping for a hug or a blessing.

Still, the pope took time to greet people, stopping to bless a pregnant woman’s belly and embracing a young boy in tears, who was overcome with emotion at meeting him.

The audience took place at the beginning of the annual Week of Prayer for Christian Unity, which for 2017 had the theme: “Reconciliation: The love of Christ compels us.”

Addressing the different language groups, the pope prayed that all Christian communities would “be open more to reconciliation” and communion.

“In this same spirit of hope and with gratitude for the progress already made in the ecumenical movement, I ask your prayers for this important intention,” the pope told the English-speaking pilgrims.

During the audience, the pope reflected on the prophet Jonah, a man who first tried to run away from God’s call and initially refused “to place himself at the service of the divine plan of salvation.”

Nevertheless, the story of Jonah is a “great lesson about the mercy of God who forgives,” the pope said.

Jonah fled from his task of preaching salvation to the people of Ninevah who — in the eyes of the Israelites — “deserved to be destroyed, not to be saved,” the pope said. But when a dangerous storm hit, the pagans aboard his ship immediately prayed to their gods; a just reaction in the face of death because only then “man experiences his own frailty and his own need of salvation,” he said.

“The instinctive horror of death awakens the need to hope in the God of life,” the pope said. People think, “‘Perhaps God will think of us and we will not perish.’ These are the words of hope that become a prayer, that plea full of anguish raised by the lips of man in front of an imminent danger of death.”

The storm passed once Jonah accepted his responsibility and asked to be thrown into the sea, the pope continued, which moved the pagans to a sincere fear of God and “to recognize the one true Lord of heaven and earth.”

The people of Ninevah, he added, also had the experience of facing death yet being saved in the end, which led them to know and experience the truth of God’s love.

This experience of God’s divine mercy is a reminder for all men and women to recognize the “surprising occasions of knowing hope and encountering God,” Pope Francis said.

“Prayer brings you to hope,” the pope said. “And when things become dark, with more prayer there will be more hope.”