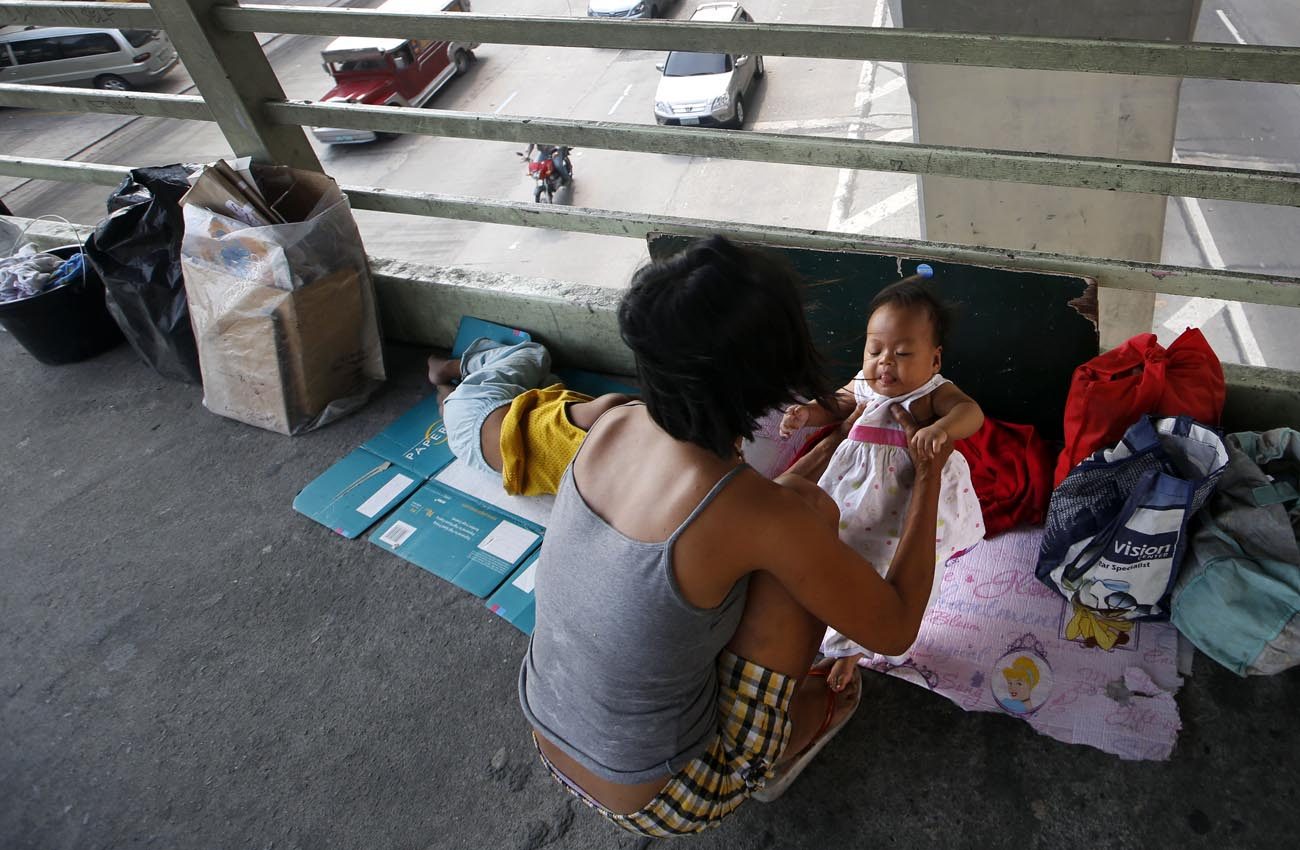 A mother holds her daughter in 2014 on a footbridge in Manila, Philippines. The Philippine president's executive order that the government begin distributing free contraceptives to the poor by 2018 may face delays because of a pending case before the country's Supreme Court. (CNS photo/Ritchie B. Tongo, EPA)

MANILA, Philippines (CNS) — The Philippine president’s executive order that the government begin distributing free contraceptives to the poor by 2018 may face delays because of a pending case before the country’s Supreme Court.

In June 2015, the court placed a temporary restraining order on the contraceptives provision of a 2012 reproductive health law after a challenge called for certain implant contraceptives to be studied as potentially abortion-inducing. Those were taken off the government offerings. By August 2016, the list of contraceptives that had to be checked for possibly causing abortions was expanded.

Father Castro, an outspoken critic of the law when it was still being vetted in Congress, told Catholic News Service, “I think some of our pro-life lawyers will question the executive order in the Supreme Court, precisely because there’s still a pending case in the Supreme Court.”

Duterte’s socio-economic secretary said Jan. 11 that the Philippines had to cut the poverty level to 14 or 13 percent from its current 21.6 percent by the end of Duterte’s term in 2022, and the executive order would “ensure zero unmet need for family planning” in the country whose 100 million people are more than 80 percent Catholic.

Multiple calls and text messages to the chairman of the Philippines bishops’ conference Commission on Family and Life went unanswered.

But Attorney Maria Concepcion Noche, president of the Alliance for the Family Foundation Philippines, said the executive order has no teeth.

“(It) did not overturn, nor did it override the temporary restraining order, so it does not have any effect on that,” Noche told CNS.

She said the emphasis of the president’s order is on contraception, which essentially whittles the entire reproductive health law down to a “population control” measure, without taking into account other aspects such as obstetric care, prenatal services, upgrading of medical facilities toward the service of the poor and other provisions.

The executive order “is not even about reproductive health,” she said.

Dr. Junice Melgar, head of Likhaan Center for Women’s Health, said the temporary restraining order has called for public hearings of the Philippines Food and Drug Administration, which she says is unprecedented and will further bog down any move toward distributing the contraceptives.

She told CNS, “In general … many of us in the reproductive health community are happy that the executive branch thinks there should be a strong enforcement of the law.”

Melgar pointed out the Duterte administration’s strongman approach to what he dubbed the country’s “drug problem.” Since Duterte came into office in June 2016 after running on a campaign to rid the country of criminals, about 6,200 people have died in both police anti-drug operations and from vigilante killings of alleged drug dealers and addicts. A majority of those killed come from the ranks of the country’s poorest, who mostly constitute Likhaan’s clientele.

“The executive hand is very strong in the Philippines at this point,” she said. “Even its drug campaign. It’s able to use force, actually, supposedly to end the drug problem in the Philippines. So I don’t know if it has the power as well to sort of negotiate with the Supreme Court.”

But Melgar called this a double-edged sword. She said without the free government contraceptives, her nongovernmental organization’s clinics are relying on contraception donations from the U.S. and other European countries, which all have been critical of the Philippine war on drugs and have threatened to withhold aid to the Philippines. She said even her group’s education campaign of going out to poor neighborhoods and teaching about contraception is being hampered because workers are too afraid to go to areas where people are being killed in the “war on drugs.”

During his six months in office, Duterte has alluded to possibly declaring martial law to better enforce his anti-drug campaign, and he has said several times in speeches he would have to change a provision that requires Supreme Court and Congressional consensus to do this, indicating a willingness to take on the nation’s high court.

“It would be great, that commitment from the executive branch, but of course we are worried, too,” said Melgar. “If it’s going to be family planning at the point of a gun, that will not be good.”