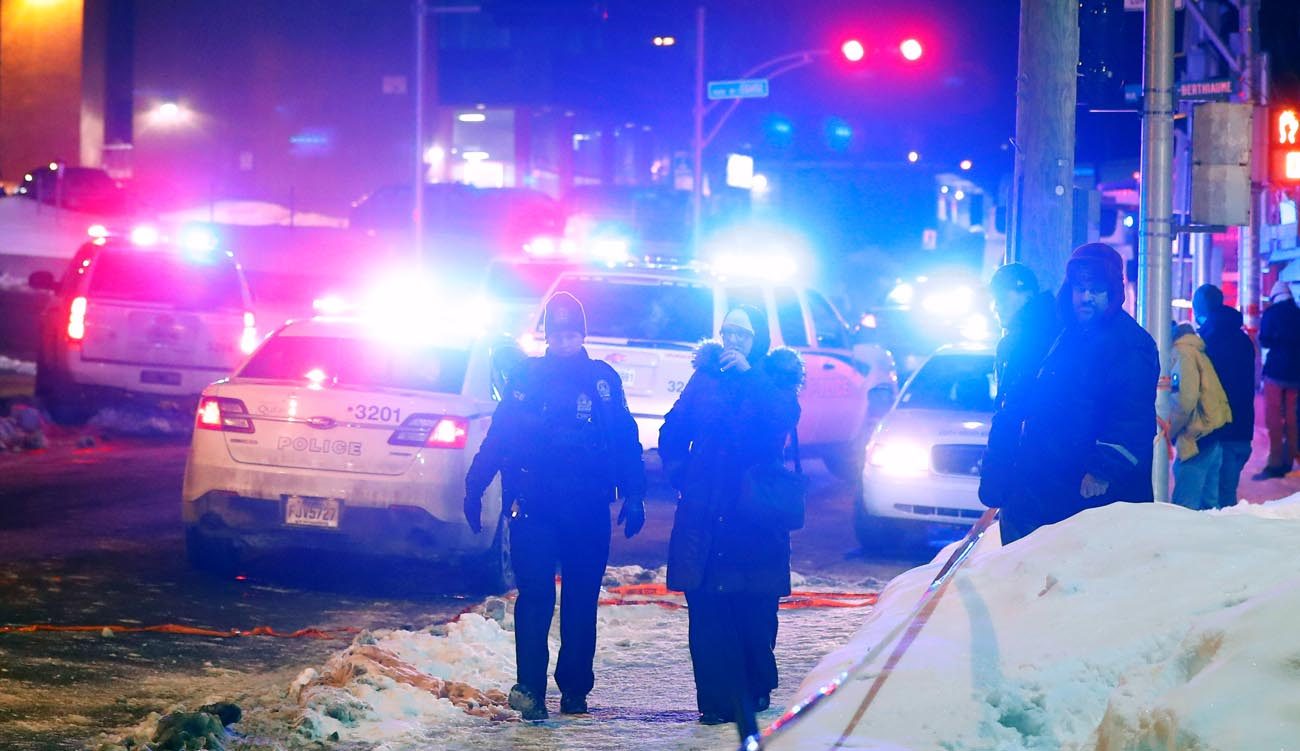 Police officers are seen near a mosque after a shooting in Quebec Jan. 29. (CNS photo/Mathieu Belanger, Reuters)

Vigils were scheduled Jan. 30 in Quebec City and Montreal, the evening after a man entered the Quebec Islamic Cultural Center and opened fire, killing at least six men who were praying and injuring 19 more. Police later said they had arrested a suspect in the attack, the motive for which remained unclear.

Pope Francis met with Quebec Archbishop Cardinal Gerald Lacroix in Rome Jan. 30 and assured him of his prayers for the victims of the attack on the mosque. A Vatican statement said the pope highlighted the importance of Christians and Muslims remaining united in prayer in these moments.

Archbishop Christian Lepine of Montreal said: “Nothing can justify such murderous acts aimed at innocent people. We are called to say again that, whatever our beliefs are, as human beings we are all brothers and sisters, all equal in dignity.”

Bishop Douglas Crosby of Hamilton, Ontario, president of the Canadian Conference of Catholic Bishops, condemned the shooting, calling it “an assault on the right and freedom of the members of all religions to gather and pray in the name of their deepest beliefs.”

The Anglican bishops of Quebec City and Montreal were in Canterbury, England, when the attack occurred.

In a joint statement on the shooting, Coadjutor Bishop Bruce Myers of Quebec and Bishop Mary Irwin-Gibson of Montreal said: “Along with our grief and prayers we are called as disciples of Jesus to express our solidarity with our neighbors who are Muslim.”

“We wish to express directly to our Muslim neighbors in Quebec our grief and repugnance at this brutal act of violence against another community of faith, and one in the midst of prayer. When one is attacked, we are all attacked, and our whole society is diminished,” they insisted.

Archbishop J. Michael Miller of Vancouver, British Columbia, expressed shock and sadness about the attack and sent condolences to members of the cultural center and to Canada’s entire Muslim community. 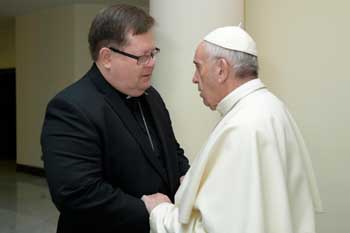 Pope Francis greets Cardinal Gerald Lacroix of Quebec after celebrating morning Mass in the chapel of his residence at the Vatican Jan. 30. A Vatican statement said the pope assured Cardinal Lacroix of his prayers for the victims of a shooting in a mosque in Quebec City. (CNS photo/L’Osservatore Romano, handout)

“Be assured we will continue to reach out in solidarity to the Muslim community, united in prayer with our Muslim brothers and sisters for the victims of this attack,” Archbishop Miller said in a statement Jan. 30.

Over the years, the mosque had been targeted by hate crimes. A few months ago, a pig’s head was left at the front door, sparking indignation throughout the city.

Quebec City is the capital of the province and its second-biggest city, with more than 500,000 people. It has 6,100 Muslims.

Canadian Prime Minister Justin Trudeau was scheduled to be in Quebec City Jan. 30.

“It was with tremendous shock, sadness and anger that I heard of this (Jan. 29) evening’s tragic and fatal shooting,” he said. “We condemn this terrorist attack on Muslims in a center of worship and refuge.”

Quebec Mayor Regis Labeaume stayed up all night to assess the situation.

“My first thoughts go to the victims and their families hit while they were gathered to pray. Quebec is an open city where all must be allowed to live together in security and respect,” he said.

“I invite the population to come together and stand united. Quebec is strong, Quebec is proud, Quebec is opened to the world,” he added.