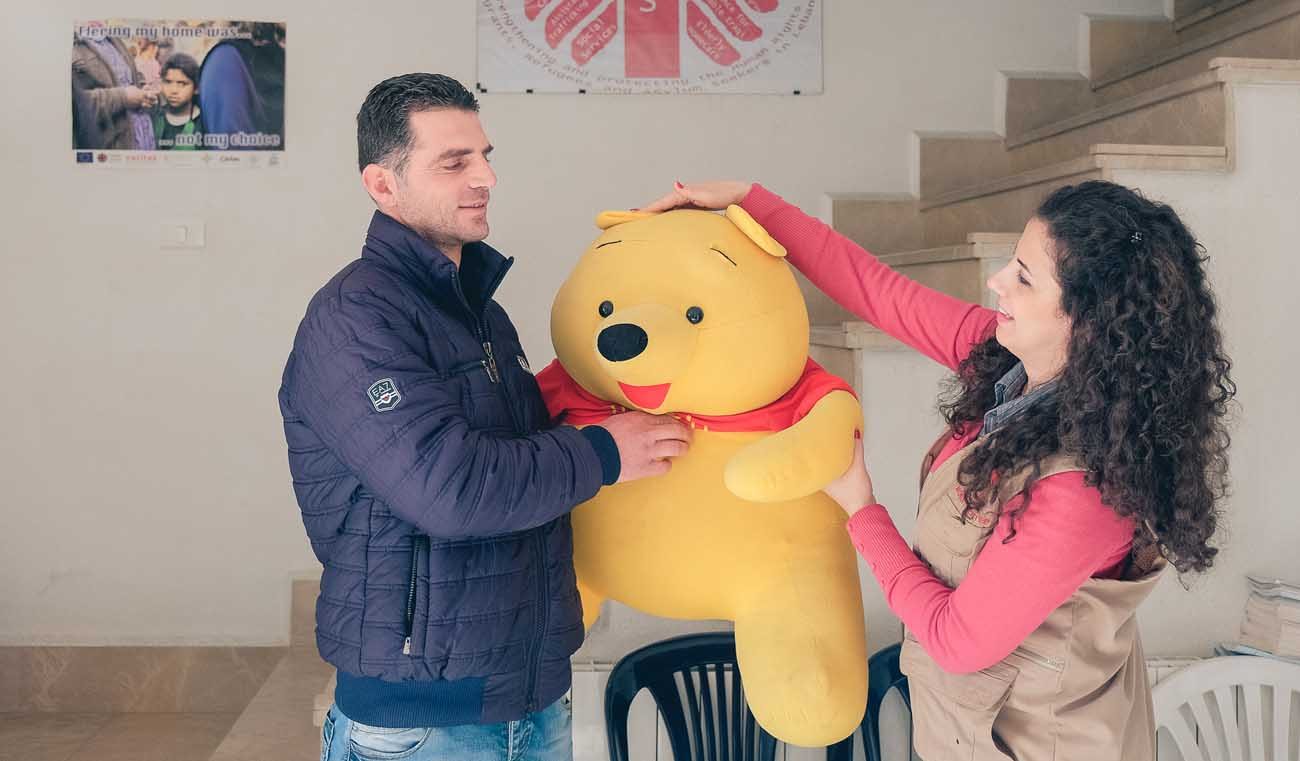 Mireille Saliba, right, Caritas Lebanon social worker, presents Syrian refugee Fadi Kyorkis with a stuffed animal for his two sons Jan. 4 as part of the Catholic charity's distribution of winter clothes for 16 families in Zahle. In all, 150 refugee families who live there are being assisted by the coordinated distribution. (CNS photo/Jean Khoury for Caritas Lebanon)

ZAHLE, Lebanon (CNS) — Balancing boxes and bags filled with warm clothes for his family, Malak Elias Mnayeri waited for a taxi in the near-freezing temperatures outside Caritas Lebanon’s center in Zahle, close to the Syrian border.

“Today I feel like a real father,” he told Catholic News Service, discussing the necessities he would take to his two children.

“We used to live in dignity,” Mnayeri said. “I never thought we’d be living like this, always in need.”

Through his work as an auto mechanic, Mnayeri’s family lived comfortably in Homs before the conflict started.

In their early days in Lebanon, the family received help from the U.N. Refugee Agency, the UNHCR. But the agency has not provided the family with any assistance in about two years, and only Caritas is helping them, he said.

“We are just living day-to-day,” said Mnayeri, who has not been able to find steady work. “I have no idea what the future will bring.”

“I’m so thankful to God that Caritas remembers us,” he added.

Mnayeri was one of the recipients of Caritas Lebanon’s distribution of winter clothes for 16 families in Zahle in early January. In all, 150 refugee families who live there are being assisted by the coordinated distribution. Each family was registered individually and the winter items — including pants, sweaters, jackets, socks, hats, scarves and gloves — were selected based on age and gender.

Most of the items were donated to Caritas by Lebanese individuals and nongovernmental organizations in the country and, before distribution, filled up eight garage-sized storage rooms, said Ramzi Abou Zeid, regional coordinator for Caritas Lebanon. He said the project took three months to prepare.

In the Bekaa region of Lebanon where Zahle is located, the winter chill lasts through April. As intermittent rain fell during the Jan. 4 distribution, the surrounding hills and mountains in the Bekaa resembled towering snowdrifts.

Especially for refugees, central heating is a luxury. Typically, families gather around a kerosene-burning stove to keep warm in the damp, concrete-walled apartments where they live. Most often they do not have money to buy the needed fuel.

Fadi Kyorkis, a Greek Orthodox also from Homs, told CNS that if the situation were better in Syria, he would go home with his family.

“We fled only to save our children,” he said. “When the terrorists came, it seemed they wanted to push the Christians out (of Syria). Before, we were living happily. We never expected we’d have to leave like we did.”

In Syria, the government pays for education and medical care. Getting proper medical treatment for his 7-year-old son and worrying about the future weigh heavily on Kyorkis and his wife. Their son has a congenital condition in which his legs are not developing normally.

“The doctor says it’s getting worse and in a few years he may not be able to walk. It’s very hard. We are so worried about him,” Kyorkis told CNS. The couple also have a 10-year-old son.

In Homs, Kyorkis owned a home furnishings store and owned his home. Now in Lebanon, he is working in a distillery for arak, the traditional Lebanese alcoholic beverage made from fermented grapes. Working overtime, he earns $400 a month, just enough to cover the $265 rent for their tiny two-room apartment.

The physical therapy sessions his son needs cost $230 a month. Caritas has been assisting the family in covering the fees.

“It’s a big help for my family. Without the help of Caritas, I don’t know how we’d survive,” Kyorkis told CNS.

In addition to the winter clothing he received for his family, Caritas also presented Kyorkis with a surprise to take home to his two sons: a big Winnie the Pooh stuffed bear.

“There are so many needs,” Mireille Saliba, Caritas Lebanon senior social worker, told CNS during a lull in the wave of beneficiaries who came for the winter distribution.

“Even though it can be very difficult every day facing people who live in such misery, we are applying the message of Caritas, the same message of God: that he wants us to help each other. This helps us to keep going,” Saliba said.

The Zahle center, like all the Caritas centers in Lebanon, also experiences a steady stream of newcomers.

A woman identified only as Leila and her sister-in-law, Zeinab, came to the center looking for assistance.

“Our neighbor told us Caritas helps a lot of people,” Zeinab told CNS at the center, with a hopeful look in her eyes. The two Muslim Syrian refugees explained that they needed basic necessities for their families: food, clothing, medicine and fuel for their portable heater.

It’s been a year-and-a-half since Leila’s husband went back to Adra, Syria, to check on the situation there. She has not heard from him since and has been living with her brother and his family. It was difficult enough for her brother to support one family, let alone two, on the wages he receives as an occasional day laborer. Their dwelling in Zahle is essentially one room. There are five children in all, ranging in age from 9 to 16, between the two families. Leila’s youngest daughter has a heart condition, adding to her concern about the future of her family.

A Caritas social worker recorded the necessary information to open a case file. Next, Caritas will visit the families’ home to assess their needs.

In Zahle, Caritas also operates a mobile medical clinic and a medical clinic with a team of 24 doctors that also serves the local Lebanese population. Last year, nearly 2,000 Syrian refugee children were vaccinated at the clinic.

Early this year Caritas also will open a new community center that will offer life skills training and vocational training, aimed at helping Syrian refugees to be more productive.