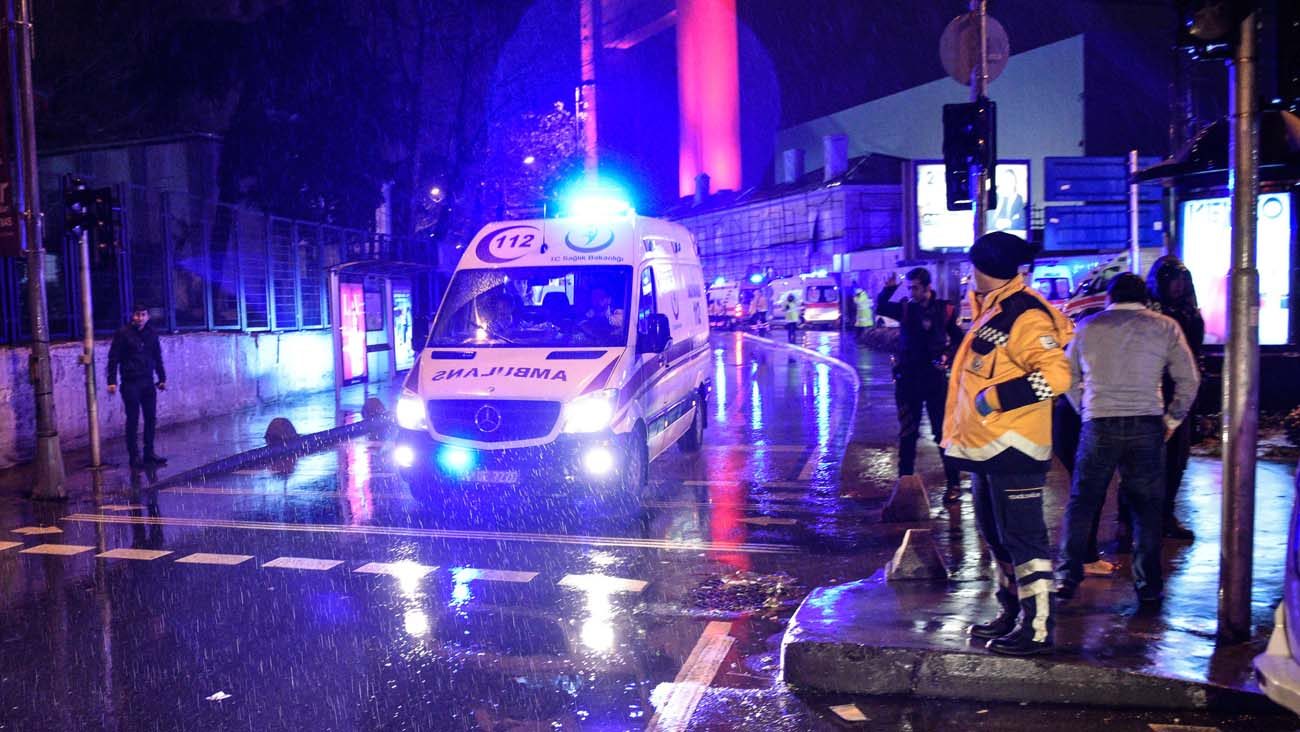 Ambulances transport people wounded during an attack on a New Year's Eve celebration at a popular nightclub in Istanbul. At least 39 people, mostly foreigners, were killed and dozens injured in the attack. (CNS photo/EPA)

“Although we can move around freely, people are understandably afraid of coming to Mass and there’s been a drop in participation,” said Bishop Ruben Tierrablanca Gonzalez, apostolic vicar of Istanbul.

“But all churches have been given police guards since a coup was attempted last July, and security officials have shown great kindness to us. Christians, Muslims and Jews are talking together and sharing the same anxieties, although the future doesn’t depend on us.”

The Mexican-born bishop spoke as a car bomb killed four and wounded 11 outside a courthouse in Izmir, while a police hunt continued for the perpetrator of a Jan. 1 attack on Istanbul’s Reina nightclub, which left 39 dead and at least 70 injured.

In a Jan. 5 interview with Catholic News Service, Bishop Tierrablanca said Turkey’s minority Catholic Church was thankful no resident members had been hurt or killed in the atrocities.

He added that uncertainties had been worsened by the extension of a state of emergency imposed by the government of President Recep Tayyip Erdogan after the July15-16 coup plot, but said he believed this was “not a time to criticize government failures.”

“It’s a difficult moment, and all we can really do is speak out together against terror and in favor of peace; this, rather than any political statement, has to be our message to the Turkish authorities,” said Bishop Tierrablanca, who also heads the exarchate for Turkey’s Byzantine-rite Catholics.

“As participants in this country’s normal life, we have to confront the difficulties and be vigilant, setting aside any antagonisms.”

The Islamic State group claimed responsibility for the nightclub attack in retaliation to Turkish military action in neighboring Syria. Veysi Kaynak, Turkey’s deputy prime minister, said police were closing in on the nightclub gunman after tightening security at airports and border crossings.

Armenian Catholic Archbishop Levon Boghos Zekiyan of Istanbul, president of the Turkish bishops’ conference, said in a Jan. 2 statement terrorism was “a betrayal of the religious calling” and should be answered with “unity in prayer and solidarity, openness and concrete help.”

Earlier, Archbishop Lorenzo Piretto of Izmir, Turkey’s third-largest city, said “many Muslims” had attended a Jan. 1 Mass in Ephesus. The Mass was given police protection, and the archbishop said he believed the Erdogan government had “shown concern for Christian minorities.”

“The war in Syria is right on our borders and the issue of the Kurds is complicating an already uneasy situation,” he told the Rome-based Adnkronos news agency Jan. 2. “But the population here is not radicalized, and everyone opposes (Islamic State) and the fundamentalist terrorists who sow hatred against Christians and Westerners.”

Religious minorities have long complained of being denied rights in Turkey, most of whose 75 million inhabitants are Sunni Muslims. Minorities have faced problems recruiting clergy, establishing associations and obtaining building permits.

During a November 2014 visit, the pope urged greater tolerance for Christians, including the Catholic Church.

However, human rights groups have voiced fresh concerns about human rights and democratic procedures amid mass arrests and job dismissals since the July coup attempt, in which 246 people, mostly civilians, died.

Bishop Tierrablanca told CNS that imams and Muslim community leaders regularly attended Catholic services and took part in interfaith events, adding that he had personally thanked police for helping protect a Jan. 1 Mass at Istanbul’s Cathedral of the Holy Spirit.

He said Catholics in Europe and the United States should help highlight the church’s “many positive achievements” in Turkey, including its ecumenical links, charity work and support for Middle East refugees, rather than “continuously spreading a negative image of the country.”

“Despite its problems, our country is no more dangerous than many others — the challenge is only from a few small groups and individuals,” Bishop Tierrablanca said.

“Since Muslims form the majority here, it’s natural the government is pro-Islam. But this poses no problem and doesn’t prevent Catholics and Muslims from working together.”

NEXT: Maternity leave: Why the pope wants the church to be a loving mother