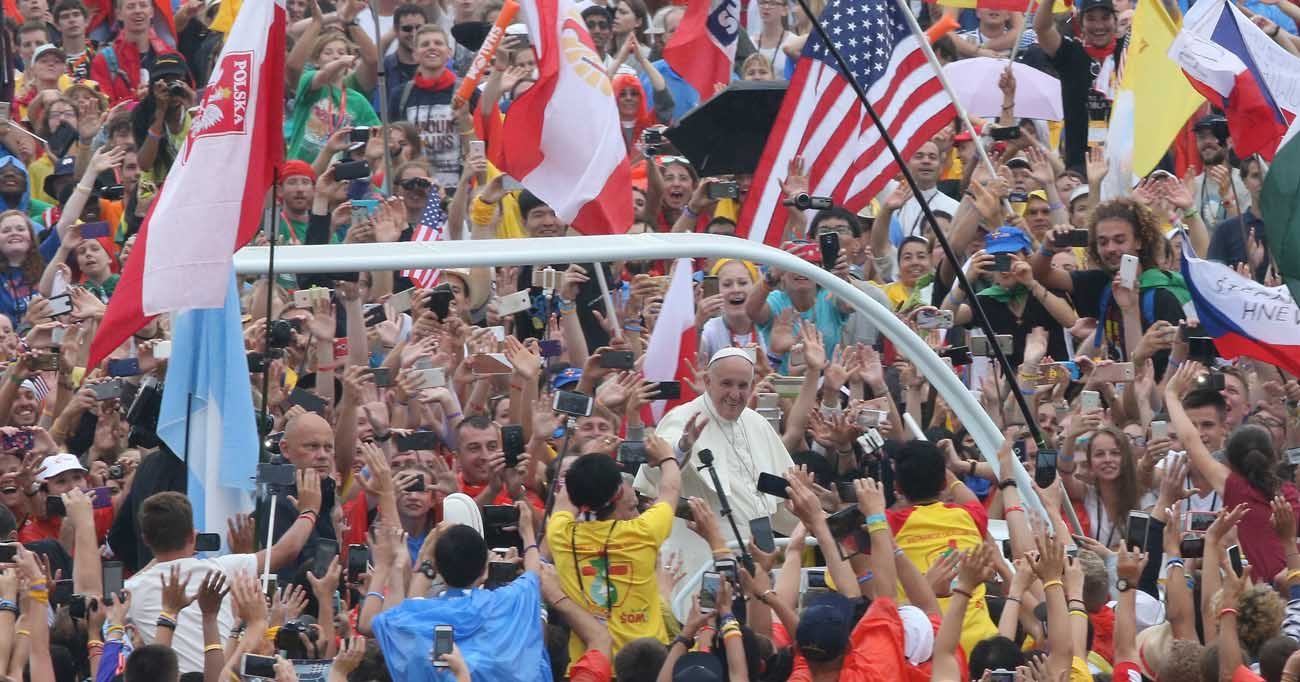 Pope Francis waves as he arrives for a welcoming ceremony during the 2016 World Youth Day at Blonia Park in Krakow, Poland in this file photo. in his message for World Youth Day 2017, the Pope said, "The genuine experience of the church is not like a flash mob, where people agree to meet, do their thing and then go their separate ways."(CNS photo/Bob Roller)

VATICAN CITY (CNS) — Pope Francis asked young people to tell him, their bishops and pastors about their hopes and struggles and even their criticisms.

In preparation for a meeting of the Synod of Bishops focused on youth, the pope wrote a letter to young people, saying the church wants “to listen to your voice, your sensitivities and your faith, even your doubts and your criticism.”

“Make your voice heard,” the pope told young people. “Let it resonate in communities and let it be heard by your shepherds of souls.”

The pope’s letter was released Jan. 13 along with the preparatory document for the synod. The document includes a series of questions to be answered by national conferences of bishops and other church bodies. The responses, along with input from young people themselves, will form the basis of the synod’s working document.

(See the complete text of the preparatory document in English and in Spanish.)

Pope Francis chose “Young people, faith and vocational discernment” as the theme for the synod gathering, which will be held in October 2018.

Young people will have an opportunity to contribute to the working document by submitting reflections “on their expectations and their lives” through a dedicated website — www.sinodogiovani.va — that will be launched March 1, said Bishop Fabio Fabene, undersecretary of the Synod of Bishops.

In his letter, Pope Francis referred to God’s call to Abraham. The Old Testament patriarch, he said, “received a compelling invitation, a challenge, to leave everything and go to a new land. What is this ‘new land’ for us today, if not a more just and friendly society which you, young people, deeply desire and wish to build to the very ends of the earth?”

“A better world can be built also as a result of your efforts, your desire to change and your generosity,” Pope Francis told young people. “Do not be afraid to listen to the Spirit who proposes bold choices; do not delay when your conscience asks you to take risks in following the Master.”

“As bishops, this document will be our compass, too. We pray that it will guide our steps as we walk alongside our young people in preparing for this global conversation. We also pray that youth and young adults across the United States, and those who minister to and with them, will help us more fully understand the experience of young people in our church and in our country — their hopes, dreams, fears and struggles — so that the synod may bear fruit in offering more insight and direction to our ministry with young people.

“May all young people respond generously to the vocation and mission the Lord Jesus is calling them to daily — to take up his cross, and to follow him wherever he invites them.”

The synod preparatory document offered three chapters for reflection by bishops and youths, which it defines as people roughly between the ages of 16 and 29: young people in today’s world; faith, discernment and vocation; and pastoral activity.

Through the synod, the document said, “the church has decided to examine herself on how she can lead young people to recognize and accept the call to the fullness of life and love, and to ask young people to help her in identifying the most effective ways to announce the Good News today.”

The church, it said, needs to evaluate its pastoral approach to young people living in a rapidly changing world where globalization, technological dominance, as well as economic and social hardships pose significant challenges to discovering their vocational path.

“From the vantage point of faith, the situation is seen as a sign of our times, requiring greater listening, respect and dialogue,” the document said.

A special focus of the synod, it said, will be “on vocational discernment, that is, the process by which a person makes fundamental choices, in dialogue with the Lord and listening to the voice of the Spirit, starting with the choice of one’s state in life.”

Specifically for Christians, it said, the question is: “How does a person live the good news of the Gospel and respond to the call which the Lord addresses to all those he encounters, whether through marriage, the ordained ministry or the consecrated life?”

One of the major challenges for young people in defining their personal identity and finding their path in life is the countless options available — particularly when it comes to their careers — that may impede them from making a definitive life choice.

Many young people today, it said, “refuse to continue on a personal journey of life if it means giving up taking different paths in the future: ‘Today I choose this, tomorrow we’ll see.'”

Lack of employment and social and economic hardships, it added, also contribute to “their inability to continue in one career. Generally speaking, these obstacles are even more difficult for young women to overcome,” it added.

Gender inequality and discrimination against ethnic or religious minorities, which can force people to emigrate, are other detrimental factors that the church is called to address to help young people become “agents of change.”

“If society or the Christian community wants to make something new happen again, they have to leave room for new people to take action,” the document said.

By accompanying young people in their personal discernment, it said, “the church accepts her call to collaborate in the joy of young people rather than be tempted to take control of their faith.”

Cardinal Lorenzo Baldisseri, general secretary of the Synod of Bishops, told journalists Jan. 13 that the presence of young men and women at the synod will help bishops understand how best to accompany youths who are searching for their vocation and path in life.

As auditors, young people “will not only be able to take part in the meetings of the general assembly, but also the small working groups,” he said.

Federica Ceci and Elvis Do Ceu, young members of Rome’s St. Thomas More parish, joined the cardinal for the news conference and expressed their gratitude for Pope Francis’ attention to the realities facing today’s young people.

Ceci, a 24-year-old law student, said the synod was a call for young people to “get their hands dirty.”

Do Ceu told reporters, “Pope Francis, in a certain way, helps us understand that that the only way forward is to offer a future — as well as a present — by engaging young people and giving them a leading role.”