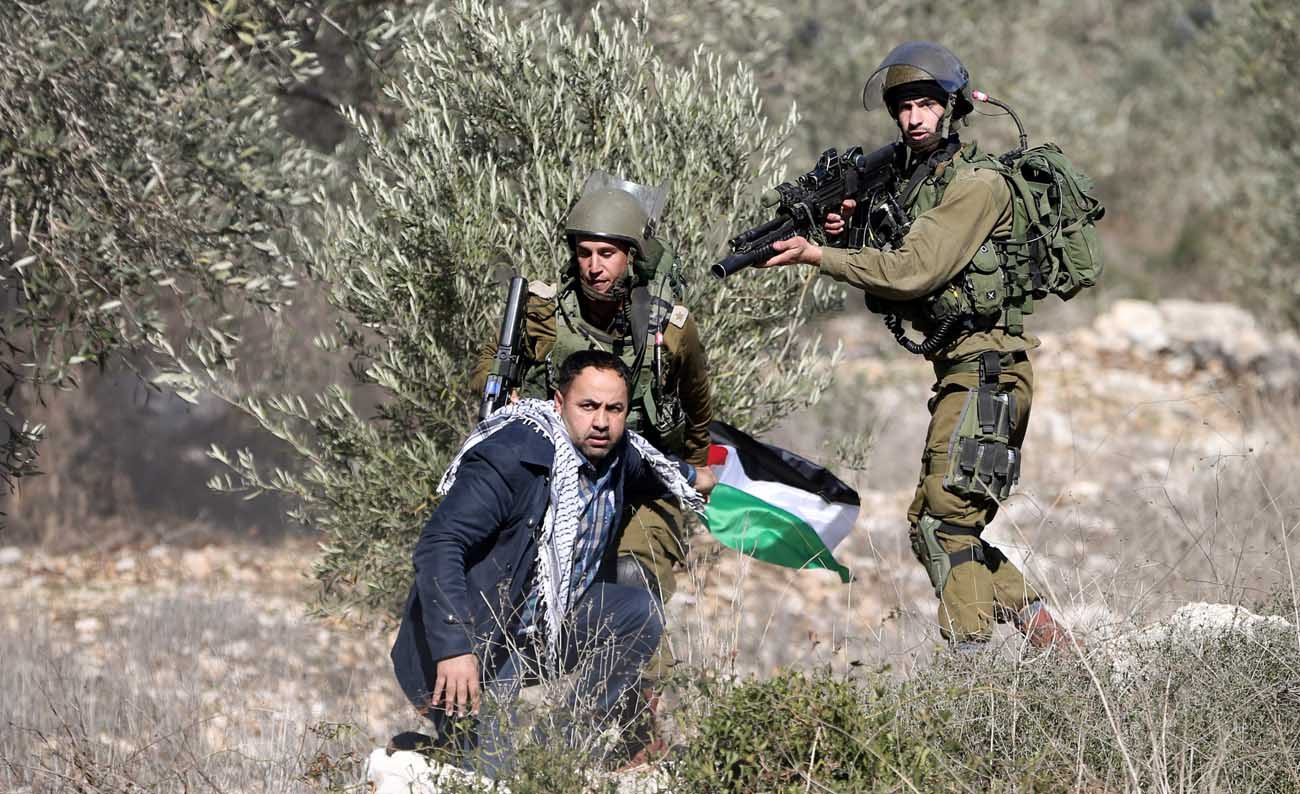 Israeli soldiers detain a Palestinian man during clashes following a protest against the nearby Jewish settlement in the West Bank village of Kafr. The Vatican's hopes for a peace-filled world and its defense of the right to religious freedom have supported its consistent position on the Israeli-Palestinian conflict for 70 years. (CNS photo/Mohamad Torokman, Reuters)

VATICAN CITY (CNS) — The Vatican’s hopes for a peace-filled world and its defense of the right to religious freedom have supported its consistent position on the Israeli-Palestinian conflict for 70 years.

The key concern of the Holy See, and of the Catholic Church as a whole, since the Middle Ages has been for the Christian holy sites and Christian communities present in the Holy Land from the time of Jesus. The vast majority of Christians in the region are Palestinians.

More recently, it has supported the “two-state solution” with independence, recognition and secure borders for both Israel and Palestine.

While support for the two-state system evolved over time, the Vatican consistently has called for a special status for Jerusalem, particularly the Old City, in order to protect and guarantee access to the holy sites of Judaism, Christianity and Islam.

As Archbishop Bernardito Auza, the Vatican’s permanent observer to the United Nations, told the U.N. General Assembly in November: “The Holy See views the holy city of Jerusalem as the spiritual patrimony of the three monotheistic religions of Judaism, Christianity and Islam.”

The internationally unsettled status of Jerusalem and its central importance to Jews, Muslims and Christians explains why, while recognizing the state of Israel, no nation has its embassy in the holy city.

Before his inauguration, President-elect Donald Trump said he would move the U.S. embassy to Jerusalem from Tel Aviv. Former presidents Bill Clinton and George W. Bush said the same thing during their campaigns for election, although once in office, they did not carry through with the move, citing its potential negative impact on Israeli-Palestinian peace talks.

Some observers think Trump is more serious about having the embassy in Jerusalem.

“At this point we are in a wait-and-see pattern,” said Bishop Oscar Cantu of Las Cruces, New Mexico, who was in Jerusalem in mid-January together with 12 other bishops from North America and Europe.

Bishop Cantu, chairman of the U.S. bishops’ Committee on International Justice and Peace, told Catholic News Service that Trump’s promise to move the U.S. embassy to Jerusalem poses a “serious problem” to any possible two-state solution to the Israeli-Palestinian conflict.

“We are hoping that other, clearer minds will convince the president-elect to change his mind,” he said, promising the U.S. bishops would engage with the new administration in “as friendly a way as possible.”

One of the Vatican’s earliest mentions of the Palestinians’ right to a homeland came in a communique issued by the Vatican press office when St. John Paul II held his first meeting with Palestine Liberation Organization Chairman Yasser Arafat in 1982.

The statement said the pope had expressed his hope to Arafat that “a just and lasting solution to the Middle East conflict would be reached as quickly as possible, a solution which, by excluding recourse to arms and violence — in any form, and especially that of terrorism and reprisal — would lead to the recognition of the right of all peoples, and in particular the Palestinian people, to possess a land of their own, and that of the Israeli people to ensure their own security.”

Hopes and prayers for peace and an encouragement for dialogue to resolve the ongoing dispute have been a centerpiece of papal pronouncements about the Holy Land for more than half a century.

Almost every Christmas and Easter, popes have renewed their pleas for Israelis and Palestinians — with the support of the international community — to commit themselves to dialogue for their sake and the sake of peace throughout the region.

Pope Francis has followed in his predecessors’ footsteps. In his 2016 Christmas address, he prayed, “May Israelis and Palestinians have the courage and determination to write a new page of history, where hate and revenge give way to the will to build together a future of mutual understanding and harmony.”

NEXT: Pope: Catholics, Lutherans must continue to seek common ground