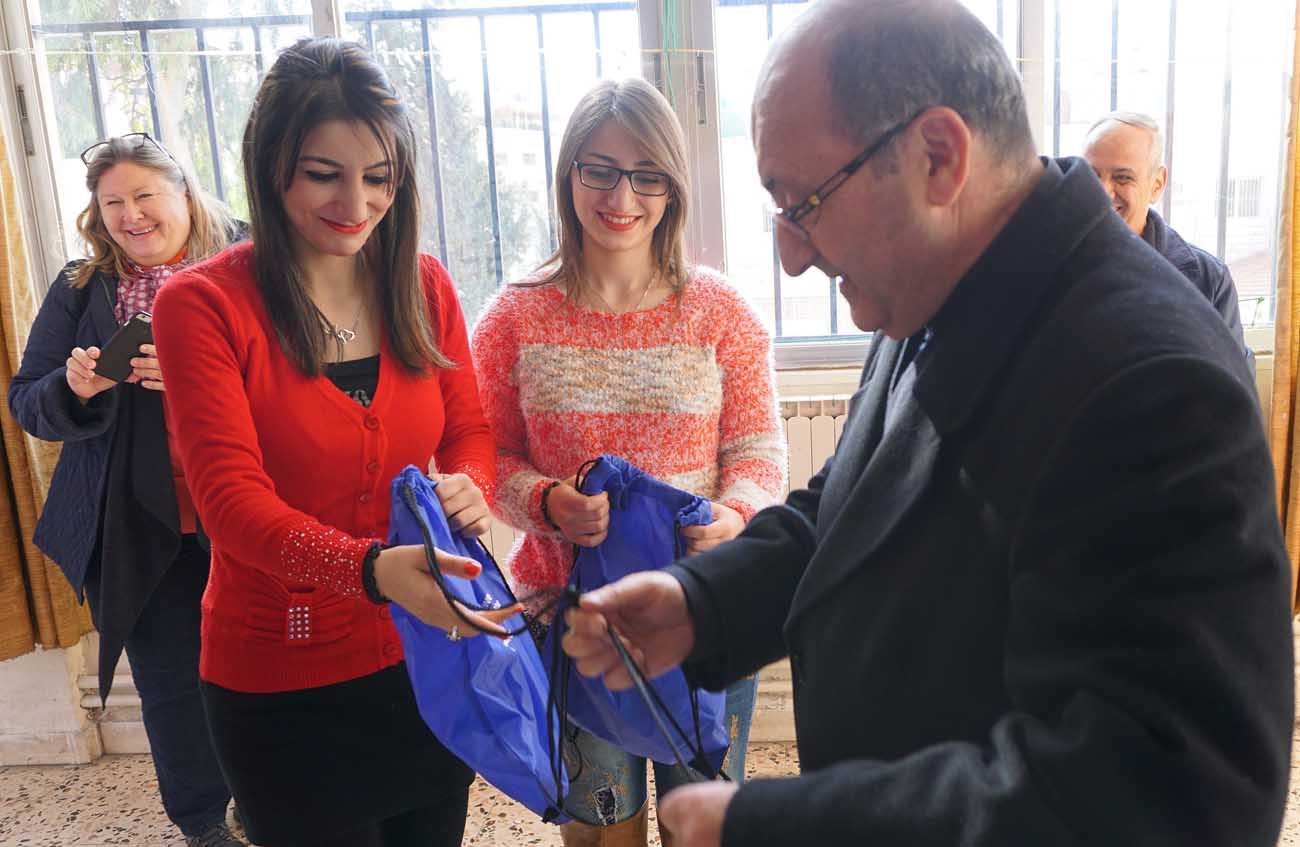 Father Khalil Jaar distributes hygiene packs to Iraqi Christian refugees sheltering at his church compound Jan. 8 in Marka, Jordan. Many Iraqi Christian refugees who fled Mosul say they will not be able to return, even after the so-called Islamic State militants are flushed out of the area by the U.S.-led and Iraqi government forces. (CNS photo/Dale Gavlak)

MARKA, Jordan (CNS) — Working with displaced Iraqi Christians has stretched and strengthened the faith of a priest who came to Jordan as a refugee.

Father Khalil Jaar said the Iraqi Christians, who escaped the Islamic State invasion for initial sanctuary in Jordan until they find a permanent home, have become like family for him, with some even living on the compound of his parish, Our Lady Mother of the Church, in this crowded suburb of the Jordanian capital, Amman.

Some Iraqi Christians helped by Father Jaar told him that despite gains by the U.S.-led coalition pushing Islamic States militants from their villages and Mosul, they cannot think of returning home and are tired of repeatedly rebuilding their lives.

“They went from Baghdad to Alqosh and other places inside Iraq they thought were safe. Then they were forced to escape to Irbil and from there to Jordan,” he said.

Now, as they are asked to return to Iraq, the priest said: “They have lost all hope of cooperating with their people. They are looking for a new life, both for themselves and their children.”

Two-and-a-half years ago, concerned for the refugee children’s future and education, Father Jaar set up a school with a recognized curriculum on the church compound. It currently educates more than 200 refugee pupils, providing a meal, uniforms, books as well as food coupons to families who have used up the last of their funds as their displacement drags on. Christian formation and English language instruction are provided. A number of the teachers and other staff are Iraqi Christian refugees.

But the loss of a major donor due to unforeseen circumstances recently put the future of the school in jeopardy. The school requires about $25,000 to 30,000 per month to operate.

“We are looking to the Lord for help. I trust him. Some weeks ago, I discussed the possibility of having to close the school with its principle, Sana’a Bekki. I told her please give me two days to pray,” Father Jaar said. “Then we received a short email from a friend saying: ‘Father, go ahead for this month, I will provide for January.'”

“The Lord sent us the exact amount of money needed to protect this school for this month and not a penny extra. He wants us to keep our faith in providence,” the priest said, acknowledging that his faith, too, is being stretched and strengthened serving the refugees.

Father Jaar said the refugees’ devotion to their Christian faith has transformed his life and challenged his own spiritual walk.

An Iraqi Christian family that fled the Islamic State in Mosul shares a space cordoned off with curtains with other like families on an upper floor of the compound. Two of the older daughters help with the school’s administration, while the younger children attend the school.

“We have clung to our Christian faith despite all the hardships we have suffered since escaping from Mosul,” Um Rita told CNS, using her Arabic familial name, which means Rita’s mother.

“At the time of escape, the militants stopped us, abducted, and held my husband for several hours. They ransacked the car, searching through suitcases, even my purse. But miraculously they never spotted my rosary, and it never fell out of my handbag,” she said, displaying the delicate crystal beads with silver cross.

“I prayed fervently the entire time he (husband) was gone and he returned safely to us,” Um Rita said. “I don’t know how on earth he came out. It’s God! He came through for us in a remarkable, miraculous way. The Lord keeps protecting every one of us.”

“Our faith has increased because we saw the Lord standing with us,” her husband said, adding that the family hopes to resettle in Australia, given the chance.

Father Jaar said he often says of the Iraqi refugees, “Happy is the country which will receive these people because they are very well qualified and educated.”

“We hope that U.S. President-elect (Donald)Trump will give some new hope for these Christians, because really they are suffering too much, especially when they feel forgotten and persecuted,” the priest said in reference to the preference given by the U.S. and other countries to resettle Syrian refugees rather than Iraqi Christians.

Recognizing Father Jaar’s work, Pope Francis has commissioned him to travel to other countries to share stories of the plight of Christians caught in the crosshairs of Mideast conflicts and Islamist extremists with a call to stand beside the Christians and provide help in their hour of need.

A priest of Palestinian origin, Father Jaar said he and his family, too, were once refugees from Bethlehem.

The priest recounted a recent visit by the apostolic administrator of the Latin Patriarchate of Jerusalem, Archbishop Pierbattista Pizzaballa, who encouraged him to give his all to the refugees, despite the challenges.

The archbishop “spent two hours with us,” said Father Jaar. “He told me, ‘Father carry on. This is the work of the church.’ And that’s exactly why we do what we do and go ahead. “