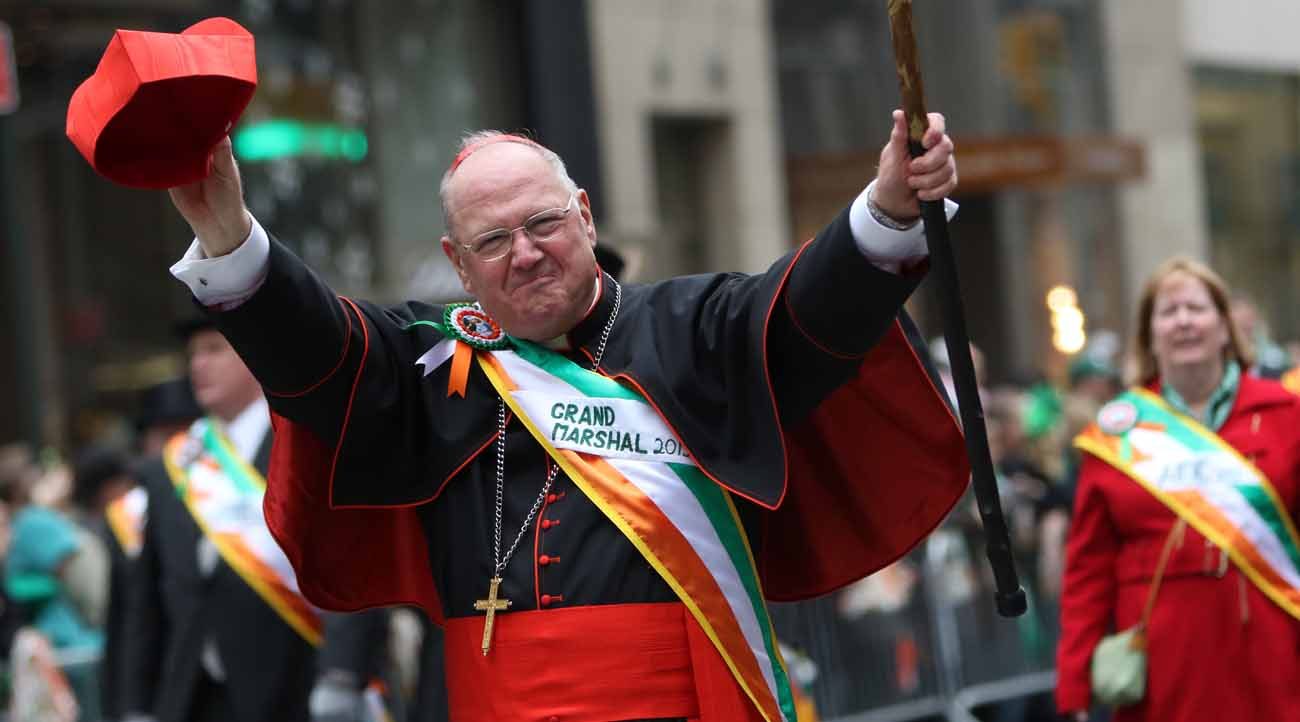 New York Cardinal Timothy M. Dolan waves to the crowd while serving as grand marshal of the St. Patrick's Day Parade in New York City in 2015. When St. Patrick's Day falls on a Friday, as it does this year and about every seven years, the Lenten rule requiring Catholics to abstain from meat on Fridays collides with the long-held holiday tradition of eating corned beef and cabbage. (CNS photo/Gregory A. Shemitz)

WASHINGTON (CNS) — When St. Patrick’s Day falls on a Friday, as it does about every seven years, the Lenten rule requiring Catholics to abstain from meat on Fridays collides with the long-held tradition of eating corned beef and cabbage.

The two occasions meet this year. March 17 marks the celebration of St. Patrick — known as the Apostle of Ireland for his years of missionary work there — and it also is a celebration of all things Irish and even green. This March 17, since it falls on a Friday in Lenten, also is a time of penitence.

The timing has not gone unnoticed by some U.S. bishops. Before Lent even started, many of them issued dispensations for Catholics in their dioceses allowing them to eat meat on St. Patrick’s Day.

The dispensation does not take Catholics totally off the hook. Many bishops advised Catholics over age 14, who are required to abstain from meat on Friday, to do an extra act of charity or penance in exchange for eating meat.

Bishop Robert C. Morlino of Madison, Wisconsin, took it a step further. In a statement, he said Catholics should also “exercise due moderation and temperance in festivities and celebrations of the memorial of St. Patrick, in keeping with the solemnity and honor that is due to so great a saint and his tireless efforts to inspire holiness in the Christian faithful.”

He tempered that by also saying the day should “foster a joyful and reverent devotion to that great saint” and should also “honor the patrimony of the Irish people to whom he first preached the good news of salvation.”

The bishops primarily announced the one-day lifting of the church rule in statements posted on their diocesan websites.

Omaha Archbishop George J. Lucas granted a dispensation from the meat observance but those who eat meat on St. Patrick’s Day must abstain the next day, March 18.

New York Cardinal Timothy M. Dolan sent archdiocesan pastors a letter in late January notifying them of the dispensation and asking them to let their parishioners know about it.

Milwaukee Archbishop Jerome E. Listecki noted that abstaining from meat on Fridays in Lent is an “important dimension of the penitential nature of the season,” but he said Catholics in the archdiocese that day would not be required to give up meat “given the many celebrations that occur on this day,” which in the archdiocese also includes the ordination of two auxiliary bishops that afternoon.

Catholics in the Archdiocese of St. Paul and Minneapolis received a letter in late February from Susan Mulheron, chancellor of canonical affairs, saying the dispensation for St. Patrick’s Day had been issued by Archbishop Bernard A. Hebda after consulting archdiocesan leaders.

She said the archbishop considered past practice and present circumstances and decided the dispensation “would serve the common spiritual good.”

“As a general rule, a request for a dispensation from the obligation of abstinence on Fridays of Lent will not be considered unless some serious reason is present,” she wrote, adding that St. Patrick’s Day has “traditionally been an occasion for joy-filled celebrations in this archdiocese.”

Archbishop Hebda hinted he might grant the dispensation when he spoke at a Theology on Tap gathering Feb. 8 in St. Paul. When someone in the crowd asked him about the possibility of eating meat on St. Patrick’s Day, the archbishop asked for a show of hands of those who wanted to eat corned beef to honor St. Patrick.

“When you get a dispensation — and I think it’s coming — you should do penance on another occasion,” he told the crowd. “So, it’s like a get-out-of-jail-free card, but you have to pay sometime.”

NEXT: With Lilly grant, seminary will help parishes reach out to young adults