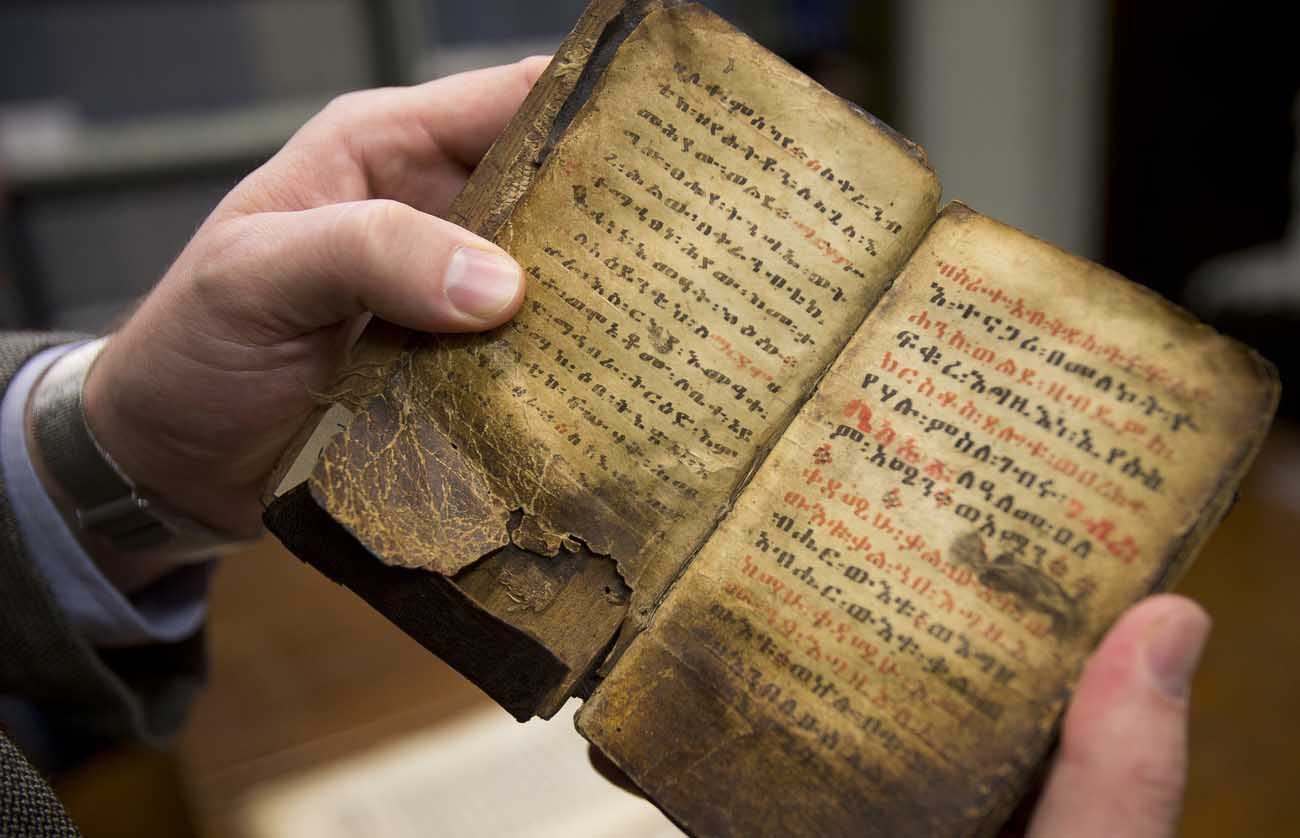 Aaron M. Butts, assistant professor of Semitic languages and literature at The Catholic University of America in Washington holds an Ethiopic manuscript containing the Gospel of John at Mullen Library Jan. 25. The university is the holder of the fifth largest collection of Ethiopian Christian manuscripts in the United States and the largest collection of Ethiopian Islamic manuscripts outside Ethiopia. (CNS photo/Tyler Orsburn)

WASHINGTON (CNS) — A massive donation of Ethiopian religious manuscripts to The Catholic University of America in Washington makes the school one of the largest holders of such texts outside Ethiopia.

The value of the donation, by Gerald and Barbara Weiner of Chicago, is estimated to be more than $1 million. The collection includes more than 215 Islamic manuscripts, 125 Christian manuscripts, and 350 so-called “magic” scrolls with prayers to protect the owner or reader from particular illnesses.

What makes the manuscripts valuable is that they’re handmade, according to Aaron Butts, an assistant professor of Semitic languages and literature at Catholic University. What makes them rare, he added, is that such texts are rarely seen outside Ethiopia, and that the East African nation’s rainy season often renders the books and scrolls unusable or illegible after repeated use. That so many texts — most of which date back to the 18th and 19th centuries, with a few even older — still survive, and in a usable condition, he told Catholic News Service, is “amazing.”

“Every one of them is a treasure,” Butts said.

Although modern bookbinding techniques exist in Ethiopia, the nation’s religious leaders still greatly prefer to use handmade books. Their makers use the skins of sheep, goats and cattle to make the books; even the “parchment” pages come from these animal hides.

Each book’s contents also must be written by hand with ink. Frequently, there are illustrations in the books — and definitely on the scrolls — making the production of even one book a prolonged and relatively costly venture. 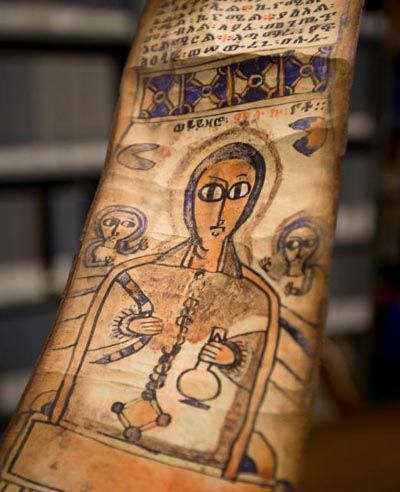 An Ethiopic prayer scroll, commonly known as a “magic” scroll, is seen at Mullen Library on the campus of The Catholic University of America in Washington Jan. 25.  (CNS photo/Tyler Orsburn)

Butts explained that the scrolls are not regarded as official prayer texts by Ethiopian Christian leaders, “but the people who use them use them as prayers.” The prayers ask for divine help for any number of maladies, headaches among them, he said, but some focus on pains only experienced by women, such as they experience with menstruation and childbirth. “This may be why religious leaders have not thought of them as official,” he added.

The edges of some pages of the books are so dark they look like they had been burned. Rather, Butts said, “it’s dirt from the hands” of the user. Some books have “illuminated” illustrations that display their brilliance despite the passage of time, and contain writing underneath the illustration legible to a sharp reader.

Included in the donation were a trio of Ethiopian Christian liturgical texts featuring Gospel passages on one page, and homilies from saints on the next. The tomes are massive in size, each likely containing 200 or so pages with generous margins bordering each page “as a symbol of the wealth” of the religious figure who commissioned the three-volume set, Butts said, adding “Imagine how many animals, how much ink was used” to complete the set, with the writing of each book taking at least several months to complete.

Butts told CNS that the Weiners wanted to make sure the recipient of the gift would be able to provide access to the collection. Catholic University will be able to provide not only scholars and students with access, but also Washington’s Ethiopian-American community.

The Washington area is rivaled only by the much larger Los Angeles metropolitan area for the size of its Ethiopian community. There is a particular concentration of Ethiopian restaurants and shops — including an Ethiopian evangelical church — along the border of Washington with the suburb of Silver Spring, Maryland, and many Ethiopian-American men make their living as taxi drivers.

The donated books and scrolls are still being assessed for their relative durability after two or three centuries. When the assessment is complete, which Butts hopes will be sometime in the spring, Catholic University will invite the Weiners to attend a reception marking the donation.

NEXT: Arizona mother deported from U.S. taken in by shelter just across border