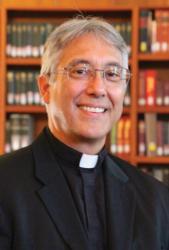 SAN FRANCISCO (CNS) — San Francisco Archbishop Salvatore J. Cordileone has appointed a bilingual and eclectic Jesuit theologian and social ethicist who is well respected as a spiritual director of seminarians as the new president-rector of St. Patrick Seminary & University at what is a critical juncture for the 118-year-old West Coast seminary.

The appointment of Jesuit Father George E. Schultze, announced by the archdiocese Feb. 16 and effective July 1, marks a “major turning point” for the seminary as the Sulpicians, who held a teaching and administrative role at the seminary since its founding in 1898, will depart at the end of this school year, said Sulpician Father Gerald Coleman, who was president rector from 1988 to 2004.

“I was very happy to hear about the choice of Father Schultze as rector,” Father Coleman told Catholic San Francisco, the archdiocesan seminary.

“He’s well respected, not just in the seminary but outside the seminary,” Father Coleman said. “As the seminary moves forward it is obviously going to have to develop its own traditions. Having been there, he knows that tradition and he knows the positive points about the Sulpicians’ traditions: how one relates to students, to faculty.”

The archbishop also appointed a diocesan priest, Father Daniel Donohoo, as vice rector. Father Donohoo is a graduate of the seminary and has been on its faculty since 2013. He is currently dean of men.

The seminary is experiencing low enrollment, a situation exacerbated by San Jose Bishop Patrick J. McGrath’s announcement in a Feb. 10 letter to his priests announcing he had decided to transfer current and future seminarians to the University of St. Mary of the Lake/Mundelein Seminary of the Archdiocese of Chicago in the next school year. About nine seminarians will be affected.

Father Schultze, who did not formally apply for the post, said he is experiencing “no trepidation, no anxiousness.” He plans to work with seminary consultors but expects to begin visiting bishops to talk with them about sending their seminarians to St. Patrick’s next year. He said the faculty, despite losing six Sulpician faculty and administrators, is already mostly replaced with excellent professors for next year.

Bishop Thomas A. Daly of Spokane, Washington, who led the national search that selected Father Schultze, said he has already committed to sending his seminarians to St. Patrick’s and two are already enrolled. The bishop was the seminary’s president-rector from 2013 to 2014.

Father Schultze, who speaks English and Spanish, has served as a spiritual director and adjunct faculty at the seminary since 2005 and prior to that was assistant professor of social ethics at University of San Francisco, 1998-2004.

He has a doctorate in social ethics from the Department of Religion at University of Southern California, a masters of divinity in theology from the Jesuit School of Theology at Berkeley. He earned a master’s in business administration at University of California Berkeley, and a bachelor’s of science in industrial and labor relations at Cornell University.

“His simplicity of life is an example of the priestly identity Pope Francis believes is necessary in the forming of priests for the times,” wrote Bishop Daly in a letter to the search committee which included retired San Francisco Archbishop George H. Niederauer, Oakland Bishop Michael C. Barber and Los Angeles Auxiliary Bishop Robert E. Barron.

Father Schultze “is a man with great compassion. He is a gentle soul. He is very humble,” Bishop Daly told Catholic San Francisco, who worked directly with Father Schultze during his time as interim president-rector 2013-14. “What the seminary needs now is a strong spiritual father and that’s George.”

“I’m so supportive of the archbishop and his work which I think is clearly for the good and the support of the faithful and for those who are searching and looking,” Father Schultze said. “That’s our bottom line here. We want to bring people closer to Our Lord.”

Father Schultze has written on Catholic social doctrine and work life, addressing some of those issues in “Strangers in a Foreign Land: The Organizing of Catholic Latinos in the United States,” published by Lexington Press in 2006.

“The life issues and the social issues cannot be separated,” said Father Schultze, who trained as a community organizer and serves as adviser for the faith-based farm cooperative NanoFarms and Catholics for the Common Good, an organization formed to defend marriage between one man and one woman. He noted he prays outside Planned Parenthood’s clinic with 40 Days for Life and attends Walk for Life West Coast.

“When we as Catholics only raise up one side of that whole, we are making a mistake. It is both-and. The life issues are fundamental because there is no need for organizing unless a person has life but the organizing is important because life not simply birth or death, but everything in between,” Father Schultze said.

Father Schultze, who grew up in San Jose area when it was part of the Archdiocese of San Francisco, was taught religion by a Sulpician while at St. Francis High School, he said. He stressed his good relationship and respect for the Sulpicians.

He was raised in a household with a “sensitivity to Hispanic culture” he said, and although his grandmother only spoke Spanish, English is his first language. His parents were both union members. His father was a member of Operating Engineers Local 3 and his mother belonged to General Warehouse and Food Processors Union Local 644 of the Teamsters.

“Father Schultze exudes love for the seminarians, rejoices in the quality of men entering the seminary, and expresses great confidence in the future of the church,” said Bill May of Catholics for the Common Good. “He also has a unique appreciation of the importance of Church social teaching in priestly formation for the new evangelization.”