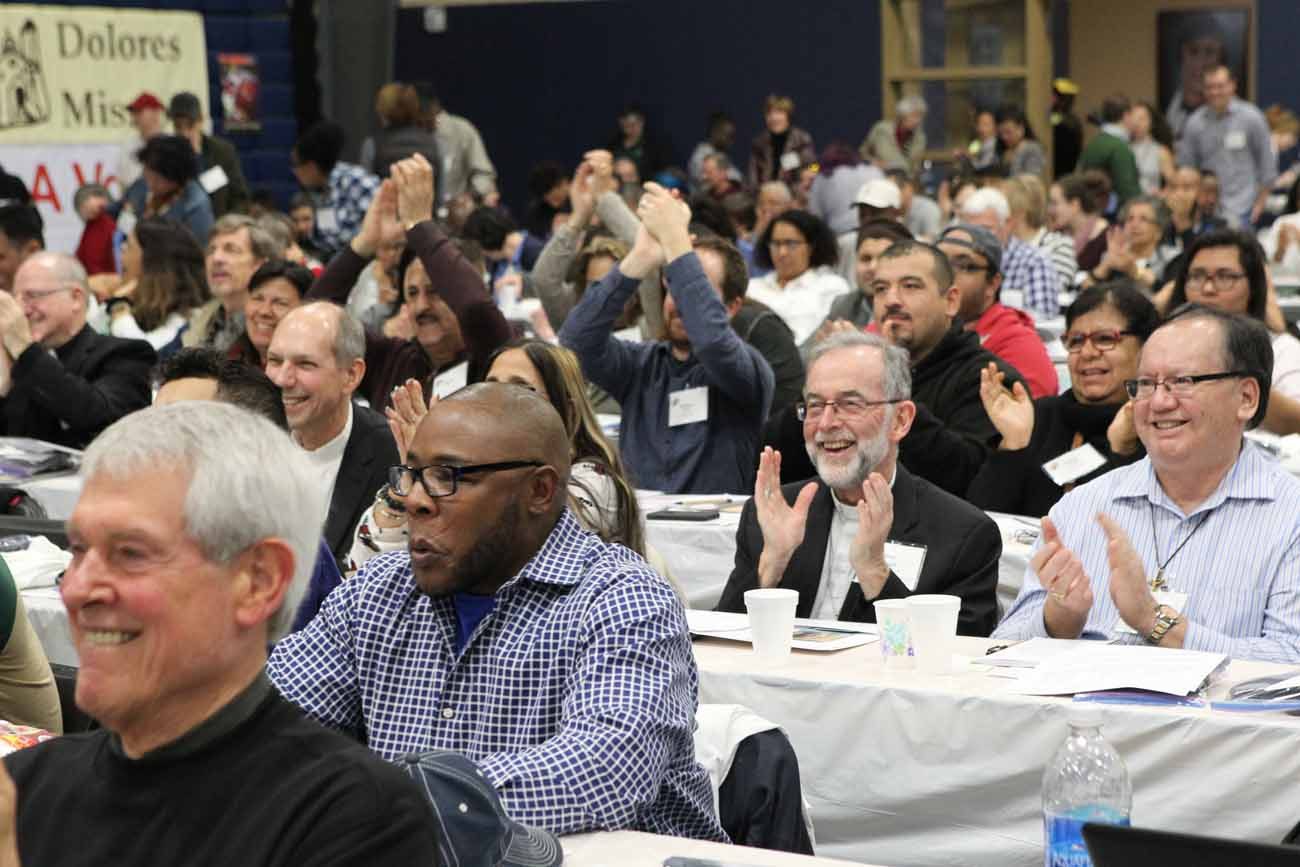 MODESTO, Calif. (CNS) — Pope Francis congratulated more than 600 representatives of grass-roots organizations for responding with mercy to society’s hurting people during the opening of the four-day U.S. regional World Meeting of Popular Movements.

In a letter to the assembly Feb. 16 read alternately in English and in Spanish, the pope said the work of the organizations and the people involved “make your communities thrive.”

The pope expressed hope that “such constructive energy would spread to all dioceses because it builds bridges between peoples and individuals. These are bridges that can overcome the walls of exclusion, indifference, racism and intolerance.”

The message earned applause at points throughout its delivery, especially when the pope reiterated that “no people is criminal and no religion is terrorist and as he encouraged people to “defend creation” in the face of “disturbing warming of the climatic system.”

He encouraged people to confront terror with love in the interest of peace.

Pope Francis’ interest in promoting the work of grass-roots organizations can be traced to his time as cardinal in Buenos Aires, Argentina, when he often visited priest friends, struggling families and low-paid workers in poor neighborhoods spread across the city. Since 2014, three international World Meetings of Popular Movements have been held — two in Rome and one in Bolivia — to give people working to make life better for marginalized communities.

The pope’s letter also cited the biblical good Samaritan as an example of someone who responded with mercy to a man, robbed and beaten, in dire need of help when others chose to ignore him. He said the Catholic Church along with “the Christian community, people of compassion and solidarity, social organizations” are those whom Jesus entrusts those who are afflicted in body and spirit.”

The work of grass-roots groups coming together is vital to helping people overcome social injuries brought on by an “economic system that has the god of money at its center,” the pope’s letter said.

“Globalized society frequently looks the other way with the pretense of innocence,” the pope wrote. “Under the guise of what is politically correct or ideologically fashionable, one looks at those who suffer without touching them. But they are televised live; they are talked about in euphemisms and with apparent tolerance, but nothing is done systematically to heal the social wounds or to confront the structures that leave so many brothers and sisters by the wayside. This hypocritical attitude, so different from that of the Samaritan, manifests an absence of true commitment to humanity.”

Jesus encouraged people not to “classify others in order to see who is a neighbor and who is not,” Pope Francis continued. “You can become neighbor to whomever you meet in need and you will do so if you have compassion in your heart. That is to say, if you have that capacity to suffer with someone else. You must become a Samaritan.”

Topics related to housing, labor, land and the environment, migration and racism were on the agenda for the meeting sponsored by the dicastery, the Catholic Campaign for Human Development and the PICO National Network of faith-based organizing groups.

In comments after reading the pope’s letter, Cardinal Turkson commented that the topics were chosen months before the outcome of the U.S. election for president in November. Without mentioning the name of President Donald Trump, he said the gathering was not meant to criticize any particular office holder “and the fact that things happened the way they happened is just a coincidence.”

“Pope Francis wants us to recognize the structure that create exclusion in society,” the cardinal explained.

The pope also wants people to understand that “we are the protagonists of change … that we are actors in this. We are not simply passive objects waiting for things to happen to us.”

Bishop Stephen E. Blaire of Stockton, California, said while introducing Cardinal Turkson that the gathering would discuss “transforming the world in which we live in light of our faith tradition in God. We are here because we want to be with the poor, the migrant, the workers, the homeless and with those who are excluded.”

As the meeting began, the Rev. Trena Turner, who works alongside her husband at the nondenominational Victory in Praise Church in Stockton and is a leader in the community group Faith in the Valley, told the audience that 25 people who originally planned to attend the meeting decided not to risk traveling to Modesto. She said they feared being arrested and deported under the federal government enforcement efforts against undocumented people.

As she called each person’s first name, the crowd shouted “Presente!” to recognize their participation.

Modesto was chosen for the papal-inspired meeting because of its location in California’s fertile Central Valley, where on a daily basis people confront each of the topics to be addressed at the gathering — land, labor, lodging, racism and migration.