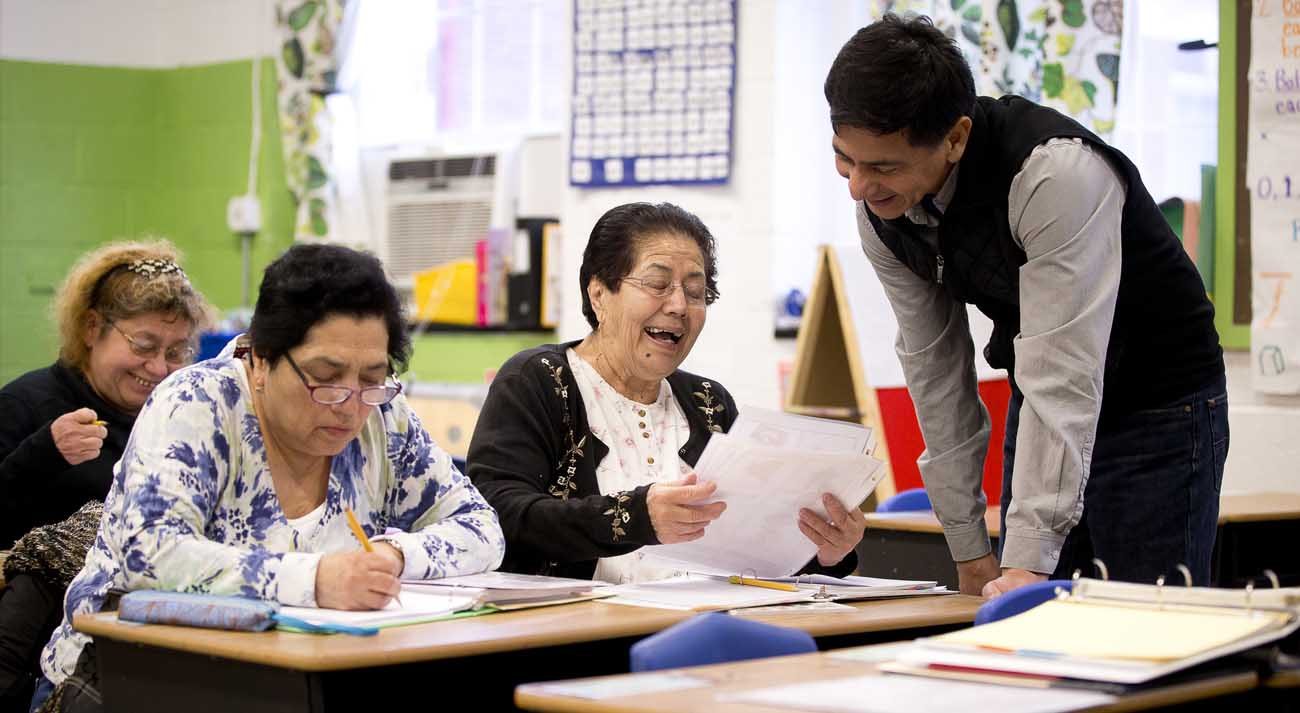 WASHINGTON (CNS) — Mario Gamboa is on the move. There are too many words to read, and too few Latinos who can read them.

His first stop, the Guatemala consulate in Silver Spring, Maryland. His second visit, a Spanish AM radio station across town in Wheaton, Maryland. Last stop, another consulate, but this time in Washington with El Salvador’s diplomat.

The conversation of the day: A Spanish literacy center colloquially known in Spanish as CENAES, or El Centro de Alfabetizacion en Espanol.

“I first got the idea to help migrants read and write Spanish in 2003,” the Peruvian said from his office at Our Lady Queen of the Americas Catholic Church in Washington.

“I own a small lawn and house painting business. One day I left written instructions in the morning for two men to complete, and when I returned later that evening, nothing had been done. They told me they were very sorry but that they couldn’t read or write.”

From there it was full-steam ahead — letters, syllables, words and basic math. Gamboa offered to teach the men, and their friends, basic Spanish literacy from his basement apartment.

“I started with eight students, but after I made a class announcement during Mass at Our Lady Queen of the Americas, enrollment jumped to 35 in 2004,” the self-taught language instructor told Catholic News Service. “In 2005, I had 70 students. And in 2006, I had around 80.”

Since 2003, Gamboa said, more than 600 adults have graduated from the three-year curriculum and many have moved on to learn English and computers and even obtained their GED. “They can help their children with homework now,” he said.

Flor Umanzor, a volunteer teacher for more than 10 years at the Shrine of the Sacred Heart in Washington, said she can see the satisfaction on her students’ faces when they read and understand a passage from the Bible.

“The (literacy program) helps them to develop their self-esteem,” the Salvadoran native said. “And cultivates their relationship with their children, and helps them with their livelihood.”

Gamboa reports 70 percent of his students come from El Salvador. The 12-year civil war devoured the 1980s, and left many children hiding from school, he said.

“We must try and forget a little bit of the past and grab the present,” Gamboa said. “(Today) life isn’t just about work, but education.”

For Maria Carpio, a civil war might have been easier.

The Salvadoran native and Washington resident told CNS that her mother died when she was a baby, and that her father dropped her off at her godparents’ house when she was just 4 years old, never to be seen or heard of again.

“My godmother beat me with whatever she could find, and by the grace of God, I ran away (within the year),” she said as a tear rolled down her left cheek.

For a year and a half, the 4-year-old orphan lived in and off the streets, hopping buses and eating out of garbage cans, making her way from the Honduran border to San Salvador, her country’s capital.

Four years later, Carpio said she made it to San Bernardino, California, as an 8-year-old, by herself and with only $50 in her pocket.

By the grace of God and survival of the fittest, the now-retired office cleaner and legal U.S. resident since 1987, lives to see and share another day.

“When one doesn’t know how to read, one feels scared of everything,” Carpio said from her basement apartment near Howard University. “That (the police) might send you back to your country, or many other things. Now I try to help people. When I meet people at the bus stop, I ask them if they know of anyone who can’t read. It’s the least I can do to contribute and give thanks to God.”

“I love the literacy program (at our church),” said Capuchin Franciscan Father Moises Villalta, pastor of the Shrine of the Sacred Heart in Washington. “I’m 100 percent with it. We must clothe the naked; feed the hungry, visit the sick and welcome the stranger. Matthew 25:42 — there’s no way to get lost or confused.”