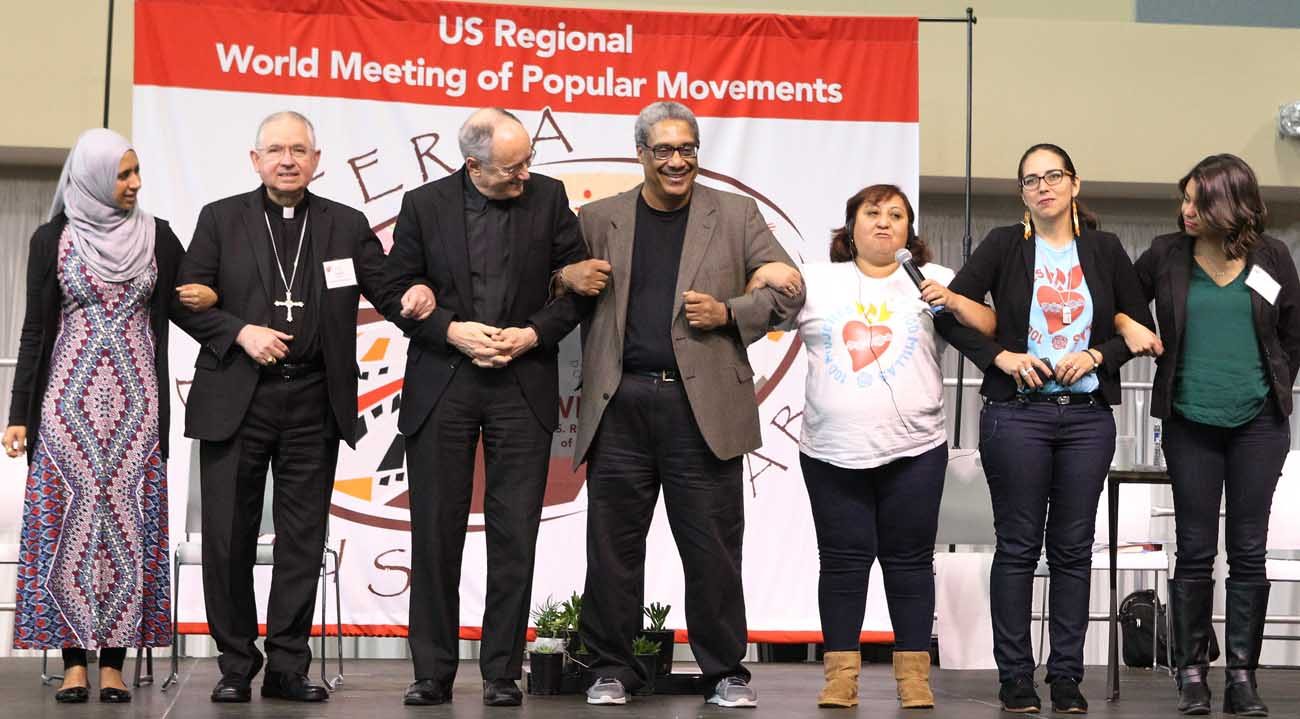 Los Angeles Archbishop Jose H. Gomez, second from left, links arms with other participants on stage after a panel discussion on migration issues Feb. 17 during the U.S. Regional World Meeting of Popular Movements in Modesto, Calif. The archbishop said fear has spread among unauthorized immigrants in the U.S. as the government cracks down on illegal immigration. (CNS photo/Dennis Sadowski)

MODESTO, Calif. (CNS) — The push for sanctuary was on a lot of minds at the U.S. Regional World Meeting of Popular Movements.

Concerns about President Donald Trump’s intention to deport millions of unauthorized immigrants rose throughout the Feb. 16-19 gathering of more than 600 grass-roots and church leaders in California’s Central Valley.

Declaring sanctuary for people fearing forced removal and the breakup of family life was one way to resist government actions, activists and Catholic clergy said.

Auxiliary Bishop Edward M. Deliman of Philadelphia, who also is pastor of St. Charles Borromeo Parish in suburban Bensalem, received a standing ovation when he told the gathering Feb. 18 that “what would be disruptive would be if we would declare our parish a sanctuary church.”

“If that would spread and every parish in the diocese would do the same, we certainly could do what Jesus would want us to do,” said Bishop Deliman, who has ministered alongside Latinos in the archdiocese for most of the 44 years of his priesthood.

Afterward, the bishop told Catholic News Service that offering sanctuary at the parish is being considered and that he planned to discuss the idea with Philadelphia Archbishop Charles J. Chaput.

Representatives of community and church organizations working with unauthorized immigrants reported throughout the meeting that they have seen a rising level of fear and uncertainty among Latinos since Trump took office Jan. 20 and started to make good on campaign pledges to crack down on people in the country illegally.

In the government’s most recent action, the Department of Homeland Security Feb. 21 outlined guidelines that White House officials said would enhance enforcement of immigration laws inside the country as well as prevent additional unauthorized immigration.

Meeting participants blamed the institutionalization of racism and the widening acceptance of demonizing “the other,” people who are not part of the dominant American culture, for the backlash at brown and black-skinned people including Muslims.

Ingrid Vaca, of Dreamers Moms USA International, implored participants throughout the meeting to step up to protect all people being targeted for deportation and who may be on the receiving end of unwanted racial epithets.

“Now more than ever we need to work in unity and scream and shout in unity,” Vaca said during one discussion.

Arthur McFarland, a member of St. Patrick Parish in Charleston, South Carolina, and a leader with Charleston Area Justice Ministry, said prayer was helpful, but action also was necessary.

“If you want change, you have to get off your knees,” he said.

Archbishop Jose H. Gomez of Los Angeles, vice president of the U.S. Conference of Catholic Bishops, told the assembly Feb. 17 that fear has spread since Trump’s election in November even though it was President Barack Obama who presided over the deportation of a record 2.5 million people in his eight-year presidency. Children at archdiocesan schools are “terrified” that they will return home to find their parents deported, he said.

He noted that he did not appreciate “the sense of indifference and cruelty that seems to be coming from this new administration in Washington.”

“It is not right that people are being forced to live this way,” Archbishop Gomez said. “No matter if they have broken our immigration laws. They are still human beings. They have dignity and human rights.”

The archbishop reiterated the USCCB’s stance on the need for comprehensive immigration reform as an issue of social justice. Neither the new Congress nor the current administration has proposed legislation addressing the country’s immigration concerns, however.

Such comments were welcomed, but grass-roots activists implored clergy, particularly Catholic bishops, to speak more often from the pulpit about such concerns and to step up to lead demonstrations protesting racism, discrimination and deportations.

Addressing another perspective of world migration, Jesuit Father Michael Czerny, undersecretary of the Migrants and Refugee Section of the Vatican’s Dicastery for Promoting Integral Human Development, told the gathering that while millions of people today are on the move globally, the situation is not a crisis because the migration of people has occurred throughout human history.

Father Czerny recalled how he and his brother as children fled communist Czechoslovakia to Canada in 1948 with his family because his parents wanted a better life for their sons. The same situation characterizes migrants today, he said.

The Jesuit called for people to respond to the needs of migrants because families do not make a decision to flee their homelands without deep thought and reflection.

“Migration should be a step toward life and hope,” he said, “and not falling to fear and repression.”