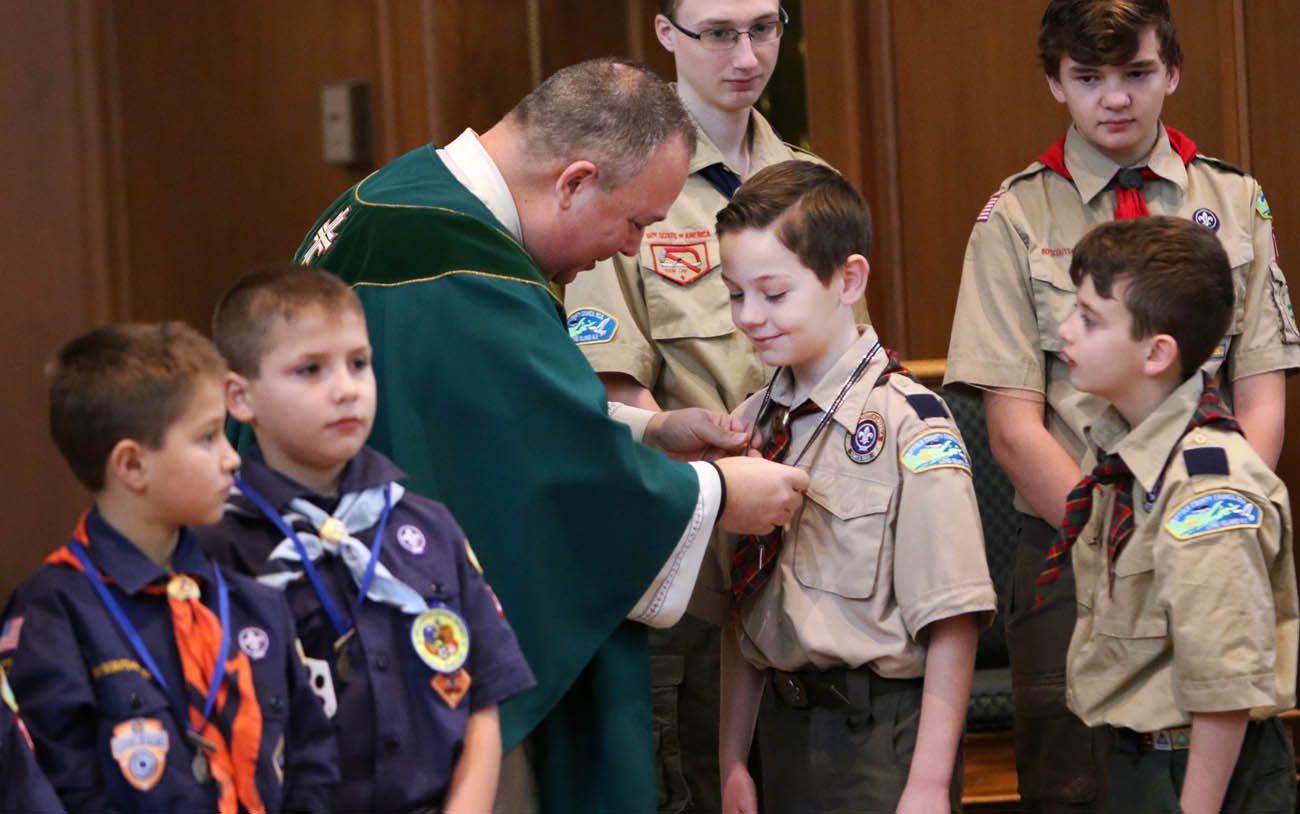 Father Sean Gann presents Children of God and Light of Christ medals to Scout honorees during a Mass marking Scout Sunday at St. Joseph Church in Kings Park, N.Y., Feb. 5. Scout Sunday is celebrated annually by the Boy Scouts of America to recognize the contributions of young people and adults to Scouting. (CNS photo/Gregory A. Shemitz)

IRVING, Texas (CNS) — The Boy Scouts of America’s new policy to accept members based on their gender identity will have no impact on Scouting units sponsored by the Catholic Church, said the National Catholic Committee on Scouting.

The change in policy “has no impact on the operation and program delivery of Scouting program(s) in Catholic-chartered units,” said a Feb. 4 statement issued by the Catholic Scouting committee.

“Scouting serves the Catholic Church through the charter concept, which is similar to a franchise,” it said. “The units chartered to a Catholic institution are owned by that organization. The BSA has stipulated that religious partners will continue to have the right to make decisions for their units based on their religious beliefs.”

The statement was signed by George S. Sparks, national chairman of the National Catholic Committee on Scouting, and Father Kevin M. Smith, a priest of the Diocese of Rockville Centre, New York, who is national chaplain of Catholic Scouting. The statement was approved by Bishop Robert E. Guglielmone of Charleston, South Carolina, who is the episcopal liaison between Catholic Scouting and the U.S. Conference of Catholic Bishops.

In announcing the membership change, Michael Surbaugh, chief Scout executive, said the organization has been “challenged by a very complex topic — the issue of gender identity.” “After weeks of significant conversations” at all levels of the Scouting organization, he said, officials decided a birth certificate is no longer sufficient for determining eligibility for participating in Cub Scouts or Boy Scouts.

“We’ve taken the opportunity to evaluate and update our approach,” he said in a video message posted online. “I hope you’ll join with me in embracing the opportunity to bring Scouting to more families and children who can benefit from what our organization has to offer.”

“This is an area that we will continue to thoughtfully evaluate to bring the benefits of Scouting to the greatest number of youth possible all while remaining true to our core beliefs,” Surbaugh said.

Those beliefs, he said, are based on the Scout Oath, which begins “with duty to God,” and the Scout Law, which ends” with a Scout’s obligation to be reverent.”

In a separate statement emailed Feb. 7 to Catholic News Service, Effie Delimarkos, the Boy Scouts’ director of communications, reiterated that “we will accept and register youth in the Cub and Boy Scout programs based on the gender identity indicated on the application. Our organization’s local councils will help find units that can provide for the best interest of the child.”

The organization did not say if a specific case had prompted the policy change, but another spokesperson told CNS that Boy Scouts’ “approach to gender identity was no longer sufficient as communities are now interpreting gender identity differently.”

Sparks and Father Smith said in their statement: “Scouting’s chartered organizations have the right to uphold their own moral standards within the units they charter. The teachings of the Catholic Church are upheld.”

About 70 percent of Boy Scout troops are run by faith-based groups.