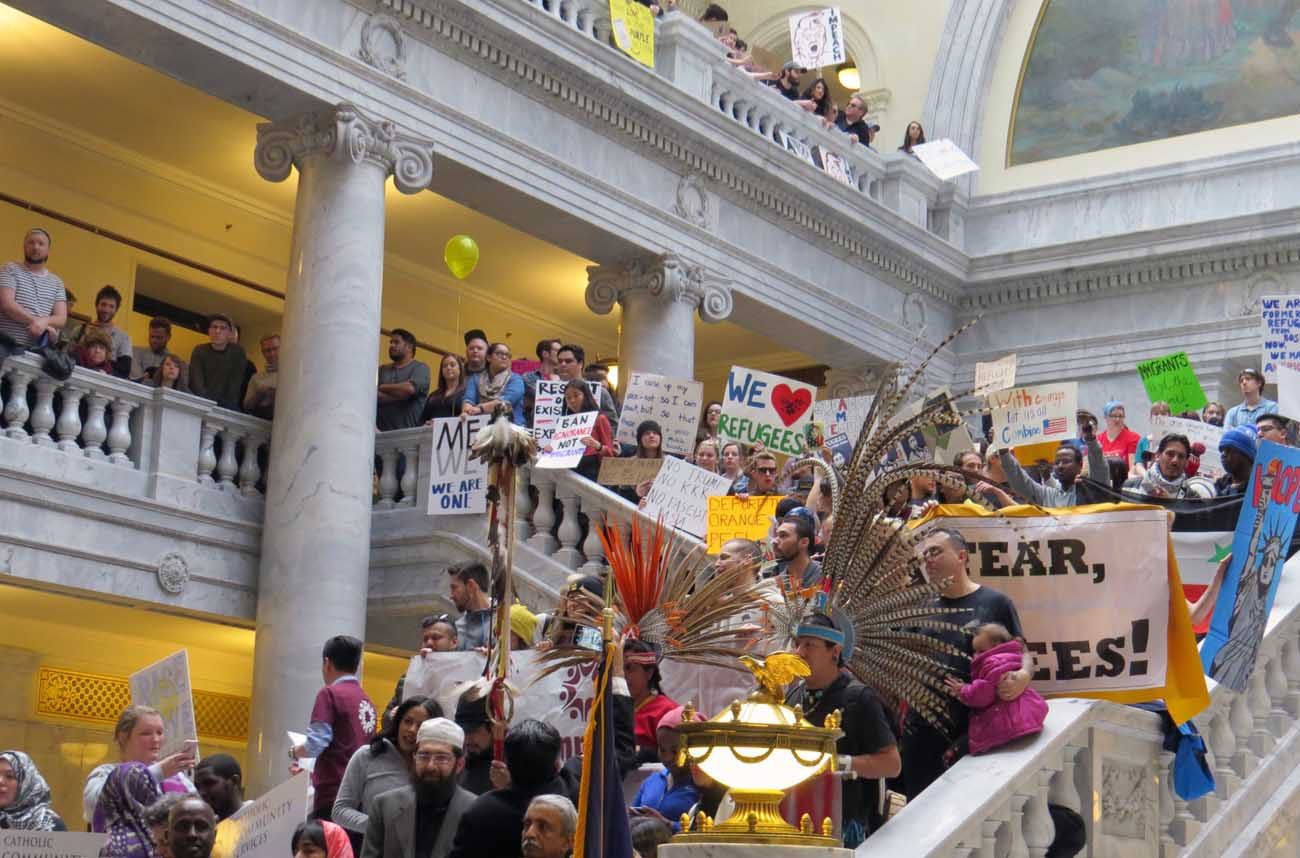 UPDATED – SALT LAKE CITY (CNS) — What started with hundreds of people gathering in downtown Salt Lake transformed into thousands of people marching to the Utah Capitol in support of refugees and immigrants in the country.

The march was a reaction to President Donald Trump’s executive order that prohibited travelers from seven predominantly Muslim countries from entering the United States for 90 days and barring all refugees for 120 days.

Tall, short, children, adults, the elderly, people with special needs, people of different cultures, religions and beliefs all became one Feb. 4, sending a message to lawmakers and to the world that the lives of refugees and immigrants matter and they are welcome in Utah.

In Salt Lake City, Megan Richards, who works at United Way of Utah, said she was participating “because I know a lot of beautiful immigrants and refugees, my friends and my colleagues are part of them and I love them and I wanted to be here.”

Wearing a Statue of Liberty crown, Richards said that she considered it important to raise her voice by participating in the march.

“When you are an immigrant or a refugee, your voice doesn’t get heard. Sometimes it’s on purpose that it’s covered, and this is a chance to stand with immigrants and refugees and to show them that we care, and I am also here to make sure their voices are heard and amplified,” she told the Intermountain Catholic, newspaper of the Diocese of Salt Lake City.

The march began at the Wallace Bennett Federal Building with a chain of children, representing diverse cultures and upbringings, holding hands.

“So many of my students have refugee status,” said Rebecca Richardson, a teacher at East High School.

“They just transformed my life and I am a better person and a better human being because of them,” she said, with tears running down her cheeks.

She said that she has heard so many human stories “that people don’t know about. They have experienced poverty and violence and the worst of humanity, and yet they bring the best of humanity with them. They make our community stronger and better because they bring that strength and that resilience and understanding of the importance of education.”

Banning that population would be criminal, she said.

“I can’t imagine my life without them in it, having the experiences that I had with these extraordinary human beings has make me a better human being. Banning them — it’s more than heartbreaking,” Richardson said. “We are not just hurting them, we are devastating them and we are devastating ourselves.”

The crowd marched to the Capitol chanting phrases such as “No hate, no fear, refugees are welcome here” and carrying banners displaying words such as “Jesus was a refugee,” “We welcome and protect each other,” and “As I have loved you, love one another.”

“We feel this is a way to unite the community,” said Sabhea Masad, a college student and Muslim who, with her sister and friends, participated in the march, which she said was the first time that she has seen people getting together to stand up for refugees and people of other religions.

“It’s really nice; as human being, it means a lot,” Masad said.

At the Capitol, a program led by refugees highlighted their experiences of coming to Utah to build a better life for their families.

Speakers included Salt Lake City Mayor Jackie Biskupski and Aden Batar, director of immigration and refugee resettlement of Catholic Community Services, which has resettled more than 30,000 refugees in Utah since the 1970s.

Batar, who immigrated from Somalia in 1994, said he was concerned about Trump’s Jan. 27 executive order suspending the entire U.S. refugee resettlement program for 120 days and banned entry of all citizens from Syria, Iraq, Iran, Sudan, Libya, Yemen and Somalia for 90 days.

A federal judge in Seattle late Feb. 3 temporarily blocked Trump’s order, and the administration appealed the ruling to the U.S. Court of Appeals for the 9th Circuit, based in San Francisco. Early Feb. 6, the circuit court ruled to uphold the lower court and scheduled arguments to be heard by three judges on the court late Feb. 7. By late Feb. 8 no decision was forthcoming.

“This ban is not making America great,” said Batar, who immigrated to the U.S. in search of freedom and education.

“I wanted a safer place where I could raise my children,” he said. “I’m a contributing member of this society. I pay taxes. I’ve paid my time back; I volunteered. So, this is what refuges all want. Refugees are welcome in Utah,” said Batar as people erupted with claps and cheers.

Among the refugees in Utah is Akachi Nzeogwu, who fled with his family from the Congo to Uganda, where they lived in a refugee camp.

“It was really tough,” he said. “Life was really hard. There was not enough food, there were lots and lots of people. We slept on the floor, we picked leftovers from the floor.”

After some years and with help from the United Nations, the family was able to start the process to immigrate as refugees. Five years ago they came to Utah. Nzeogwu now is a student at Salt Lake Community College.

“It was only by God’s grace that we are here,” Nzeogwu said. “(We are) human beings, not animals.”

Among those who marched at the Ogden rally was was Amelia Gonzalez, who carried a sign saying, “Immigrant rights are civil rights.”

“We do believe that America was made of immigrants. … I believe we’re all immigrants and we all have rights,” said Gonzalez, adding that her husband, who stayed home with their children, is an immigrant.

The marchers chanted “No hate, no fear, refugees are welcome here” and “Build bridges, not walls” as they walked to the municipal building.

Tina Zisumbo, a St. Joseph parishioner, said she had been afraid to participate, but decided to march “because we need to stand up and not be silent.”

For Kelly Stowe, a Salt Lake City resident who helps an Iraqi refugee family, the march was a way to show her support, particularly now that she has seen the effect that the executive order has had in keeping families apart, she told the Intermountain Catholic.

The family she helps is loving and kind; the father has a job, is taking English classes and makes sure the children attend school, she said. “They’re not standing around waiting for handouts.”

Rally speakers included Luis Lopez, a member of the Ogden City Council, who was born and raised in Guadalajara, Mexico, before coming to the United States when he was 19.

“So, my friends, we are a nation of immigrants,” he said, adding that “we cannot allow fear to overshadow the social-justice principles that are the bedrock of our society, that have made this nation great. We cannot let fear divide us.”

Vallejo is a staff writer at the Intermountain Catholic, newspaper of the Diocese of Salt Lake City. Contributing to this story was Marie Mischel, editor of the newspaper.