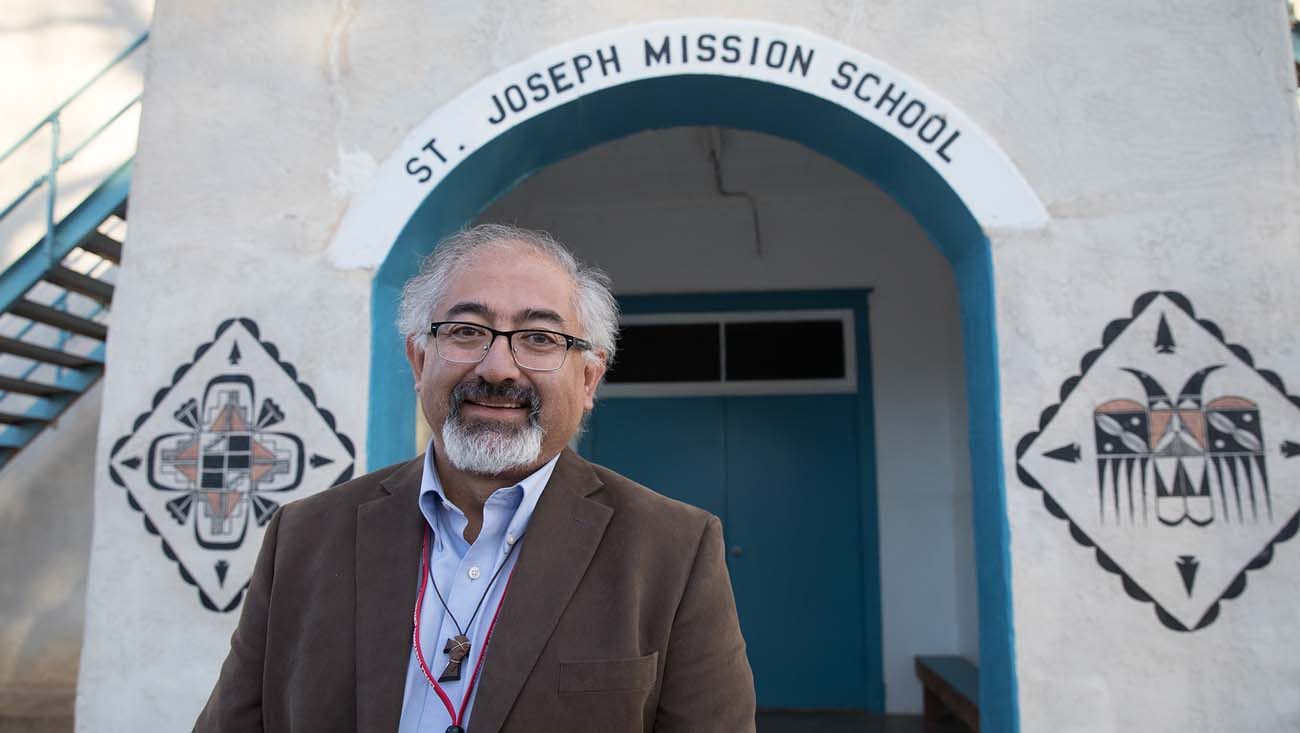 SAN FIDEL, N.M. (CNS) — National Catholic Schools Week has come and gone, but the work of forming students in a faithful Catholic environment is never finished for teachers, principals and school administrators across the country.

The presence of Catholic schools is especially needed in some of the poorest areas of the country. By providing a quality education, the church helps young people in poor communities to realize their potential.

This is exactly what principal Antonio Trujillo is accomplishing at St. Joseph Mission School in rural San Fidel in the Diocese of Gallup. Trujillo arrived at the school six years ago and saved it from the brink of closure.

By integrating Catholic values into the students’ everyday education, Trujillo and his staff are creating a hopeful future for the largely Native American student body in an area of the country where hope can sometimes be hard to find.

“We service about a 10,000-square-mile radius of Native Americans who live in the area,” Trujillo said in an interview with Extension magazine and in an accompanying video, https://youtu.be/ItSi54_hufo. “We are a mission diocese and we just don’t have the resources because there is no major source of employment or population center.”

St. Joseph School was built in 1920 with the help of funds from Catholic Extension, the Chicago-based national Catholic fundraising organization that constructs churches and builds up the Catholic Church in America’s poorest places.

“We only started with 12 students, and now we’re at 60 students,” Trujillo said. “I started working hard to make connections with the community to send their children here, and so we slowly built our grade levels up.”

Funded by Catholic Extension, Trujillo and his classmates completed courses online and at Loyola Marymount to receive a graduate-level certificate in Catholic school administration.

But the classes and certification were just a gateway to the real fruits of the program — meeting other Catholic school administrators in equally difficult situations and creating a network of support and fellowship.

Trujillo said going through the program and engaging in this community gave him his mojo back, as he was beginning to feel burned out by the bleak situation of the struggling school and the endemic poverty of the area. By refocusing on the school’s true mission to be a beacon of hope and faith, Trujillo found the momentum to hire dedicated teachers and increase enrollment.

“I was able through that program to bring a sense of spirituality, a sense of Catholic identity and a sense of mission within the Catholic Church to evangelize and touch the hearts of the children we serve,” he said. “Most of them are Catholic, and we allow the children to have a sense of the traditions that come from their own traditional ways and incorporate it into the Franciscan teachings of St. Francis, especially of ecology.”

Trujillo’s energetic positivity about the Catholic faith and the difference that faith can make is rubbing off on the students as well. The student body recently gathered for a Catholic Schools Week Mass in the school’s humble chapel, presided over by a visiting priest who drove many miles to be there. The priest is one of just 12 who serve the widespread Diocese of Gallup — the only U.S. diocese that crosses state lines between New Mexico and Arizona.

The students sat in rapt attention during the Mass, singing the songs and participating in prayers. After Mass, they listened intently as the governors of the Acoma and Laguna tribes offered words of wisdom and participated in a special candle blessing ceremony.

Inside the classrooms — where multiple grade levels are taught by a single teacher — students of all ages are excited to show off their latest projects, with one first-grader excitedly pointing out a green bud barely visible in the soil of the potted plant he has been tending for science class.

Trujillo described the school’s growth and success with a similarly botanic metaphor, comparing the plight of a mission diocese like Gallup to the challenges of living in a desert.

“In the desert, there’s hardly any water. For any farming that is done, we can’t just spread water any which way,” he said. “In education, there are very little resources, so we have to make do with what we have, but what we do is make the best of it.”

By all accounts, the school’s efforts are bearing incredible fruit. Eighty percent of St. Joseph’s students graduate, go to high school and finish college. They have gone on to jobs in business, health care, tribal leadership and the state Legislature. One of them even came back to teach at St. Joseph.

These success stories are emblematic of the school’s goal to empower students with a feeling of self-worth that is rooted in the Catholic faith, Trujillo said.

“We want to touch the hearts of the children to know Jesus,” he said. “That’s the mission — Jesus — and how we get the children to understand that they are loved, and from there, everything else flows.”