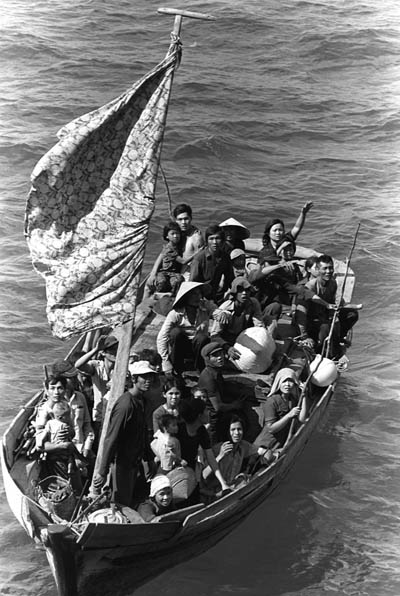 Vietnamese boat people are pictured in an undated photo. A California Salesian priest who as a child was among refugees fleeing Vietnam by boat after the fall of Saigon recently wrote an open letter President Donald Trump offering to swap his own citizenship with a refugee from one of the Muslim-majority countries subject to Trump’s travel ban. (CNS photo/Wikipedia)

WASHINGTON (CNS) — A Vietnamese-born Salesian priest has offered to President Donald Trump that he would trade his own U.S. citizenship with a refugee to allow into the United States someone from one of the countries Trump listed in his Jan. 27 travel ban.

Father Chuong Hoai Nguyen, a Salesian of Don Bosco, who is serving in California, is a refugee-turned-U.S. citizen. He came to the United States as one of the Vietnamese “boat people” following the 1975 collapse of South Vietnam.

His citizenship offer came in an open letter to Trump Jan. 27, the same day the president issued an executive order that suspended the entire U.S. refugee resettlement program for 120 days and banned entry of all citizens from seven majority-Muslim countries for 90 days. The order has been held up in court.

Father Nguyen said he has heard nothing from the White House since his open letter to Trump was published. The date on the letter, which has appeared on Commonweal magazine’s blog and been the topic of a number of stories, also was the beginning of the Vietnamese New Year, called Tet.

The priest told Catholic News Service in a telephone interview that he has talked with his superiors in the order about ministering in the country native to the refugee who would be the beneficiary of the swap. “Whenever you’re ready, we’ll pick you up and reassign you,” he said, is the message he got from his conversation with his superiors.

“Becoming a refugee is a choice one makes when there are no other options,” said Father Nguyen in his open letter, adding that when he heard of the executive order, “my heart and my soul were frozen.”

Although Father Nguyen told CNS he had been battling the flu for most of the three weeks since he wrote his letter, “I did send it three times” to the president. “But with all the busyness and the chaos that we read on the news,” he said he understands if it hasn’t been read.

Father Nguyen said he could see himself ministering in Syria, one of the seven Muslim-majority countries listed by Trump in his Jan. 27 order. With courts in Washington state and Virginia having stymied implementation of the order, the White House has said it will reissue it.

“I did not want to be a hero. I really wanted to see the commitment” from the White House, he said. “I’ve been a refugee! Been there, done that.”

In his letter to Trump, Father Nguyen described his refugee experience.

“On April 29, 1975, the day before the ‘fall of Saigon,’ my parents put me, my brothers and sisters, ages 6-21, on that perilous journey into the unknown. Our overcrowded boat had no captain and no crew; my father, brothers, and many others became seamen on that weeklong trip with little food or water,” he recounted. “We were lucky to have even gotten on that boat. My parents had already fled North Vietnam in 1953, and were again fleeing the Cong San (Viet Cong) and communist rule.”

He told CNS he recalled being given three bags: “a bag of clothes, a bag of food and a bag of Vietnamese money.” Remembering his own refugee experiences, Father Nguyen said, “It’s really sad. You’re no longer human.”

Father Nguyen added in his letter, “The U.S. 7th Fleet watched over our vessel and guided us from international waters to Subic Bay (in the Philippines) where we were warmly welcomed as political refugees. We were fortunate. We survived — unlike the estimated 200,000 to 400,000 refugees who died at sea. We were given the gift of life and we have not squandered that gift.”

Since coming to the United States, “I have done my best to ‘make America great,'” he said, talking in the letter about his joining the Salesian order in 1979 and his ministries while in the priesthood.

Father Nguyen currently is director of youth ministry and a youth retreat specialist at St. Joseph Salesian Youth Renewal Center, in Rosemead, California, and chaplain for the Vietnamese Catholic community at San Gabriel Mission in the Archdiocese of Los Angeles.

NEXT: New Mexico school a beacon of hope, faith for Native American youth