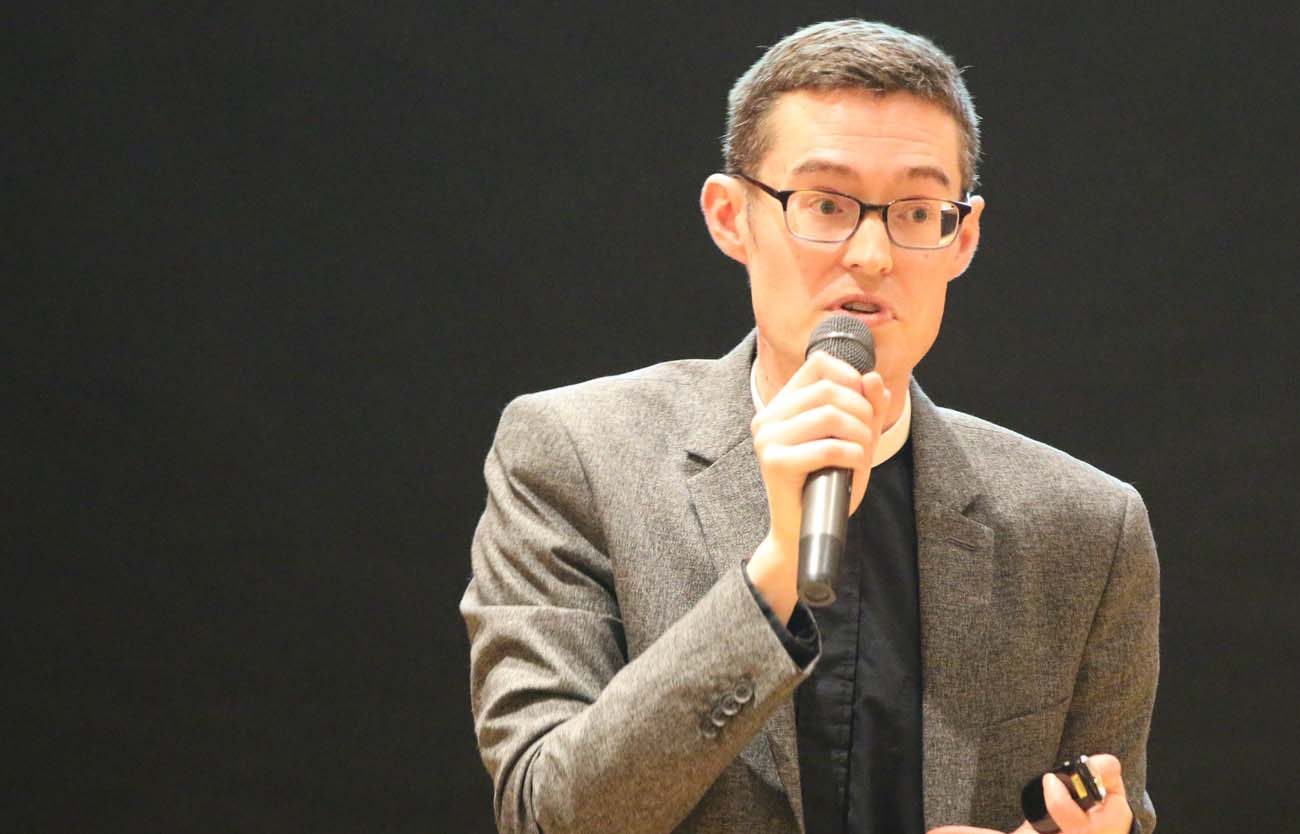 The Rev. Nathan LeRud of Trinity Episcopal Cathedral speaks Feb. 7 during a talk with a neighboring rabbi and Catholic priest in Portland, Ore. In response to the Trump administration's actions on immigration and refugees, the three religious leaders said that welcoming the stranger is a deep-rooted religious imperative. (CNS photo/Ed Langlois, Catholic Sentinel)

PORTLAND, Ore. (CNS) — If there is a registry of Muslims in the United States, Rabbi Michael Cahana will register himself as a Muslim.

Rabbi Cahana, of Temple Beth Israel in Portland, made the declaration Feb. 7 during an annual talk given jointly with neighboring Catholic and Episcopal pastors.

Msgr. Patrick Brennan of St. Mary Cathedral of the Immaculate Conception and the Rev. Nathan LeRud of Trinity Episcopal Cathedral joined the rabbi in discussing the religious tradition of welcoming the stranger.

Speaking to a crowd of hundreds convened in a Trinity Cathedral social hall, all three Portland faith leaders criticized the Trump administration’s executive order to temporarily ban Muslim immigration from seven Muslim-majority nations. They did so not politically, but theologically.

President Donald Trump’s order on refugees has been held up in the courts. He planned to issue a revised executive order the week of Feb. 20.

As for a Muslim registry, Trump as a presidential candidate in 2015 said he supported requiring Muslim immigrants to register. His administration, however, has said it has no plans for such a registry. The Obama administration had a registry in place until last December. It was a post-9/11 requirement that immigrant Muslim men register, but President Barack Obama said it had not been used since 2011.

In his remarks, Msgr. Brennan said, “Some of the worst atrocities in history happened because Christians did not speak up. We can’t let that happen again.”

The son of an Irish immigrant father and an Austrian immigrant mother, the monsignor said Catholics cannot forget that, in the 19th century, they were the group some Americans wanted to ban. Immigrants and refugees love the United States, he said.

Msgr. Brennan held up a copy of the Compendium of the Social Doctrine of the Church and cited St. John Paul and Pope Francis, who both made special appeals for immigrants and refugees.

In his first trip outside of Rome after he was elected, Pope Francis visited Lampedusa, a Mediterranean island where African refugees often land — or wash up dead. The pope condemned “global indifference,” Msgr. Brennan told listeners, adding that the Vatican is likely keeping a close eye on the U.S. immigration debate.

Rabbi Cahana said Hebrew Scripture contains the command to love the stranger as a response to the long history of exile. “You don’t do to others what was done to you while you were a slave in Egypt,” he told the crowd. “To love the stranger. That is not just saying, ‘I tolerate you.'”

Jewish tradition holds that borders are acceptable to protect identity and guard a country from those who wish ill, but boundaries must be balanced with being openhearted, the rabbi said.

From Babylon to Egypt and medieval Spain, Jews often have been expelled. In 1939, the U.S. government blocked the St. Louis, a ship full of Jews fleeing Europe. The vessel was sent back, and many passengers were caught up in the Holocaust. Those who know that story are concerned by the current temporary U.S. ban on refugees, which is being argued in courts.

Rev. LeRud said that over history, tribes who welcomed strangers had an evolutionary advantage because of an expanded gene pool. Hospitality became encoded in the religious impulse and faith groups became keepers of sanctuary. For example, those fleeing accusations or conflict could be safe if they got to a medieval church, he explained.

Jesus himself knew what it was to be an outsider, Rev. LeRud added.

“Jesus asks his followers to depend on the hospitality of others who are not kin,” he explained, adding that few of us know that experience and so may have trouble understanding immigrants and refugees.

The Christian promise, Rev. LeRud concluded, is that when we help a stranger in need, “we engage Christ himself.”

PREVIOUS: Trump administration urged to do all it can to ‘care for creation’

NEXT: Grass-roots leaders join call for ‘disrupting’ oppression that hurts many