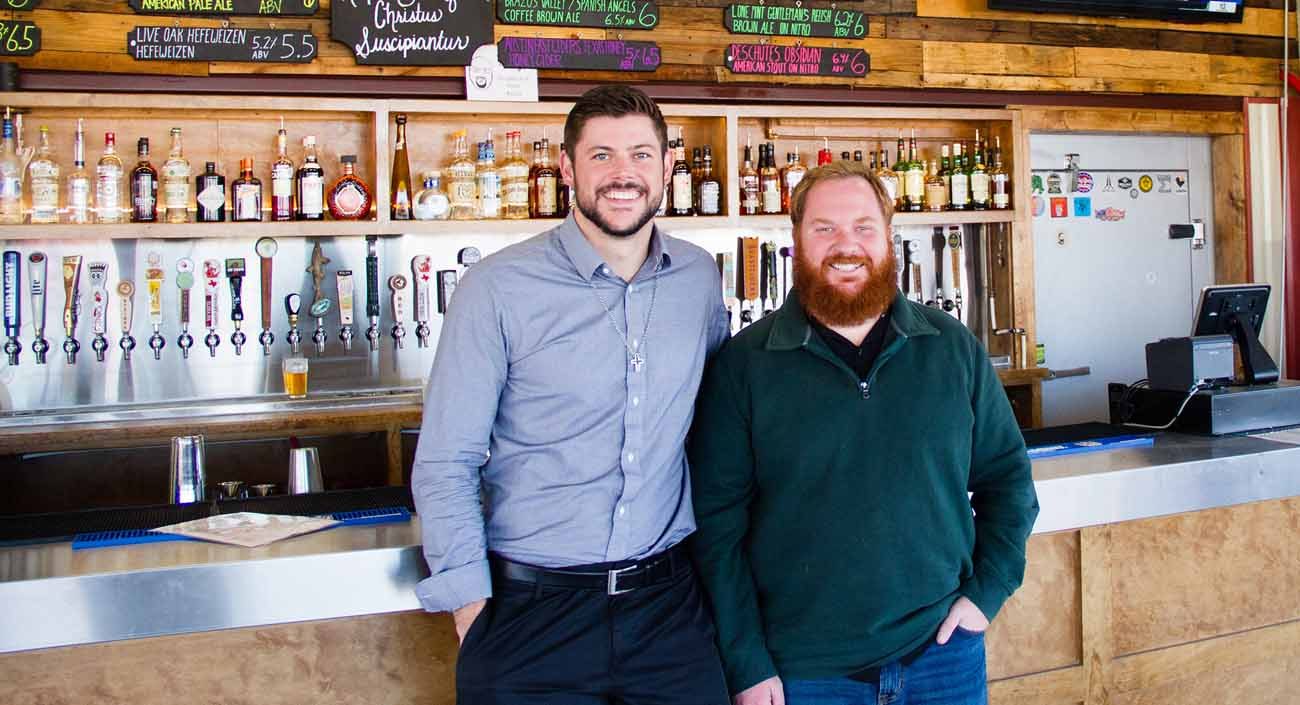 MAGNOLIA, Texas (CNS) — Above a row of dozens of craft beer taps, a handwritten line from the Rule of St. Benedict declares a mission: “Hospites Tamquam Christus Siscipiantur.”

Translated from Latin, it says, “Greet others as if they were Christ,” or “All guests have been received as Christ.” It’s the mandate that motivates Kevin Mims and Joey Muckenthaler, co-owners of Deacon Baldy’s Bar and Food Truck Park, to serve all who visit their newer Magnolia business venture as if they were Christ.

Northwest of Houston, Deacon Baldy’s features a rotation of several gourmet food trucks with a curated selection of 40 craft beers from breweries in California to neighboring Conroe, among dozens of others, and it was named after the late Deacon Mike Mims of St. Anthony of Padua Catholic Church in The Woodlands. Deacon Mims, who was Kevin Mims’ father, died in a helicopter accident in January 2015.

According to Mims, he and his father were already developing the idea for a food truck park in the area. And when the deacon died, Mims brought on high school friend Muckenthaler to make the dream a reality.

Just outside the pavilion, a lofty tower bears a stylized image of Deacon Mims himself. A pair of glasses keeps watch over the road and the families who pass by and through Deacon Baldy’s. Mims said the Deacon Baldy’s team did a lot of work, building the long community-style picnic tables, as well as the bar’s hanging door. Back inside the pavilion, small crosses, images of Mary and other signs of faith pepper the structure, almost organic symbols of the duo’s faith lives.

The question can be obvious at times: “Who is Deacon Baldy? The face on the tower?” Dozens will ask Muckenthaler and his staff behind the bar this question. This is how conversations about faith and life come up organically on both sides of the bar, Muckenthaler told the Texas Catholic Herald, newspaper of the Archdiocese of Galveston-Houston.

Not long after opening, a couple stopped Mims to ask about a cross hung on a nearby wall. This spurred an organic conversation about the Catholic Church, Jesus Christ and faith, in the middle of one of the busiest nights.

For Mims and Muckenthaler, life before Deacon Baldy’s revolved around faith. Mims’ father was a very active deacon and businessman and Muckenthaler was no stranger to catechesis, serving teens for almost a decade as a youth minister in Houston and Austin.

Truly a business venture, the two dealt with the tough learning curve of opening a new business in a burgeoning area like Magnolia. But soon the staff learned how to handle the bumps of business, how to have conversations like Mims’ and how to keep going.

Muckenthaler said that while he doesn’t minister to teens anymore, he finds himself ministering to his staff.

“People in the hospitality industry are very special people,” often times many struggle with alcoholism, drug addiction, broken homes and a paycheck-to-paycheck living, he said. “Everyone needs help, love and advice. My staff knows they can talk me, and I hope to introduce Christ in conversation.”

Father Tom Rafferty, pastor at nearby St. Anthony of Padua Catholic Church, where the deacon served, said Deacon Mims was “all about family.”

“He was completely devoted to his personal family, his parish family and the family of the church worldwide,” he said. Father Rafferty said a clear example of this devotion was seen in the medical and sacramental mission in Honduras that the deacon helped lead.

“Deacon Mike was a valued friend. He gave me unconditional support as a priest and as a person,” the priest said. “I miss him, but I know he continues to bless me and the parish he served.”

That unconditional love falls right in line with the Christian hospitality that drives Mims and Muckenthaler.

Faith is “how we run our lives,” Mims said. “It’s a factor in everything we do.” The team hopes to serve a beer whose profits will go directly back to charity, in addition to the number of charity events already hosted at the venue.

“Being able to serve people, whatever capacity that is — serving a beer, or serving a charity — it’s the little things that we can do,” Mims continued. “I don’t know that we’re going to change the world with the donations we can give, but being able to have that as part of what we do, it’s visible to those who come here enough to notice it.”

Muckenthaler said the biblical understanding of hospitality is very different from other faiths.

“Christian hospitality should be different, you should treat people differently,” he said. “People should say ‘I feel loved when I interact with them.’ We try to do that here, it’s something I try to stress to my staff, making people feel not like they’re at home, but like they’re being invited into your home, and you treat them that way.”

In a wood-chipped corner of the park, a few kids aimlessly throw bean bags in the general direction of a cornhole box. A few steps away, their mothers lean into conversation over cake and gifts during a pastel baby shower celebration.

“We built this place this to be family friendly intentionally,” Mims said. Both men have families with small children, and Deacon Baldy’s provides ample space and time for families big and small, young and old, he said.

Deacon Baldy’s community-style seating prompts conversation among strangers. And more and more groups are finding a home at the place, including a local Theology on Tap young adults group and a nearby parish’s men’s group.

“It’s a great place to come and hang out and bring the family, which is exactly what we wanted,” Muckenthaler said. “There are ways my faith has impacted the business directly and indirectly. It’s also enabled him to spend more time with his family, he said. “We have more time for family prayer.”

People often come up to Mims and Muckenthaler to share their memories of encounters with Deacon Mims. Former co-workers, families with babies baptized by the deacon and those with a single encounter with the deacon all remember the bald, bespectacled man with a huge grin.

“It’s amazing how many people he impacted,” Muckenthaler said. “And getting to continue on that legacy in his brand of hospitality, which was a radical hospitality … is kind of what Deacon Baldy’s is all about.”

NEXT: Need for Catholic health care has never been greater, says cardinal