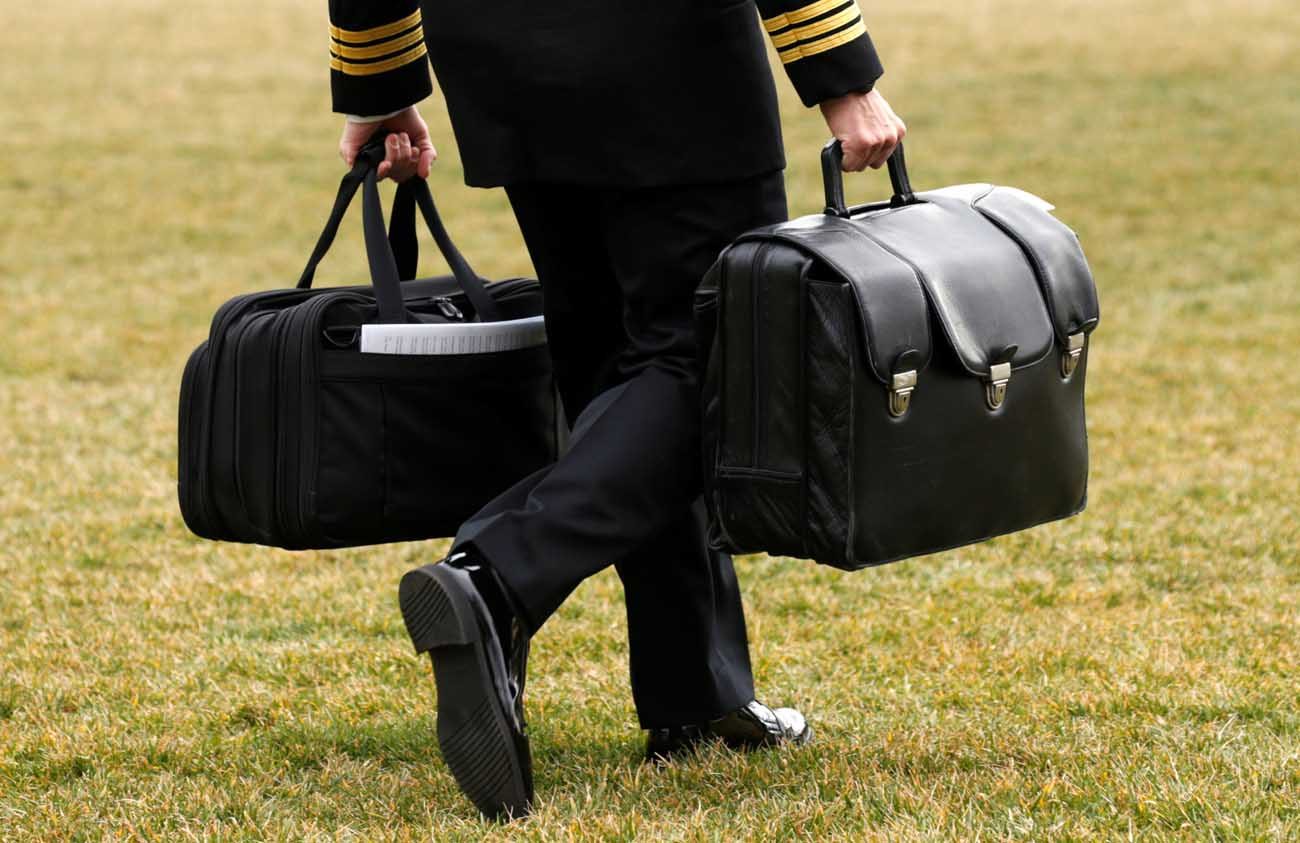 A military aide, carrying the "football" containing launch codes for nuclear weapons, accompanies U.S. President Donald Trump onto Marine One upon Trump's departure from the White House. The chairman of a U.S. bishops' committee urged Secretary of State Rex Tillerson to pursue additional reductions in the nuclear arsenals of the United States and Russia. (CNS photo/Kevin Lamarque, Reuters)

WASHINGTON (CNS) — The chairman of a U.S. bishops’ committee urged Secretary of State Rex Tillerson to pursue additional reductions in the nuclear arsenals of the United States and Russia.

“We urge bold and concrete commitments to accelerate verifiable nuclear disarmament,” Bishop Oscar Cantu of Las Cruces, New Mexico, chairman of the Committee on International Justice and Peace at the U.S. Conference of Catholic Bishops, wrote in the letter dated Feb. 14. It was released Feb. 15 by the USCCB.

The correspondence pressed the secretary of state to ensure that both countries build on the New START agreement, a pact negotiated in 2010 that calls for reducing their strategic arsenals — weapons deployed on intercontinental ballistic missiles, bombers and submarines — to 1,550 each by 2018.

The status of the treaty was broached by Putin, who asked Trump if the pact should be extended beyond 2018, Reuters reported Feb. 9, citing as sources two unnamed U.S. officials and one unnamed former U.S. official with knowledge of the call.

After consulting for a moment with staffers at his side, Trump told Putin the treaty was a bad deal negotiated by President Barack Obama’s administration and that it favored Russia, the report said. During his Senate confirmation hearings, Tillerson told the lawmakers he was in favor of the treaty.

A clause in the treaty allows both countries to extend the pact by up to five years by mutual agreement.

Observers in the nuclear disarmament field at the time the pact was reached credited Catholic involvement in urging the deal be closed. Rose E. Gottemoeller, a Catholic who left the State Department to become deputy secretary general of NATO last October, was the United States’ chief negotiator of the agreement.

Bishop Cantu’s letter said the U.S. and other nations that possess nuclear weapons “bear a particular responsibility for nuclear disarmament.” Because the U.S. and Russia together possess about 90 percent of the world’s nuclear warheads, he said, “it is particularly important” the two nations “continue to build on the New START treaty.” The bishop’s letter credited New START for its “robust verification measures” that have helped carry out the current round of arms reductions.

The letter also called for additional actions to reduce the threat of nuclear arms including “taking weapons off ‘launch on warning’ status to prevent a catastrophic accident; deeper cuts in nuclear arsenals; ratification of the Comprehensive Test Ban Treaty to bring it into force,” as well as “serious negotiations on a fissile material cut-off treaty” to prohibit further production of nuclear material for weapons.

The bishop opposed spending hundreds of billions of dollars to modernize nuclear weapons systems that “ultimately we must work to dismantle.”

Catholic leaders in the peace and disarmament community defended New START as a necessary step toward the abolition of nuclear weapons.

U.S.-Russia relations have long been tied to arms control agreements and now is not the time to abandon New START, said Gerard F. Powers, director of Catholic Peacebuilding Studies in the Kroc Institute for International Peace Studies at the University of Notre Dame.

“If President Trump is serious about improving relations with Russia, extending New START and opening negotiations on deeper reductions in the still-bloated nuclear arsenals of the United States and Russia are essential,” Powers told Catholic News Service.

Powers pointed to upcoming meetings at the United Nations to discuss a global ban of nuclear weapons as an example for the two nations to follow. “That’s (a ban) the direction we should be moving and not in the other direction,” he said.

“The carefully negotiated new START Treaty … was an important accomplishment in the much-too-slow process of nuclear disarmament,” she said in an email from London to CNS Feb. 10. “We are horrified that he is already walking down that dangerous road.”

Dennis was among more than 1,000 Catholic leaders who sent a letter prior to Trump’s inauguration urging him to adhere to existing arms treaties and step back from a new nuclear arms race.

The leaders said that continued reliance on nuclear weapons “is an affront to human dignity and the sacredness of life.” They called on Trump to support the upcoming U.N. negotiations to achieve a nuclear weapons ban.

“As you accept the heavy responsibility for the U.S. nuclear weapons policy we urge you to remember, in the words of the Holy See, that ‘the commitment to disarm embedded in the Nuclear Non-Proliferation Treaty and other international documents is more than a legal-political detail, it is a moral commitment on which the future of the world depends,'” the letter concluded.