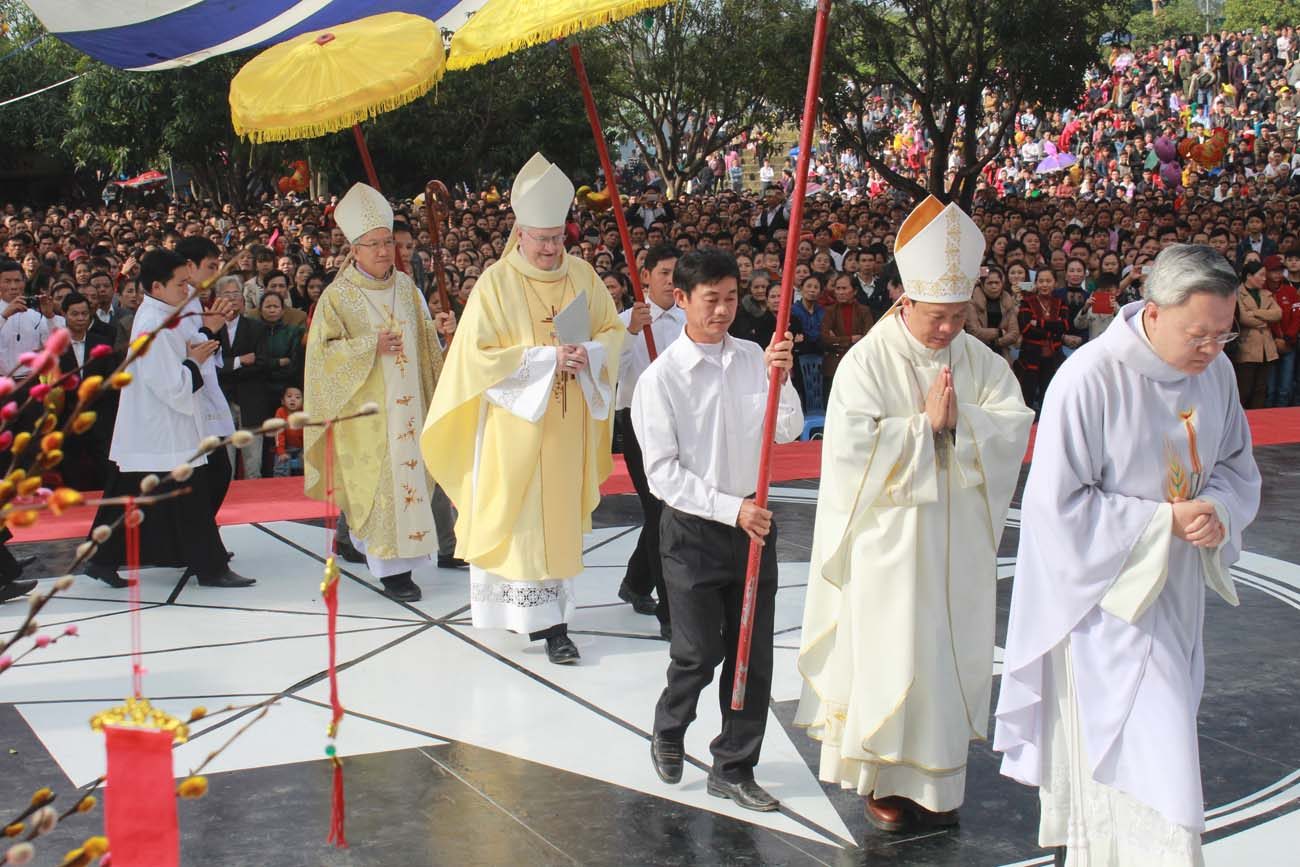 CHICAGO (CNS) — U.S. bishops sent their immediate past president to Vietnam to see how they could help with the first college-level Catholic school approved in the Asian country in about 40 years.

“The church in Vietnam has suffered … hardships and … religious repression, and slowly over these 40 years there are some headways that have been made,” the archbishop told Catholic News Service Feb. 2.

“I think the episcopal conference of Vietnam is naturally looking for friendship and opportunities to be able to (receive) support, not just tangibly, but kind of a heartfelt support that this visit showed,” Archbishop Kurtz said. “And this means a lot to them because so many of their family members migrated to the United States.”

He said as part of the visit, the U.S. Conference of Catholic Bishops wanted to know how it could help the brand new Catholic Institute of Vietnam.

“It’s really a rather significant step that the church has been able to take with the government,” he explained. “In Vietnam, pretty much everything needs prior approval by the government,” so it was impressive “that after a long period of negotiation, the government was able to approve this institute, which someday will become a university.”

Archbishop Kurtz said the church in Vietnam is looking for support to help build the institute’s library, create programs that would have students come to the U.S. to learn English, and help for starting a visiting professor program.

He also said it was important “to be able to experience the witness of faith by people who have had to struggle in order to live their faith.”

Under French rule from the late 1800s through 1975, the country had a strong Catholic presence, and the church was an influential force. But in 1975, when the communists took power after the Vietnam War, the government tightened control over religion and religious institutions. Catholics were harassed, arrested and detained as part of government crackdowns. In the first two decades under communism, hundreds of thousands of southern Vietnamese fled and an estimated 350,000 sought asylum in the U.S. The bishops’ conference website says there were nearly 500,000 Catholic Vietnamese-Americans in 2013.

In the early 1990s, as Vietnam opened up trade with other countries and relations with the United States started to normalize, Vietnam’s government got less involved in church affairs. There are still reports of sporadic crackdowns in different parts of the country. While the government is not involved in the church hierarchy, government approval is still required for numerous activities ranging from building churches in certain areas to doing certain church-related work.

Substantial portions of land previously owned by the church remain in the hands of the Vietnamese government.

“I saw instances where there had been former schools that had been taken over by the government,” said Archbishop Kurtz. “Currently, religious communities are able to conduct kindergarten, but they are not given permission to conduct schools. One of the issues that’s being identified now is the capacity for the church to open up its mission to schools and hospitals,” which he said were a vibrant part of society prior to 1975.

The passage late last year of the Law on Belief and Religion, which is meant to recognize the basic guarantees of freedom of religion, was heavily criticized by the U.K.-based religious freedom advocacy group Christian Solidarity Worldwide as being focused on “control and management of religious activities, rather than protection of religious freedom.” Archbishop Kurtz said the law “does at least recognize the existence of the church.”

During his Jan. 24-30 visit, Archbishop Kurtz visited dioceses in Hanoi, Ho Chi Minh City, Vinh, Hue and Xuan Loc, where he celebrated well-attended Masses, met with the Vietnamese bishops’ conference president, spoke with the U.S. Embassy deputy chief and spent time with Servants of Jesus sisters and some seminarians.

Orendain, currently in Chicago, covers Asia and the Philippines for CNS.

NEXT: ‘We are called to be saints,’ Bishop Barres says during installation Mass