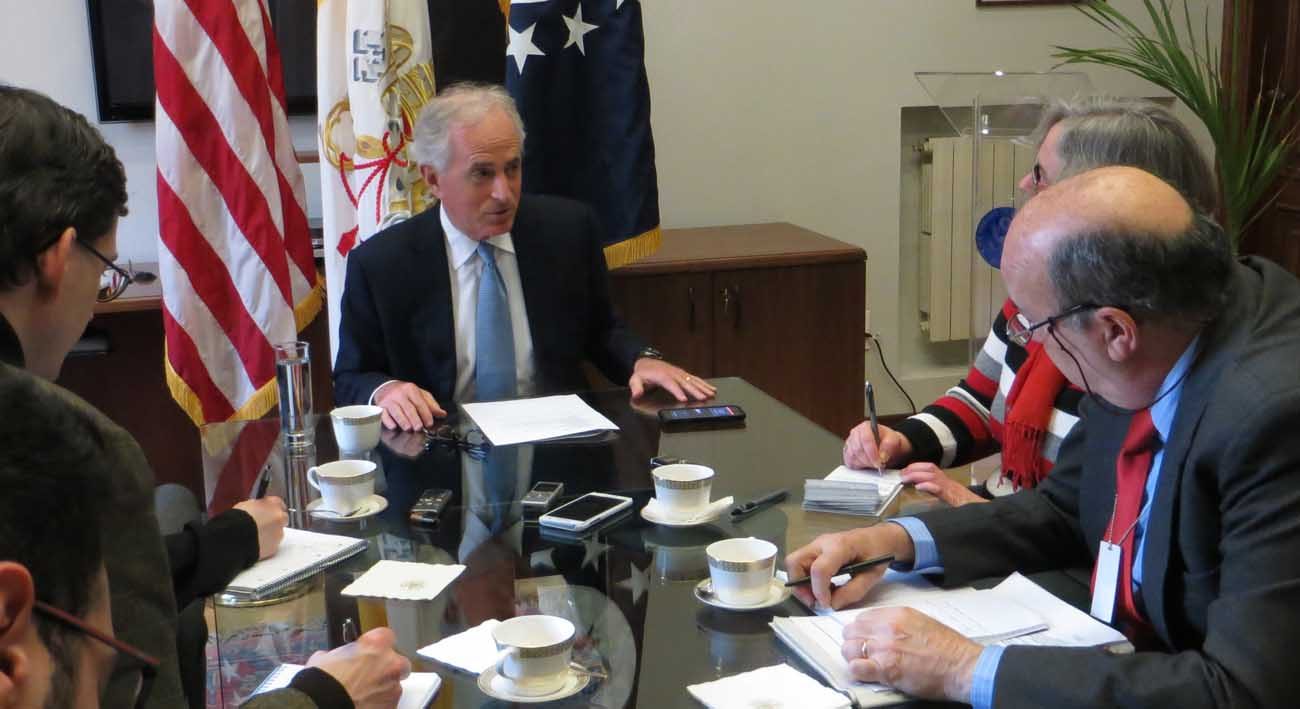 Corker told reporters Feb. 24 that while modern slavery was the focus of his visit, with so much international attention on President Donald Trump’s executive orders on immigration, “certainly it came up. It was not stressed. We understand the pope has spoken very strongly about this issue.”

The senator said the United States and the Vatican have a “mutual interest in dealing with modern slavery,” a phenomenon involving some 27 million people; 24 percent of them, he said, are involved in forced prostitution, while the remaining 76 percent are subjected to “hard labor.”

Pope Francis repeatedly has highlighted the connection between restrictive immigration policies and the growth of human trafficking.

“Obviously, the migrant issue and the crisis it has generated there makes people even more vulnerable,” Corker said.

The senator said he believed Trump’s executive orders on immigration were just the first step in a more comprehensive reform of U.S. immigration policy.

While the revised orders have not yet been published, Corker said he believes the restrictions on immigration from Syria and other predominantly Muslim countries where terrorism has been an issue would be a “temporary situation while they look at the vetting processes.”

“My hope is that what this is going to lead to is an immigration policy where we deal with the whole issue,” he said. “We’re beginning on the security front,” which responds to the concerns of many Americans.

Corker said he did not meet Cardinal Parolin has an emissary of the White House, but he does hope Trump will meet Pope Francis in May when the president is scheduled to be in Italy for a summit of the G-7 countries.

“Healthy relationships between our administration and the pope and the Vatican” are important for the people of the United States, he said. “As an American and as someone who sees the importance of this relationship, whether it’s in May or some other near-term point, I hope it occurs.”

Corker was not the only member of the Senate Foreign Relations Committee to visit the Vatican in late February.

Sen. Tim Kaine, D-Virginia, attended Pope Francis’ general audience Feb. 22 and spoke with the pope afterward about “the global refugee and migrant crisis,” his office said in a statement.

“As the pope stated so clearly yesterday (Feb. 21), it is a ‘moral imperative’ to protect and defend the ‘inalienable rights’ of refugees and respect their dignity, especially by adopting just laws that protect those fleeing dangerous or inhumane situations,” Kaine said.

The senator’s office said he also met with Archbishop Paul Gallagher, who is the Vatican foreign minister, participated in a discussion focused on Latin American issues with Vatican officials and met with the Jesuit Refugee Service to discuss its work with refugees and asylum seekers.

NEXT: Six answers on questions of celibacy and chastity