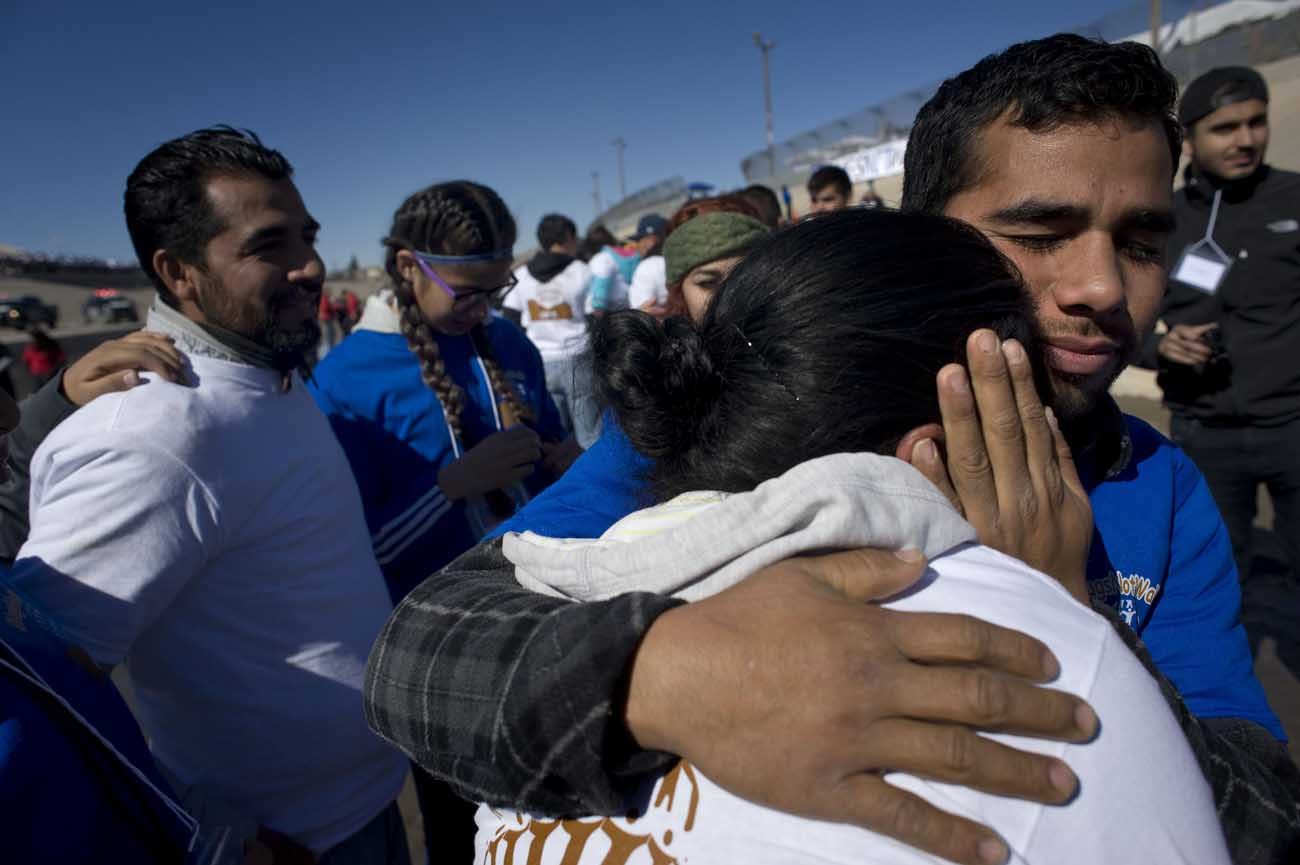 Family members embrace during a massive reunion called "Abrazos, No Muros" (Hugs, Not Walls) Jan. 28. Canadian refugee advocates expect to see a slight increase in border crossings from the U.S. as it toughens its immigration enforcement. (CNS photo/David Maung)

“It appears things will get worse for refugees (in the U.S.),” Scalabrinian Father Vincenzo Rosato told The Catholic Register, Canadian Catholic weekly. “The whole situation is creating a lot of uncertainty.”

The Scalabrini order is dedicated to serving migrants and refugees worldwide and runs safe houses for refugees along several borders, including the U.S.-Mexican border. The forces that have driven about 300 refugee claimants to cross into Manitoba from Minnesota and North Dakota since last April — including more than 40 who have arrived in Emerson, Manitoba, in just two weeks — may mean that the Scalabrinis have to set up similar safe houses near the Canada-U.S. border, Father Rosato said.

“This could become a real exodus and a new phenomenon,” he said. “If we have to provide for the immediate needs, I think we would be ready.”

Down at the U.S.-Mexican border, migrants have begun talking about the Canadian option, said Joanna Williams, director of education and advocacy for the Jesuit-sponsored Kino Border Initiative in Nogales, Arizona.

“I can’t say that we have firsthand experience with people actually making that decision,” she said. “I would understand if they did.”

Refugees at the U.S.-Mexican border are aware of Canadian Prime Minister Justin Trudeau’s statements of welcome for refugees, said Williams.

On Jan. 28, just after a series of U.S. executive orders suspended all refugee arrivals in the U.S. and banned travel from seven Muslim-majority nations, Trudeau tweeted: “To those fleeing persecution, terror & war, Canadians will welcome you, regardless of your faith. Diversity is our strength. #WelcomeToCanada.”

Those executive orders have since been challenged in court and are on hold.

Putting undocumented migrants in jails, setting immigration bonds as high as $40,000 and other ways of discouraging refugees from making claims in the U.S. have become more common, including “just turning them away altogether in violation of international law,” said Williams.

But she balked at the idea that the U.S. is no longer a safe third country for refugees whose claims might be accepted in Canada.

“Asylum isn’t necessarily accessible in the U.S., but I wouldn’t say that the U.S. is not a safe third country. That would seem a little extreme to us,” she said.

The Jesuit Refugee Service in the U.S. also rejects the idea that the United States under the Trump administration is unsafe.

“In the aftermath of the executive orders, there has been a huge groundswell of support for refugees,” said Giulia McPherson, director of advocacy and operations at JRS-USA.

“It’s even less safe than it was before,” Piche said. “For reasons that are quite plain to see, refugees don’t feel safe in the States anymore.”

However, Piche said he did not expect a “flood of people” because “it’s just more difficult to get here.”

Swan is associated editor of The Catholic Register.