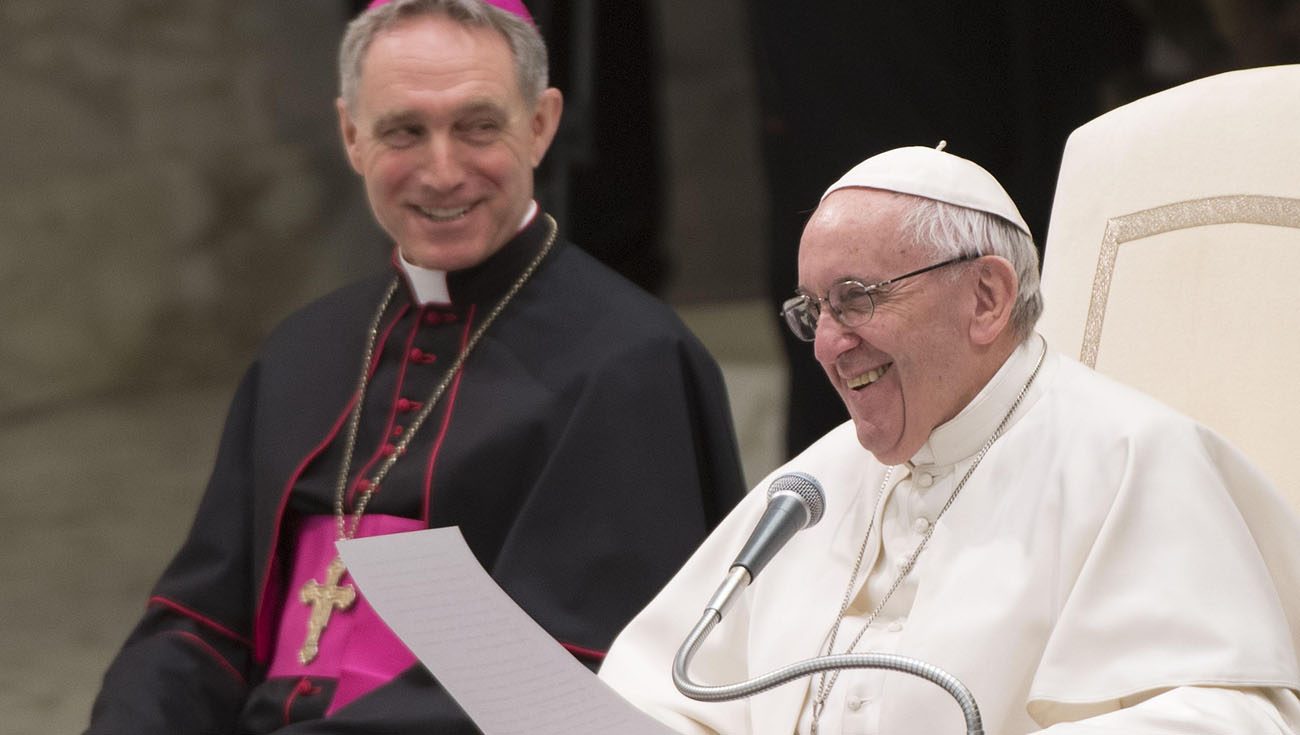 VATICAN CITY (CNS) — Christians must never lose hope and should remind themselves that God loves them even at their worst, Pope Francis said.

God’s love provides “security” both in difficult moments and even when “I have done something terrible and evil,” the pope said Feb. 15 during his weekly general audience.

“No one can take this security from us. We must repeat it like a prayer: God loves me. I am sure that God loves me!” he said.

Among the thousands of pilgrims present at the Paul VI audience hall were numerous student groups from Europe, including several children’s choirs from Italy and Spain.

When greeting the Italian-speaking pilgrims, the pope was interrupted by each choir who broke out in song to greet him.

Despite several applauses, one choir continued singing to the amusement of Pope Francis. He laughed heartily while praising them for their persistence in finishing the entire song.

Continuing a series of talks on Christian hope, the pope reflected on a passage from St. Paul’s Letter to the Romans in which the apostle says Christians “should boast in hope of the glory of God.”

The pope said boasting is “surprising” since from a young age, people are taught that boasting reflects “a certain pride” and reveals “a lack of respect for others, especially toward those less fortunate than us.”

“How is it possible to do this without offending, without excluding anyone?” the pope asked.

He explained that Christians are called first to “boast of the abundance of grace we have received in Jesus Christ” by “learning to read everything with the light of the Holy Spirit.”

“If we pay attention, acting — in our history, in our lives — we are not alone, but above all with God. It is he who is the absolute protagonist, who creates everything as a gift of love, who weaves the storyline of his plan of salvation and who fulfills it in us through his son,” the pope said.

By seeing one’s life illuminated by the Holy Spirit, he added, “we are at peace with God and experience freedom.”

However, the pope continued, St. Paul’s second invitation to boast in times of tribulation “is not easy to understand.”

While it may seem to be unrelated with the peace that comes from “boasting of the abundance of grace,” Pope Francis said that peace does not mean the absence of difficulties, but that “God loves us and he is always close to us.”

God’s love, he said, nourishes Christian hope that “doesn’t separate us from others, nor does it lead us to discredit or marginalize others.”

“Our greatest boast is having, as a father, a God who does not make preferences, who excludes no one, but rather opens his home to all human beings, beginning from the last ones to the far away so that as his children, we learn to console and support one another,” Pope Francis said.